The last Triple Crown prep run at Keeneland Race Course is the $200,000 Coolmore Lexington Stakes (G2), contested 2 weeks before the Kentucky Derby over a distance of 1 1/16 miles over the Polytrack. Summer Front was sent off as the 2-1 favorite in the field of 11, undefeated in 3 starts including the King Cugat at Aqueduct and the Dania Beach at Gulfstream. In to challenge him included 5-1 second choice Morgan's Guerilla, second in the Illinois Derby (G3) last out at Hawthorne, and 6-1 third choice Castaway, seventh in the Sunland Derby (G3) after winning his division of the Southwest Stakes (G3) at Oaklawn.

Jockey Garrett Gomez sent 7-1 Johannesbourbon to the lead first time past the stands and he set fractions of 23.21, 46.54, and 1:10.83 while pressed by Castaway and stalked by 18-1 Hammers Terror. Castaway tired on the far turn, as Johannesbourbon continued to lead to the 1/8 pole, but he tired badly late. 70-1 longest shot All Squared Away, 4th early and wide around both turns, took over inside the 1/8 pole and pulled away to a 1 1/2 length win over late-running favorite Summer Front in 1:42.55 over the fast Polytrack. It was a neck back to Hammers Terror third.

All Squared Away is not nominated to the Triple Crown and with only $129,400 in graded stakes earnings would not make the Kentucky Derby field anyway. He could be supplemented for $200,000 but any horse who is already nominated would have priority over him regardless of earnings. 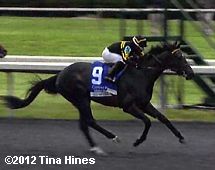 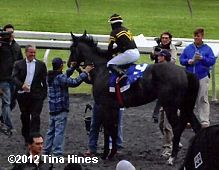 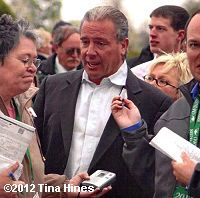 Left: All Squared Away returns after the race. Winning jockey Julio Garcia said, "My idea was to go very close to the pace. I rode this horse in the morning, and I knew he was going to run a good race today. I got confused a little bit: I didn't know which (finish line), the first or the second. So after the wire Johnny V (Velazquez, on Gold Megillah) told me, 'Julio, the first wire!' Like, I know, it's OK. I win anyway." Winning co-owner Peter Miller said by phone from California, "He ran a strong Spiral Stakes so I was surprised that he was 50-1 in the morning-line odds and 70-1 at race time. He's always trained like a good horse, like a quality horse. We are thrilled. Over the moon."

Right: Trainer Wesley Ward gets interviewed afterwards. Ward said, "Pete (Miller, co-owner and former trainer) called me right after the (Vinery Spiral) and asked me if I'd take the horse. He said, 'Just train him however you want.' Since the horse got here – as most do when they come to Keeneland – the horse just flourished. He just put a lot of weight on. He's eaten the bottom out of the feed tub. When we worked him, the last couple of works have just been outstanding. He's just thriving, being here. I'm really thankful to Pete Miller for giving me the opportunity to train – especially from a trainer." 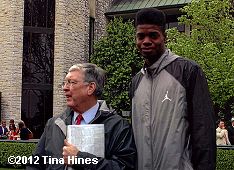 Nick Nicholson, President of Keeneland, was showing Nerlens Noel around at the races on Saturday. Noel was the #1 basketball recruit in the nation and chose to sign with the University of Kentucky earlier this month.