The feature race on the first Sunday of the 2020 Bing Crosby fall meeting at Del Mar was the $75,000 Let It Ride Stakes, a 1 mile Jimmy Durante Turf test for 3-year-olds, restricted to non-winners of $60,000 stakes races at 1 mile or over, other than state-bred. Conditions were excellent at the historic seaside oval, with sunny skies and temperatures in the mid 70's. Lane Way was sent off as the 2-1 favorite in the field of 10, making his stakes debut off a 2nd place finish in allowance company last out. In to challenge him included 5-2 second choice Strongconstitution, winless since his debut but here off a close 3rd in an allowance, and 9-2 third choice Margot's Boy, 7th in the Twilight Derby (G2) after finishing a close second in the Del Mar Derby (G2).

Jockey Edwin Maldonado sent 25-1 Dominant Soul to the lead first time by through fractions of 22.32, 45.62, and 1:10.16 while pressed by 63-1 Jammers Justice and stalked by Strongconstitution and 11-1 Rookie Mistake. Entering the stretch, the pacesetters tired as Rookie Mistake inherited the lead through 7f in 1:22.45 before tiring. Jockey Abel Cedillo sent Strongconstitution through on the rail to pass the tiring pacesetters and was all out to hold off late-running 7-1 Heywoods Beach to win by a head in 1:34.09. It was another 3/4 length back to favorite Lane Way third. 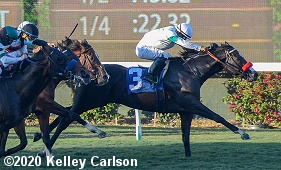 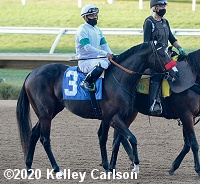 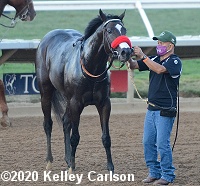 Left: Strongconstitution in the winner's circle. Winning jockey Abel Cedillo said, "Five wins today, wow. I was feeling lucky and when I won a close one with that first one (Spielberg by a neck in the first race), I had lots of confidence. Then I rode with that confidence from there on out. I'd won five races on a single day once before up at Golden Gate Fields, but this is a first down here. (Strongconstitution) ran strong in the stakes. We got through inside and he got it done."

Right: Strongconstitution in the paddock before the race. Leandro Mora, assistant to winning trainer Doug O'Neill said, "He was training really nice up to the race and that told us he was ready. We got pretty worried up to the last quarter mile because he got blocked pretty good. But when he got through on the rail we were praying for the other one (stablemate Rookie Mistake) get up there too, and it almost happened. Two winners, one a day (on opening weekend for Team O'Neill), which is nice and keeps everybody smiling." 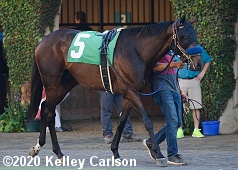 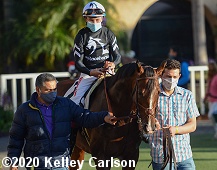 Left: Second place finisher Heywoods Beach in the paddock before the race. The John Sadler trainee improved his record to 2 wins, 2 seconds, and 1 third in 7 starts, earning $110,000 for owner Hronis Racing.

Right: Third place finisher and beaten favorite Lane Way in the paddock. The Richard Mandella trainee improved his record to 1 wins, 2 seconds, and 5 thirds in 8 starts, earning $89,680 for owners MyRacehorse.com and Spendthrift Farm.