The feature race on the first Saturday of the 2018 Bing Crosby fall meeting at Del Mar was the $75,000 Let It Ride Stakes, a 1 mile Jimmy Durante Turf test for 3-year-olds, restricted to non-winners of $60,000 stakes races other than state-bred. Conditions were excellent at the historic seaside oval, with clear skies and temperatures in the high 70's. Prince Earl was sent off as the 9-10 favorite in the field of 7, undefeated in 2 starts and making his stakes debut here. In to challenge him included 3-1 second choice Afleet Ascent, an allowance winner last out after finishing second in both the Oceanside and the Shared Belief, and 5-1 third choice Calexman, 5th in an allowance last out after finishing third in the Oceanside and the La Jolla Handicap (G3).

Jockey Geovanni Franco sent Calexman to a clear lead first time by and he set fractions of 23.42, 47.37, and 1:10.78 while pressed by Afleet Ascent and stalked by Prince Earl. Entering the lane, Calexman continued to lead through 7f in 1:22.49, but 22-1 longest shot Risky Proposition, 5th early under Joe Talamo, came out 4 wide for room and outfinished 14-1 Choo Choo to win by 3/4 length in 1:34.61 over the firm going. It was a head back to pacesetter Calexman third, and another head to favorite Prince Earl fourth. 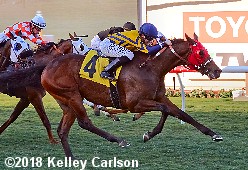 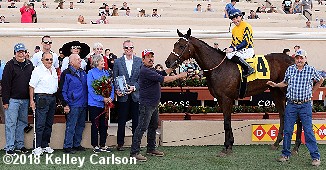 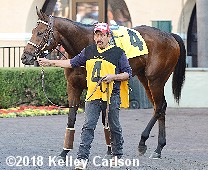 Left: Risky Proposition in the winner's circle. Winning trainer Bill Spawr said, "Better to be lucky than good! He was traveling so well under Joe. I could see him reaching out and really (running) with a lot of balance. I thought, 'This horse is going to run good,' and he did."

Right: Risky Proposition in the paddock. Spawr added, "The (owners) found the horse, and (they) asked us what we thought. We said, 'Our markings are good on him. He might be all right.' He's a good-bodied horse and I liked the breeding. He's got a lot of length to him. I was disappointed he ran so badly (sixth of seven) the day we (claimed) him, but he was on the rail on the dirt, so he had some excuses." He may go next in the Hollywood Derby (G1). 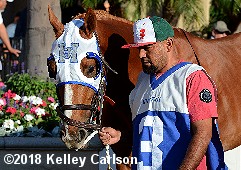 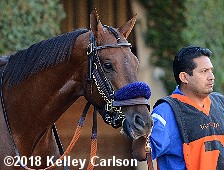 Left: Second place finisher Choo Choo in the paddock before the race. The Jerry Hollendorfer trainee improved his record to 2 wins, 1 second, and 2 thirds in 10 starts, earning $157,093 for owner-breeder Calumet Farm.

Right: Third place finisher Calexman in the paddock before the race. The Vladimir Cerin trainee improved his record to 2 wins, 2 seconds, and 3 thirds in 12 starts, earning $137,633 for owners Holly and David Wilson. 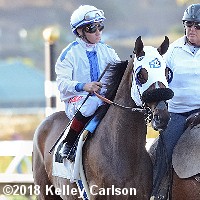 Fourth place finisher and beaten favorite Prince Earl in the post parade. The Phil D'Amato trainee has a record of 2 wins, 0 seconds, and 0 thirds in 3 starts, earning $86,778 for owners Todd Marshall, Andrew Molasky, and Irina Molasky.