Del Mar Thoroughbred Club in Southern California is hosting its inaugural Bing Crosby Season, a November meeting taking over race dates formerly held by the shuttered Hollywood Park. This is also the final race meeting to be run on Polytrack, as it will be replaced with dirt over the winter. The feature race on the first Saturday of the meeting is the $93,100 Let It Ride Stakes for three-year-olds going 1 mile around 2 turns of the Jimmy Durante Turf Course. Conditions were excellent with sunny skies and temperatures in the low 80's for the 9975 fans in attendance. Awesome Return, winner of the Snow Chief and the Silky Sullivan Stakes was sent off as the 8-5 favorite in the field of 9 off a 3rd place finish in an allowance last out. In to challenge him included 7-2 second choice Forever Juanito, second in the Uniformity Stakes last out at Santa Anita, and 7-1 third choice Home School, fourth in both the El Cajon and the Uniformity.

Jockey Elvis Trujillo sent 16-1 Final Step to a clear lead first time past the stands as he set fast fractions of 22.16 and 45.07 while as many as 8 1/2 lengths in front of Home School and 13-1 Number Five stalking him second and third. On the far turn, Final Step tired and gave way as Home School inherited a short lead through 3/4 in 1:10.23. Number Five came into the lane 3 wide and took over at the 1/8 pole through 7 furlongs in 1:22.48, but favorite Awesome Return, 7th early, came out 4 wide under Mike Smith and rallied to win going away by 1 1/4 lengths in 1:34.55 over the firm course. It was just a head back to late-running 8-1 Cabral third. 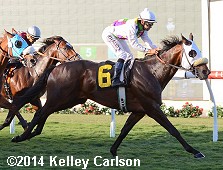 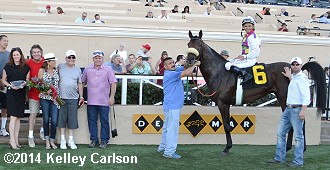 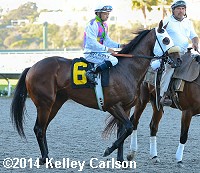 Left: Awesome Return in the winner's circle. Winning trainer Mike Puype said, "He got to playing a little bit in the stretch but the horse does that every time. He's never going to pull away and win by tons, but he still has a little bit left. He runs to his competition and, as always, you don't see Mike Smith make any mistakes." Smith added, "I might have cut him loose sooner than I should have because he was lagging back there, but in the end it didn’t matter."

Right: Awesome Return in the post parade. Asked about the turf course, which was problematic during the summer, Puype added, "I had absolute tremendous concerns with the turf course after that first race here (in the summer). That first week, every speed horse was winning. Then you had the political issues. We have a nice horse here. It was Russian roulette to see if they were going to work the problems out. It was a no-brainer to give him a month off. But this course definitely looks different than it did. It has more thatch, more grass to it. You’re going to have a better chance to come from behind on it." 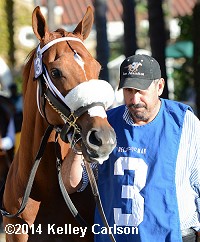 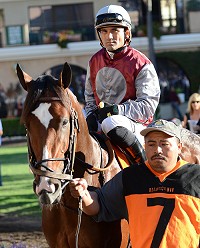 Left: Second place finisher Number Five in the paddock before the race. The 13-1 shot raced in 4th about 6 lengths off the pace early under jockey Tiago Pereira, rallied to gain the lead at the furlong pole but was outfinished. The Carl O'Callaghan trainee improved his record to 3 wins, 2 seconds, and 2 thirds in 12 starts, earning $139,630 for owner Michael Terry.

Right: Third place finisher Cabral in the paddock. The 8-1 shot was last early and 11 length off the pace under jockey Corey Nakatani, then rallied well but just missed second by a head, beaten 1 1/4 lengths. The Leonard Powell trainee improved his record to 2 wins, 2 seconds, and 3 thirds in 9 starts, earning $81,963 for owner-breeder Redmon Farm and co-owner Meridian Racing Club.