2012 "Road to the Derby" Kickoff Day at the Fair Grounds

Fair Grounds Race Course hosted its "Road to the Derby Kickoff"card on Saturday with six stakes races. It was overcast and windy with temperatures in the low 70's. The highlight of the afternoon was the $175,000 Lecomte Stakes (G3) for 3-year-olds going 1 mile 70 yards on the main track. The two-horse Zayat Stables entry of Z Dager and Dan and Sheila was sent off as the 3-1 favorite in the field of 13 (11 betting interests). Z Dager broke his maiden last out over the same trip, while Dan and Sheila won his debut at Gulfstream. In to challenge them included 7-2 second choice Mr. Bowling, winner of the Dover Stakes but third in the Iroquois (G3) at Churchill last out, and 5-1 third choice Shared Property, sixth in the Breeders Futurity (G1) at Keeneland atfer winning the Arlington-Washington Futurity (G3).

Jockey John Jacinto sent 8-1 Alexander Thegreat to the lead first time past the stands and he set fractions of 23.21, 47.22, and 1:12.88 over the fast track while pressed by 58-1 Hero of Order around the clubhouse turn and down the backstretch. On the far turn, the pacesetters tired as Mr. Bowling, 6th early, moved up to take the lead into the final furlong, getting the mile in 1:39.35. Z Dager, who stalked the early pace in 3rd, rallied late but Mr. Bowling held him off by a head to get the win in 1:43.49. It was another 1/2 length back to late-running Shared Property third.
Results Chart 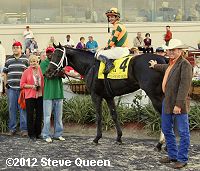 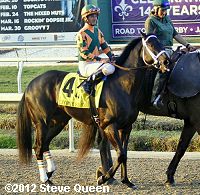 Left: Mr. Bowling in the winner's circle. Winning trainer Larry Jones said, "To be honest, we thought (Mr. Bowling) was just starting to get good. He's maturing at the right time. He really showed an affinity for this track when we got down here. I can tell he liked it better than anywhere we've been to this point. He pretty well got himself ready. Having Believe You Can, they've been work mates. They got each other ready and it paid off." Jockey Robby Albarado added, "I worked him in the morning. I saw a lot of fight in him. I figured if I could get him clear turning for home, and give him a chance to run home he would. When (Z Dager) ran to him late, he gave me some second effort." 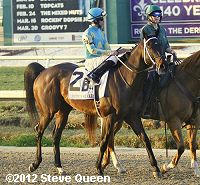 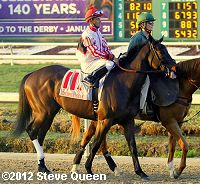 Left: Second place finisher and beaten favorite Z Dager in the post parade. Trainer Steve Asmussen said, "I think when he got to the other horses that other horse just kicked away from him a little bit. It was huge for his third race, coming out of a maiden race, to run as well as he did." Jockey Shane Sellers added, "I thought maybe I had that horse but when he saw daylight he kind of was a little bit green down the lane. He was a little green, and it kept him from spurting on with me, so he'll learn from it."

Right: Third place finisher Shared Property in the post parade. Jockey Leandro Goncalves said, "We drew the outside post and that wasn't to our advantage. I tried to get him to the inside a little more but I couldn't really get that done. He didn't have a very good trip. Then in the stretch he kept drifting to the outside and that hurt us a little. Also, he hadn't run in a long time."


The distaff counterpart to the Lecomte is the $125,000 Silverbulletday for 3-year-old fillies also going a mile and 70 yards on the main track. Summer Applause was sent off as the even-money choice in the field of 5, off a 7 length allowance win over the same distance and track on New Year's Eve. In to challenge her included 5-2 second choice Believe You Can, 6th in the Pocahontas (G2) after winning the Tempted (G3), and 3-1 third choice Inny Minnie, second in the Delta Princess (G3) last out.

Jockey Rosie Napravnik sent Believe You Can to the front and she set easy fractions of 23.82, 47.98, and 1:12.97 while 1 1/2 lengths in front of Summer Applause. Entering the stretch, Believe You Can continued to lead, opening up by 2 at the 1/8 pole, and cruised under the line 1 1/2 lengths ahead to win in 1:42.34 over the fast track. Summer Applause held off late-running Inny Minnie by a nose for second money.
Results Chart 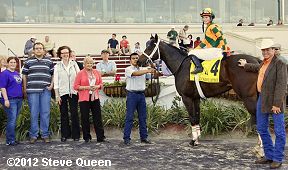 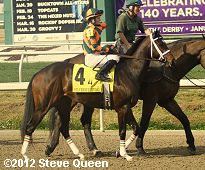 Left: Believe You Can in the winner's circle. Winning jockey Rosie Napravnik said, I've been working this filly a few times and she's really impressed me. I'm not going to lie, I was a little worried about the fractions, if we'd gone a little too fast, but she sure kicked in when we headed for the lane. She is a very, very talented filly." Trainer Larry Jones added, "Well, we were very confident that she'd go far, the Proud Citizens. I've probably had more than any of them. If they are good sprinting, they are better going long. She came out of a nice female family that could stretch out so we didn't have a lot of problem about that."Jones said Believe You Can will go next in the Rachel Alexandra Stakes on February 25. 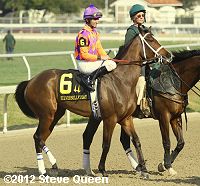 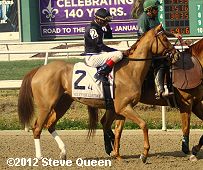 Left: Second place finisher and beaten favorite Summer Applause in the post parade. Jockey Robby Albarado said, "After the break I didn't want to go balls to the wall with that horse for the first half of the race. I rode my filly like I did last time – I let her break and get away from there easy. I thought she ran a big race, big enough to go on to the next one."

Right: Third place finisher Inny Minnie in the post parade. She settled in fourth 4 lengths back early under jockey John Velazquez, and just missed second money by a nose. The Steve Margolis trainee improved her record to 1 win, 3 seconds, and 1 third in 5 starts, earning $162,500 got owner Jake Ballis. 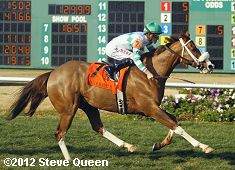 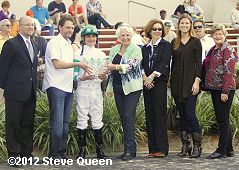 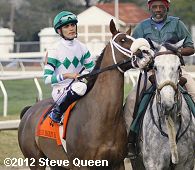 Left: The trophy presentation for the Colonel E.R. Bradley Handicap.

Right: Mr. Vegas in the post parade. Winning jockey Miguel Mena said, "This horse kind of gets out a little bit. running sideways. I just did my best to keep him straight and I didn't think I bothered the other horse. He kind of stopped riding a little bit but I was clear, like a length in front, and he was beat anyway."Trainer Richie Sherer added, "He was supposed to sit off the pace. He made the lead and relaxed real well and Miguel did a good job." 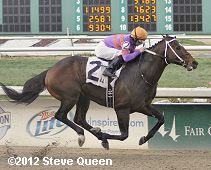 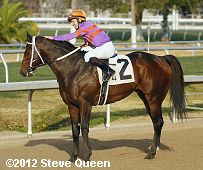 A field of eight went in the $100,000 Louisiana Handicap for older horses going 1 1/16 miles on the main track. 5-1 fourth choice Thiskyhasnolimit battled for the lead with 8-1 WOldly through fractions of 24.70 and 48.71, before Worldly dropped from contention. Thiskyhasnolimit got 3/4 in an easy 1:13.28, and easily held off late-ruynning 7-2 second choice Fast Alex by a length in 1:43.67. It was another 3/4 length back to 2-1 favorite Alma d'Oro third.
Results Chart

Winning trainer Steve Asmussen said, "He needed a freshening and he's come back really well. He's put in some tremendous work and just thought this was a good spot for him. Shane gave him a great trip. I think he was pretty fortunate that the deal didn't have much pace in it and it went his way, but it's a great spot for him to come back in."Jockey Shane Sellers added, "He told me to play him off the break, but knowing, looking on paper that he was going to be fresh. He said, all things considered, he probably would be there. And, you know, take what they give you. And if you don't break well, ride him from there, and he's a good horse, ride him accordingly." 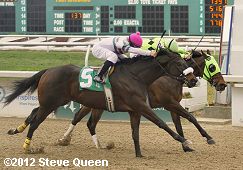 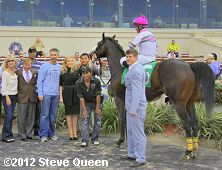 Winning trainer Ron Fauxheux said, "We just prepared him the same way as the last race. I think this race might have been closer than the last one." Jockey Richard Eramia said, "I thought I had a lot of horse (turning for home). In the last quarter-mile I put it together but the other horse was coming back. But this horse has got a big heart and he tried very hard." Owner Evelyn Benoit added, "I don't think the horse could look any better than he did today. I was shocked. He just improved off of the last race and Ron, give it all to him, he brought this horse from New York for me. Just got him conditioned perfectly." 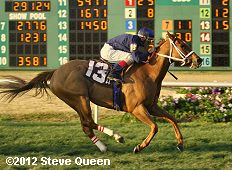 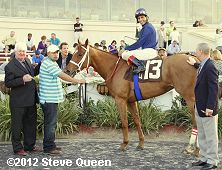 The $75,000 Pan Zareta Stakes saw 10 older fillies and mares sprint about 5 1/2 furlongs on the turf. 15-1 Inspired went to the lead immediately with a 2 length advantage down the backstetch throuygh a quarter in 22.11. On the turn, Inspired opened up a commanding 6 length lead through a half in 45.33. 2-1 favorite Wild About Marie, 6th early, put in a late rally but Inspired cruised past the post 3 lengths in front in 1:03.47 over the good turf. It was another 1 1/4 lengths back to 4-1 Flash Mash third. The race was marred by the breakdown of 5-2 second choice Rapport on the far turn.
Results Chart

Winning trainer Allen Iwinski said, "The last time she ran, Johnny came back and said, ‘Man, she doesn't like it, we were trying to rate her off the leads' and in that race there was a lot of speed and she just sort of flattened out down the stretch. He had said to just let her run free and not take a hold of her and it turns out that was the right thing to do." Jockey John Velazquez added, "The way I was going to get her out of there, she was going to be on the lead. She broke out of there and I wanted to keep her off the rail anyway so it worked out great."