2008 "Road to the Derby" Kickoff Day at the Fair Grounds

Fair Grounds Race Course hosted its "Road to the Derby Kickoff" card on Saturday with six stakes races each for a $100,000 purse. Conditions were idea with a fast main track, firm turf, clear skies, and temperatures in the mid 50's. The highlight of the afternoon was the Lecomte Stakes (G3) for 3-year-olds going 1 mile on the main track. Blackberry Road was sent off as the 3-1 favorite in the field of 8, exiting a runner-up finish in the Kentucky Jockey Club Stakes at Churchill Downs. In to challenge were 7-2 second choice Macho Again, second in an allowance last out, and 4-1 third choice The Darp, runaway winner in a maiden over the same track and distance in December.

The Darp went to the lead right away and set a pace of 24.39 and 48.36 around the clubhouse turn and midway down the backstretch, with 10-1 He's Eze stalking him the whole way. Entering the stretch, The Darp tired and dropped from contention allowing He's Eze a brief taste of the lead after 3/4 in 1:12.90, but he too would tire from the early pace. 11-1 Mad Flatter, who had stalked the pace in fourth, moved up to challenge and took a short lead with a furlong to go, but 5-1 Z Fortune, who came out wide into the lane after racing fifth early, ran by to win going away by 2 3/4 lengths over favorite Blackberry Road who put in a strong rally from seventh. The running time was 1:37.79. It was another 1 1/2 lengths back to Mad Flatter in third.
Results Chart

Winning trainer Steve Asmussen said, "He's a very good 3-year-old who shipped from New York. My job is to try to figure out how to win the (Kentucky) Derby with him. We'll try to map out a plan. He's a good horse." Jockey Shaun Bridgmohan added, "I got him to relax. We had a great trip; we were just sitting pretty. When I showed him some room, he just got running." 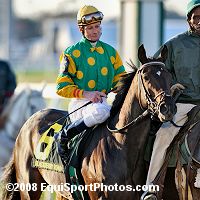 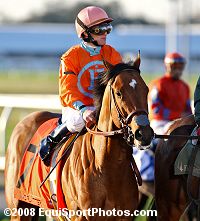 Left:Second place finisher Blackberry Road. His jockey Calvin Borel said,"I am very happy. The fractions were slow up front. I am very happy he is relaxing because that is what we want right now."

Right: Third place finisher Mad Flatter. The 11-1 shot raced wide throughout in fourth most of the way under jockey James Graham, taking over the lead midstretch but was no match for the first two, holding on for third at the finish. The Jeff Thornbury trainee improved his record to 2 wins, 1 second, and 1 third in 4 starts, earning $66,752 for owner Bonnie Heath Farm LLC.


The distaff counterpart to the Lecomte is the Tiffany Lass for 3-year-old fillies also going a mile on the main track. Debut maiden winner Tizaqueena was sent off as the 6-5 favorite in the field of 7, over 7-2 second choice and allowance winner Diamondaire and 4-1 Jolie the Cat, winner of a maiden in her third try last out.

Jockey James Graham sent Jolie the Cat to the lead right away and she set a controlled pace of 24.61, 48.89 and 1:13.78 while as many as 1 1/2 lengths clear of Tizaqueena who stalked her in second. Entering the stretch, Graham asked Jolie the Cat for run and got it as she pulled away through the lane to win by 2 1/2 lengths in a slow 1:38.56. It was another 1 1/2 lengths back from Tizaqueena to 5-1 Highest Class in third.
Results Chart

Winning trainer Steve Asmussen said, "We thought it was quite possible (the slow fractions) would be the case. James did a great job. That was what we were expecting when she came out of (her second career start) at Saratoga. She's good enough. She beat a very good filly in Tizaqueena." Her jockey James Graham added, "As soon she relaxes, you can do anything you want with her. She's very game, she's not very big, but she has a big heart. This has turned out to be a really great day." 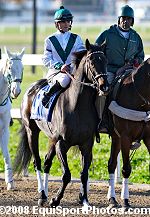 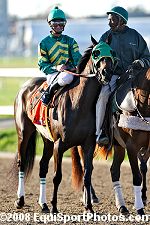 Left: Second place finisher Tizaqueena. Her jockey Jamie Theriot said, "She tried. She ran her race. She had perfect fractions. She just got outrun today."

Right: Third place finisher Highest Class saved ground around both turns in midpack early under Robby Albarado, came out into the lane but had no late rally, finishing third. The Neil Howard trainee improved her record to 2 wins, 0 seconds, and 1 third in 6 starts earning $65,666 for owner Briarwood Stable. 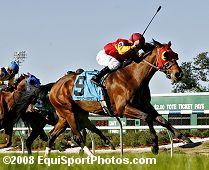 The Colonel E.R. Bradley Handicap (G3) featured a field of nine older horses going about 1 1/16 miles on the turf course. 3-1 second choice Save Big Money battled on the pace with 8-1 Optimizer through fractions of 24.97, 50.97, and 1:15.57. Entering the stretch, 11-1 French Beret, who had settled just off the rail in third down the backstretch, moved up three wide and took over the lead in mid stretch. 29-1 longshot Major Rhythm put in a strong rally from fourth but was no match for the winner, was French Beret cruised under the line 1 3/4 lengths clear in 1:45.83. It was just a nose back to 2-1 favorite Sterwins in third.
Results Chart

Winning trainer Mark Frostad said, "He ran a good race last time. James had him covered up until right around the turn. He ran a big race." Jockey James Graham added, "This horse has tons of class. He tries his heart out every time. The distance was not going to bother him. The drying ground with a closer today, I thought would help us big." 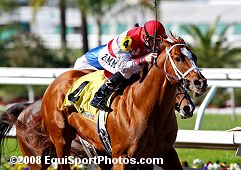 A field of eight older horses sprinted 6 furlongs in the F.W. Gaudin Memorial Stakes. 4-1 third choice Euroears stalked the pace set by 9-2 Stormin Baghdad through a quarter in 21.43 and a half in 44.40, before gaining the advantage at the 1/8 pole to prevail by 3/4 length in 1:09.43. It was another 2 1/2 lengths back to 3-1 second choice Semaphore Man in third. 2-1 favorite Gunfight was off slow and showed no rally, finishing last.
Results Chart

Winning trainer Bret Calhoun said, "He seems to really relax easy. We had an inexperienced horse stepping up against an experienced group of horses. He did everything that we asked him to do. Today was a big test against some good competition, and he passed with flying colors. We knew he was fast, but it looks like he has a lot of heart." Jockey Ramsey Zimmerman added, "He can go that fast and be real comfortable. The pace doesn't seem to bother him." 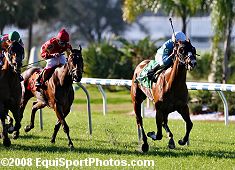 The Dr. A.B Leggio Memorial Stakes saw 8 older fillies and mares sprint about 5 1/2 furlongs on the turf. 5-1 third choice Cat On A Cloud set the early pace of 22.30 and 46.39 over the firm turf but faded entering the stretch. 6-5 favorite Smitty's Sunshine, who had stalked her down the backstretch, opened by a 1 1/2 length lead in mid stretch but was soon passed by four horses in a cavalry charge. At the line, 9-1 Danceoftherealm prevailed by 1/2 a length over 5-2 second choice Flying Circle, who was in turn a neck ahead of 10-1 Kindling in third. The running time was 1:04.59. Smitty's Sunshine was fifth.
Results Chart

Winning trainer Malcolm Pierce said, "This filly ran huge today. I ran her back a little quick (last start was 15 days ago), but her last was so easy she deserved a shot here. She beat a quality field of horses here. This win increases her value, now she's a stakes winner." Jockey Miguel Mena added, "She broke well and we got to the inside. At the three-eighths pole, I smooched her a little and she started flying. I'm very impressed she ran so well after 15 days." 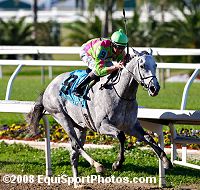 A field of nine went in the Louisiana Handicap for older horses going 1 1/16 miles on the main track. 11-1 Port Clyde set the pace around the clubhouse turn through fractions of 23.59 and 46.60 while being stalked by 14-1 Silver Lord. On the far turn, Silver Lord moved up to take over the lead as Port Clyde faded to finish last. Silver Lord opened up a 3 length advantage and cruised under the line 2 lengths ahead of 13-1 Prom Shoes in 1:43.61. It was a neck back to 22-1 Real Dandy in third, while 2-1 favorite Crossword showed no rally and finished fifth.
Results Chart

Winning trainer Steve Asmussen: "He's a runner. My father had him at El Primero (the family's training center) and said he has tons of talent. This was a little ambitious, but it worked out." Jockey Corey Lanerie added, "I knew we were going fast, but his stride is so long and easy. I took a look back at the quarter pole to see if anyone was coming. I kept hard into him. He put his ears up and kept giving me more. Last time out, I felt we finished really well."