Woodbine Racetrack in Toronto kicked off its 53rd season of Thoroughbred racing on Saturday April 4th with a 10-race card. Conditions were less than ideal for the 2009 opening, as horses and riders faced a stiff headwind through the homestretch of 39 with gusts of up to 50 miles per hour, with temperatures in the high 30's.

The feature race on opening day was the $100,000 La Voyageuse Stakes for Ontario-bred 3-year-old fillies going 5 furlongs on the Polytrack. High Mist was sent off as the 7-5 favorite in the field of 7, despite finishing a well-beaten 5th last time out in the Princess Elizabeth Stakes in November. In to challenge the Reade Baker trainee included 3-1 second choice Pretty Katherine, winner of an allowance at Golden Gate last out for trainer Jerry Hollendorfer, and 5-1 third choice Double Malt, winner of two straight going in including the South Ocean in November.

Soon after the start, 7-1 Mullins Beach and 6-1 Sans Souci went for the early lead and battled through the first 1/2 mile through fractions of 22.24 and 45.99. At the 3/16 pole, jockey Patrick Husbands urged Mullins Beach, who found another gear and pulled away through the final furling to win going away by 3 3/4 lengths in 58.59. Sans Souci held off late-running favorite High Mist for third place by a nose. 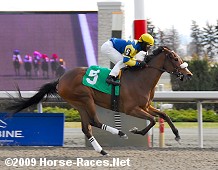 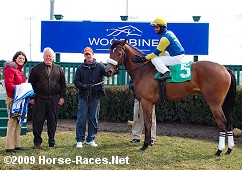 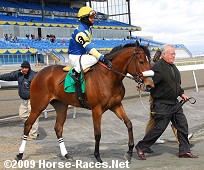 Right: Mullins Beach returns after the race. Winning jockey Patrick Husbands, who won 3 races on opening day, said, "I really didn't want to be where she was, but she broke so sharp. I left her alone. She ran a big race." 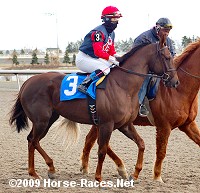 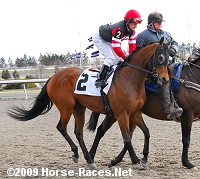 Left: Second place finisher Sans Souci in the post parade. Sans Souci pressed the pace to the inside of Mullins Beach early under new jockey Chantal Sutherland, but ran on to save second place money. The Mike Doyle trainee improved her record to 1 win, 3 seconds, and 3 thirds in 9 starts, earning $155,451 for owner-breeder Eaton Hall Farm and M.J. Doyle Racing Stables.

Right: Third place finisher and beaten favorite High Mist in the post parade. 7-5 favorite High Mist had early speed to press the pace under new jockey Jim McAleney, but backed off on the turn and came on again late to finish third. The Reade Baker trainee improved her record to 3 wins, 0 seconds, and 1 third in 5 starts, earning $176,420 for owners N.C. Stables and Wendy Anderson.

Opening day also saw the debut of Woodbine's new $400,000 starting gate. Interestingly, the new gate, which is 50 feet long and weighs 5 tons, is an exact clone of the old model which had served the track for 30 years, but with subtle differences such as wider, softer tires more suited for Polytrack and turf, and a new blue and white color scheme. Woodbine vice-president of operations Eddie Stutz said, "We had the new gate built from scratch. No one in the industry has a heavy, solid gate like ours, so we just duplicated what we had and built it ourselves. It’s a Woodbine exclusive. We looked at gates from all over the world and they were too light. We wanted a solid, strong gate that was specifically dedicated to racing. The two we used for years will be there for training and schooling."

Retired jockey Robert King, national secretary-manager of the Jockeys' Benefit Association of Canada, expressed approval saying, "We want a quiet, heavy gate. The stalls are snug, so a horse has less a chance to misbehave and one that acts up in a stall in the aluminum models could cause chain reactions three and four stalls away. The gate is simply superior to other models out there. The horsemen and the jocks will love it." 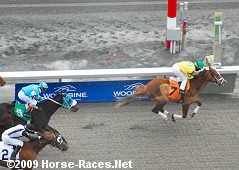 In the season opener, a $10,000 claimer for older non-winners of two, 3-1 third choice Flashy N Classy, who stalked the pace set by 2-1 favorite Theboyscanwin through a wind-aided first quarter of 21.62, took over the lead at the 3/16 pole and won going away by 1 3/4 lengths over late-running 5-2 second choice Master Manipulator. The running time was 59.13 seconds for the 5 furlong sprint over the Polytrack.

Winning jockey Chantal Sutherland said, "It feels really cold and really windy. At 5 furlongs, I just try and get them out of the gate and get them in front. The wind was so strong down the stretch once I got the lead I was hoping they couldn’t catch me."