The feature race on closing weekend of the L.A. County Fair Meet at Los Alamitos Race Course is the $200,000 Los Alamitos Futurity (G2) for 2-year-olds going 1 1/16 miles, and is a points-scoring race in the Road to the Kentucky Derby. New for the 2021 Derby, starters in Road to the Derby races must run without Lasix in order to quality for points. Conditions were typical for Orange County in late December, with sunny skies and temnperatures in the low 70's. Red Flag was sent off as the 9-10 favorite in the field of 6 off a 2 race win streak including the Bob Hope Stakes (G3) at Del Mar last out. In to challenge him included 9-5 second choice Spielberg, 4th in the Bob Hope after breaking his maiden at 4th asking, and 6-1 third choice Petruchio, who broke his maiden last out over the Del Mar turf.

Jockey Abel Cedillo sent The Great One to the lead first time by through fractions of 23.01, 47.15, and 1:10.66 while pressed by 21-1 Weston and stalked by Red Flag and Spielberg. Turning for home, The Great One continued to lead by 2 lengths through 1 mile in 1:35.81, but Spielberg, confidently handled by Flavien Prat, came out 3 wide for room and rallied to get up by a head-bob in 1:42.56. It was another 3 1/4 lengths back to Petruchio third, and 5 more to favorite Red Flag fourth. 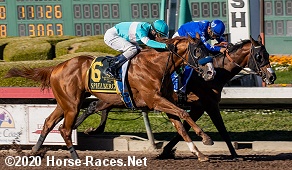 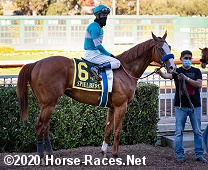 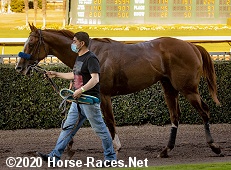 Left: Spielberg in the winner's circle. Winning trainer Bob Baffert said, "(The Great One) was tough to get by. We needed every bit of that stretch and we were fortunate to get there. I didn't know if I was going to run him here and I didn't decide until after he worked well this week (six furlongs in 1:13 2/5 Dec. 13 at Santa Anita). I knew he was going to run well because he had shipped well over here and he was really on it in the paddock. I'm just happy for everybody in the ownership group."

Right: Spielberg heads back to the barn after the race. Baffert added, "Now we can start thinking (Kentucky) Derby. It starts here for us. I thought it was an easy spot last time (fourth as the 3-5 favorite in the Bob Hope) and he didn't ship well. He got nervous when he got in the stall there and was just flat. We ran him back too quick. I asked Prat if there's more there and he said there's a lot more. I think he'll get better with maturity. He's a beautiful horse." 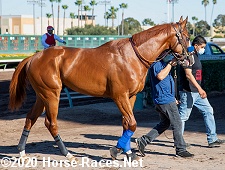 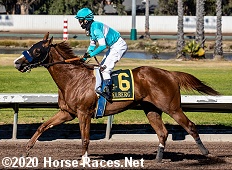 Left: Spielberg enters the paddock before the race. Winning jockey Flavien Prat said, "I'd never ridden him before, but Bob (Baffert) told me he was doing great. The outside was a good draw for him. He broke well and was able to relax. I thought we had it all the way down the stretch but it was close." This is the seventh straight Los Alamitos Futurity win for Baffert, and 13th overall. However of his 13 winners only 1997 winner Real Quiet (when the race was run as the Hollywood Futurity) would go on to win the Kentucky Derby.

Right: Spielberg returns after the race. Co-owner Jack Wolf said, "(Spielberg) reminded me of Authentic in his early days. He couldn't get his mind on business. I didn't notice but I guess he got whacked a couple times on his right side and the rider got him over there (on top). I thought we got the (head) bob, but you never know with those kind of things. It was very exciting." I'm not sure this makes him a bonafide stallion prospect, but a Grade 2 winner and Grade 1-placed, it sounds pretty good to me." 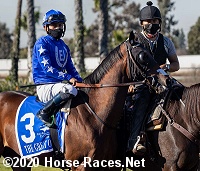 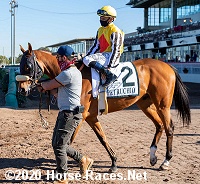 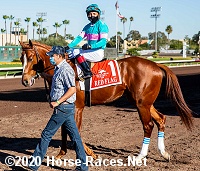 Left: Fourth place finisher and beaten favorite Red Flag heads out for the post parade. The John Shirreffs trainee has a record of 2 wins, 0 seconds, and 0 thirds in 4 starts, earning $106,100 for owners Jerome and Tina Moss.

Right: Shortly after the start of the Los Alamitos Futurity.