The feature race at Monmouth Park on Saturday was the $400,000 Lady's Secret Stakes, originally scheduled for August 1 for a $150,000 purse at 1 1/16 miles, but was moved to July 24 and extended to 1 1/8 miles this year to attract 2009 Horse of the Year Rachel Alexandra, returning to the track where she won the Haskell. Officially 12,859 came through the turnstiles but this was inflated by the Rachel Alexandra T-shirt giveaway, as spectators and participants braved temperatures approaching 100 degrees. As expected, Rachel Alexandra was sent off as the 1-10 favorite in the field of 7, off her 10 length romp in the Fleur de Lis (G2) at Churchill Downs after two straight runner-up finishes to start the year. In to challenge her included 8-1 second choice Queen Martha, second in a Monmouth allowance last out after shipping in from England, and 12-1 third choice Stage Trick, off a third place finish in the Obeah (G3) at Delaware Park.

When the gate opened, jockey Joe Bravo hustled Queen Martha to the lead and she set easy fractions of 23.93, 47.92, and 1:12.30 over the fast track, saving ground on the rail around both turns. Calvin Borel moved Rachel Alexandra one path outside the pacesetter, sitting just a length behind, while Stage Trick stalked the front pair in third. On the far turn Rachel Alexandra eased on past Queen Martha, taking over the lead at the 1/4 pole. Through the stretch, Rachel Alexandra pulled away to win by 3 lengths at the line, completing the 1 1/8 mile trip in 1:49.78. It was a long 7 3/4 lengths back to late-running 28-1 Ask the Moon third. 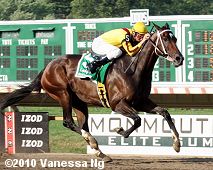 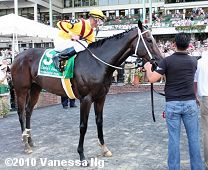 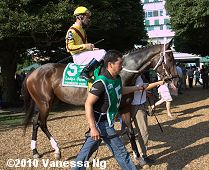 Right: Rachel Alexandra in the paddock before the race. Her trainer Steve Asmussen said, "We're very pleased with her, how she ran today. It was an awfully warm day, and she kept her composure. She was very relaxed off the other mare, she was in a very good rhythm . The first thing Calvin said when he came off her was he loved how she came home today, and I think that will be the key to her future success. I love where her mind is at right now. She’s more mature and she’s carrying a little more weight. Jess (Jackson, owner) was very happy with how she looked. He'll be up to Saratoga to visit her this week and we'll sit down and talk about (her next race). The plan is she'll have two more races before the Breeders' Cup, and the Personal Ensign was one that was mentioned. 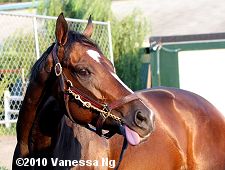 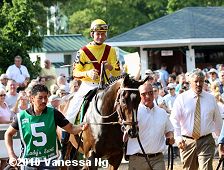 Left: Rachel Alexandra back at the barn.

Right: Rachel Alexandra in the paddock before the race with assistant trainer Scott Blasi and trainer Steve Asmussen. Her jockey Calvin Borel said, "I was comfortable where I was, going at that speed. I had (Queen Martha) measured. From the 3/16 pole to the 1/4 pole, I just shook my stick at her a few times and then hand-rode her in. What really impressed me was her last 1/4 mile. I think it was one of her best races. I let her run a little bit in the stretch to make sure she got something out of the race, but I think we saved a little bit in the tank for next time." 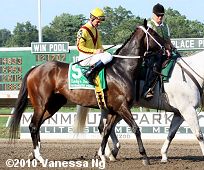 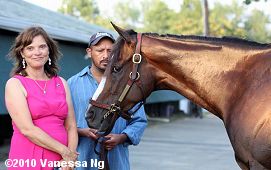 Right: Owner Barbara Banke with Rachel Alexandra back at the barn. Banke, wife of majority owner Jess Jackson said, "No anxious moments. This race fit really well, and we love what they're doing here at Monmouth Park." Jackson was back in California, "because the heat might have been too much for him." 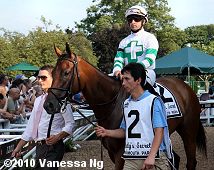 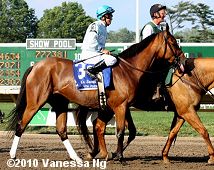 Left: Second place finisher Queen Martha heads out of the paddock before the race. Her jockey Joe Bravo said, "Patrick (Biancone, trainer) had this horse ready. He said, 'We're obviously dealing with the Horse of the Year, just ride your horse.' You know, it took Rachel to beat me. My horse didn't give in easy. I'm real proud of her."

Right: Third place finisher Ask the Moon in the post parade. The 28-1 shot raced in fifth 3 lengths off the pace early under new jockey Jeremy Rose, then passed tiring horses on the inside to get third beaten 10 3/4 lengths. The Edward Allard trainee improved her record to 8 wins, 2 seconds, and 4 thirds in 22 starts, earning $321,950 for owner Cheval Corporation. 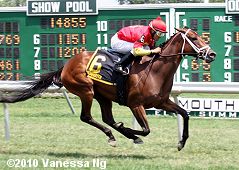 On the undercard of the Lady's Secret was the $100,000 Desert Vixen Stakes for 3-year-old fillies going 1 1/16 miles on the turf. Triple Cream, third in the Boiling Spring Stakes (G3) last out, was sent off as the 6-5 favorite in the field of 5 over 9-5 second choice Profiteroles, an allowance winner last out, and 3-1 third choice Jody Slew, off an 8th place finish in the Regret (G3).

Jockey Carlos Marquez Jr. sent 15-1 longest shot Island Time to the front and down to the rail first time past the stands and she set early fractions of 23.81, 47.56, and 1:10.85 over the firm course while being stalked by 6-1 Potosina to her outside and Triple Cream to her inside. Entering the stretch, Triple Cream moved up to challenge but Island Time turned her away, drawing off in the final furlong to win by 1 1/4 length in 1:40.03. It was a long 3 1/2 lengths back to Potosina third.
Full results chart from DRF 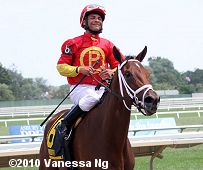 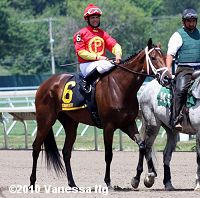 Left: Island Time returns after the race. The 15-1 longest shot set a comfortable pace on the inside under Carlos Marquez Jr. and had plenty left late to turn back the favorite. The Jason Servis trainee improved her record to 3 wins, 1 second, and 0 thirds in 7 starts, earning $111,720 for owners Bill and Vicki Poston. 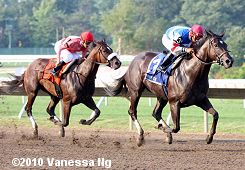 The feature race on Friday was the $100,000 Dearly Precious Stakes for 3-year-old fillies sprinting 6 furlongs on the main track. Whoopi Kitten, second in the Crank It Up Stakes last out, was sent off as the 6-5 favorite in the field of 6 over 8-5 second choice Beyondallboundarys, an allowance winner last out, and 4-1 third choice Dances With Ashley, 11th in the Acorn (G1) at Belmont. 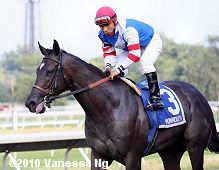 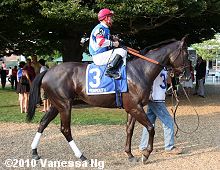 Left: Beyondallboundarys returns after the race. Her jockey Paco Lopez said, "The outside horse (Whoopi Kitten) went to the front, so I was able to relax in behind her. Turning for home, I started to ask her for more and she just ran down the leader."

Right: Beyondallboundarys in the paddock before the race. The 8-5 second choice tracked the pacesetter on the rail, saved ground on the turn, then came out for room, drawing clear late. The Tom Amoss trainee improved her record to 3 wins, 1 second, and 0 thirds in 5 starts, earning $112,160 for owner Ronnie Larmarque.