The feature race at Santa Anita on Saturday was the $200,000 La Canada Stakes (G3) for older fillies and mares going 1 1/16 miles on the main track. Conditions were excellent in Arcadia, with sunny skies and temperatures in the low 70's. Clement L. Hirsch Stakes (G1) winner Fighting Mad was sent off as the 4-5 favorite in the field of 7 off her third place finish in the Zenyatta (G1). In to challenge her included 3-1 second choice Hard Not to Love, a close second in the Zenyatta, and 15-2 third choice Sanenus, 2nd in the Chilukki (G3).

Jockey Ricardo Gonzalez sent Hard Not to Love to the lead first time by through an opening quarter of 23.30 before Fighting Mad took over on the backstretch through a half in 46.37 pressed by Hard Not to Love and stalked by Sanenus. On the far turn jockey Umberto Rispoli sent Sanenus 3 wide to sweep to the front through 3/4 in 1:11.28. Kept to task by Rispoli, Sanenus drew off through the stretch to win by 6 lengths over late-running 14-1 Miss Stormy D in 1:45.44. It was a nose back to Hard Not to Love third, while favorite Fighting Mad faded to finish 5th beaten 12 3/4 lengths. 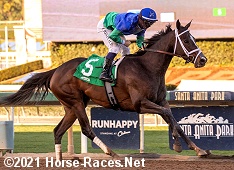 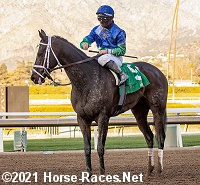 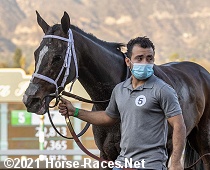 Left: Sanenus in the winner's circle. Winning trainer Mike McCarthy said, "Umberto did a great job, he had to niggle a little bit at her to kind of keep her in the game around the first turn. I thought she was in a great position up the backside and she went up to engage those fillies leaving the half mile pole."

Right: Sanenus heads back to the barn. McCarthy added, "At the quarter, she had her ears up and I love the way she opened up. The La Canada has a great history and a lot of really nice mares have won this race over the years and this is a nice race to have on her resume." 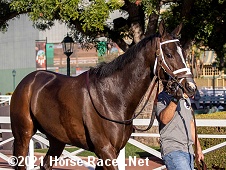 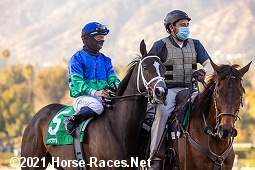 Left: Sanenus in the paddock before the race. Winning jockey Umberto Rispoli said, "I've been on her several times in the morning. I knew she was a very good filly. Today, I asked her a bit at the half mile pole and she responded well." Right: Sanenus in the post parade. Rispoli added, "At the top of the stretch, she was looking around and I was just hoping she was going to stay focused. She finished well and I think she has more there." 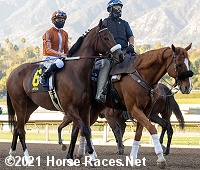 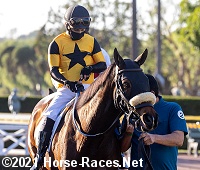 Right: Third place finisher Hard Not to Love in the paddock before the race. The John Shirreffs trainee improved her record to 5 wins, 3 seconds, and 2 thirds in 11 starts, earning $592,980 for owners Mercedes Stables, West Point Thoroughbreds, Scott Dilworth, Dorothy and David Ingordo, and Steve Mooney. 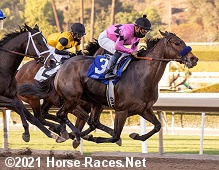 Right: The horses break from the gate for the La Canada Stakes. 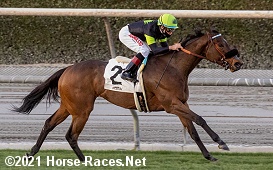 Immediately after the La Canada, a field of 6 older fillies and mares contested the $100,000 Las Cienegas Stakes (G3),a 6 furlong turf sprint out of the new backstretch chute. Jolie Olimpica was sent off as the even-money choice, unraced since a close second in the Jenny Wiley Stakes (G1) at Keeneland in July. In to challenger her included 5-2 second choice Oleksandra, 9th in the Breeders' Cup Turf Sprint (G1) after winning the Jaipur (G1), and 3-1 third choice Lighthouse, unraced since winning the Music City Stakes in September.

At the start Lighthouse broke outward bumping 9-1 Superstition into Oleksandra, causing Oleksandra to unseat jockey Joel Rosario. 23-1 longest shot Bohemian Bourbon was quickest out of the chute through an opening quarter of 21.58 while pressed by 16-1 Charmaine's Mia. On the turn Charmaine's Mia swept to the lead through a half in 43.80. Confidently ridden by Drayden Van Dyle, Charmaine's Mia drew off late to win by 2 1/2 lengths over late-running favorite Jolie Olimpica in 1:07.81. It was another 1/2 length back to Lighthouse third. After a stewards' inquiry, Lighthouse was disqualified and placed "unplaced" for causing Oleksandra to lose her rider, moving fourth place finisher Superstition up to 3rd. 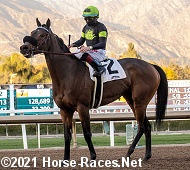 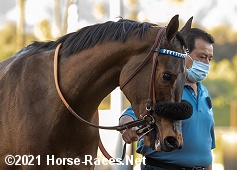 Left: Charmaine's Mia in the winner's circle. Winning trainer Phil D'Amato said, "I've learned with some of these horses coming in from Woodbine, that because they've got a deeper turf up there, this is their first chance to run over a firm turf and sometimes, they just float over it and she did just that. She had trained phenomenally well on the training track here. I haven't had a horse get over this training track this well since (multiple Grade 1 winner) Obviously."

Right: Charmaine's Mia heads back to the barn after the race. Winning jockey Drayden Van Dyke said, "I've never been on her before, but Phil just told me she was working lights out. She was sitting on a big race that's all I knew about her. He said, ‘Play the break wherever you are, and go from there.' She was doing it so easy, she had her ears pricked up and she was enjoying herself so I wasn't taking anything away from her. I knew she was going to show another gear at the top of the lane, if I had any competition behind me that was going to run me down, but I had too much horse for them to catch me. She ran a hell of a race." 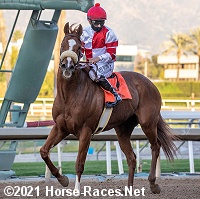 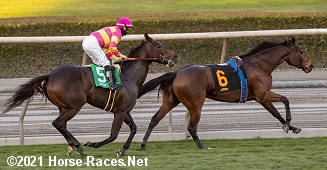 Right: Third place finisher Superstition (moved up from 4th via disqualification) behind Oleksandra who lost her rider shortly after the start. The Richard Mandella trainee improved her record to 2 wins, 2 seconds, and 1 third in 6 starts, earning $104,820 for owners Perry and Ramona Bass. 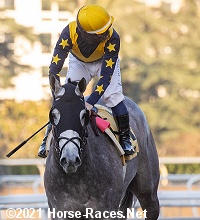 Third place finisher Lighthouse, who was disqualified to fifth, returns after the race. Following a stewards'inquiry, Lighthouse was disqualified from third and placed unplaced for drifting out shortly after the start and forcing Superstition into Oleksandra, causing Oleksandra to clip heels and lose her rider.