The Kentucky Cup Day of champions is the signature event of the fall meeting at Turfway Park, featuring 5 races over the Polytrack which can potentially be used as prep races for the Breeders' Cup World Championships. Fans enjoyed a sunny day with temperatures in the low 80's, making for ideal racing conditions for both spectators and participants. Thanks to photographer Amber Chalfin for these photos. 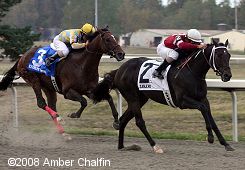 The highlight race of the day was the $350,000 Kentucky Cup Classic (G2), a 1 1/8 mile trip over the Polytrack for older horses. Iselin Handicap winner Honest Man was sent off as the 8-5 favorite in the field of 6, making his first start over synthetic, over 2-1 Stream Cat , sixth in the Arlington Million after winning the Arlington Handicap. Zanjero, the 5-2 third choice, comes into the race off a win in the West Virginia Governor's Stakes at Mountaineer.

Honest Man went to the front immediately under jockey Terry Thompson and set fraction of 23.66 and 47.62 while as many as 2 lengths ahead of 42-1 longest shot Canela in second. 12-1 Extreme Supreme, who had stalked the pace in third early, put in his bid after 3/4 in 1:11.88, but Zanjero, who had raced in fifth early, was steadily gaining on the leaders. Splitting horses at the top of the lane, Zanjero drew even with Extreme Supreme at the 1/8 pole and ran by him, cruising under the line 1 1/2 lengths clear in 1:49.27. It was another 4 lengths back to Canela third, while favorite Honest Man faded to fourth.
Results Chart from DRF 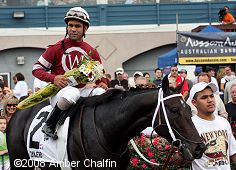 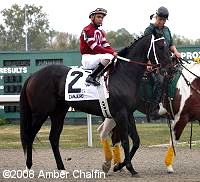 Left: Zanjero in the winner's circle. Winning owner Ron Winchell said, "The race went just as I hoped it would. He broke clean and was close to the pace. It looked like that's where you wanted to be all day. He has a good late kick as long as he doesn't use it too early. We'll talk things over with Steve (Asmussen, regarding the Breeders' Cup)." Asmussen later announced that Zanjero would enter the Breeders' Cup Dirt Mile. Jockey Shaun Bridgmohan added, "I was very confident at the top of the stretch. I got him settled behind the leaders and waited for a seam to open up, and once it did, it made my job a lot easier. He went on like a true professional." 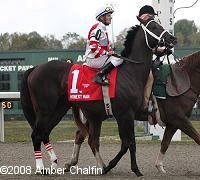 Fourth place finisher and beaten favorite Honest Man in the post parade. Honest Man led for the first 5 furlongs under Terry Thompson, was passed at the 3/8 pole, and gave way late finishing fourth. The Larry Jones trained son of Unbridled's Song has a record of 6 wins, 1 second, and 1 third in 11 starts, earning $378,200 for owners Winstar Farm and Fox Hill Farm. 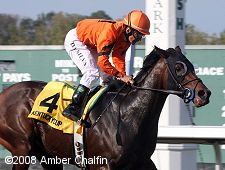 The distaff division was represented in the $100,000 Kentucky Cup Distaff Stakes (G3), formerly known as the Turfway Breeders' Cup, with a field of 7 older fillies and mares going 1 1/16 miles on the Polytrack. Woodbine invader Bear Now was sent off as the 6-5 choice over 4-1 Maren's Meadow. 7-1 Devil House was allowed an uncontested lead of as many as 3 1/2 lengths through fractions of 23.87, 47.19, and 1:11.31, while Bear Now sat in second the whole way. Turning for home, jockey Eurico Rosa da Silva asked Bear Now for run and got it, as the favorite easily ran by the pacesetter and drew off through the stretch to a convincing 4 length win over late-running 12-1 Unforgotten in 1:43.37. It was another 2 1/4 lengths back to pacesetter Devil House third.
Results Chart from DRF 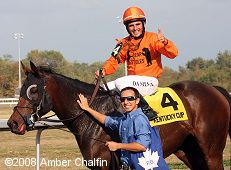 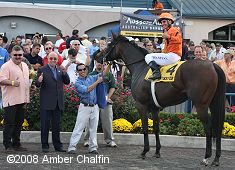 Left: Jockey Eurico Rosa da Silva celebrates his second Kentucky Cup race win of the day aboard Bear Now. He said, "I had the opportunity to work her two times. The first time she was very aggressive. I tried to get her to relax. The second work, I got to know her well and she went well and finished strong. I was very confident because she relaxed today. She was a little tight before going into the gate, but she's very professional. Today she understood what I was asking her and she did everything right. When you ride this kind of horse, it makes your job easy."

Right: Bear Now in the winner's circle. Winning trainer Reade Baker said, "I'm thrilled with the race. She rated easily. It was the first time she's done that in her life, which should bode well for California. Last year all she could do was go to the lead." 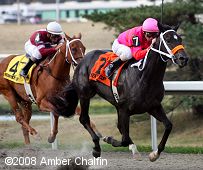 The $100,000 Kentucky Cup Juvenile (G3) has produced two Breeders' Cup Juvenile winners in the past. This year, West Side Bernie was sent off as the 9-5 choice in the field of 7. 4-1 fourth choice Proud Jefe battled for the lead with 7-2 third choice Retap through fractions of 23.81, 47.95, and 1:12.60 before Proud Jefe tired and faded out of contention. West Side Bernie, who stalked the pace three wide in 3rd, reeled in the leaders at the 3/8 pole and drew off late to win by 3 lengths over Retap in 1:44.22. It was another 3 lengths back to 7-1 Gresham third.
Results Chart from DRF 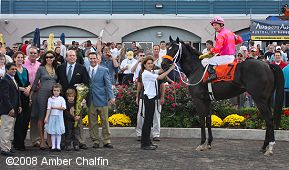 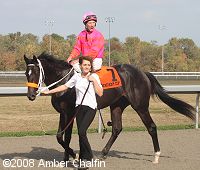 Left: West Side Bernie in the winner's circle. Winning trainer Kelly Breen said, "If all goes well, we'll make some phone calls and get to California. We had him here just as a backup plan (with Bold Union expected to do well). When I told George (Hall, the owner) that we were going to bring him here I think he thought I was crazy, but I told him I think the horse has a lot of talent. He likes the distance and he likes the surface, so I think we're going to go to the show (Breeders' Cup)." Jockey Stewart Elliott added, "He was running comfortable behind those horses around the turn. Then I asked him and he responded beautifully. It was the first time I was on him and I knew he ran a race routing, so that's a big edge, especially that he won doing it. The experience from this race being on the synthetic track should help him in California."

Right: West Side Bernie returns after the race. 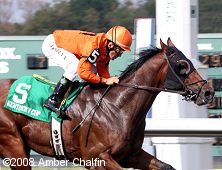 A field of nine older horses went to post in the $100,000 Kentucky Cup Sprint (G3) at 6 furlongs. Fatal Bullet was the 6-5 favorite over 5-2 Hatta Fort. Jockey Eurico Rosa da Silva sent Fatal Bullet to the lead soon after the start and he was joined by 6-1 Nautical Storm for the first quarter mile in a quick 21.71. Fatal Bullet shook him off and opened up a 1 1/2 length advantage after half a mile in 44.44 and never looked back. 15-1 Silver Sword took second at the top of the stretch but Fatal Bullet was long gone, drawing away to a 7 3/4 length win in a new track record time of 1:08.03. It was 1/2 a length back to 34-1 No Advantage third.
Results Chart from DRF 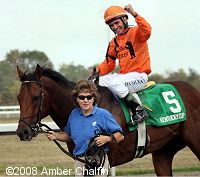 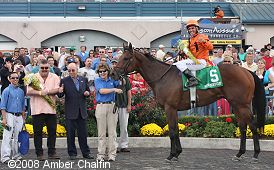 Left: Jockey Eurico Rosa Da Silva celebrates aboard Fatal Bullet. He said, "When I worked him for this race he did it so easy. I told Reade that he's coming into this race in top shape. I cantered him in the warm ups and he was very relaxed, just playing. He did everything in this race so easily. I'd go out to California with confidence in him."

Right: Fatal Bullet in the winner's circle. Winning trainer Reade Baker said, "I thought the competition at Presque Isle Downs (Tom Ridge Labor Day Stakes) may have been a little stiffer last time, but he sure ran fast today. When you're a little unsure of the circumstances that you're in, I guess the best place to be is on the lead so you can't get in any trouble. We'll be at Breeders' Cup next, God willing." The combination of owner Danny Dion's Bear Stables, trainer Reade Baker, and jockey Eurico Rosa da Silva won with both of their starters on Kentucky Cup Day, and will be sending both to the Breeders' Cup at Santa Anita. 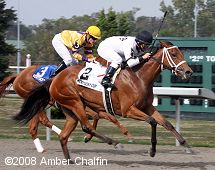 Kicking off the stakes action on Kentucky Cup Day was the $100,000 Kentucky Cup Juvenile Fillies for 2-year-old fillies at 1 mile. Bold Union was the 9-5 favorite over 5-2 Juliet's Spirit. Bold Union battled for the lead with 88-1 longest shot Saxxy Rose Lee through fractions of 23.56, 46.32, and 1:11.32. Bold Union tired from this battle allowing the longshot to open up a 1 1/2 length lead in midstretch, but the fast pace set the race up for the closers, as 7-2 third choice Sugar Mom, seventh at the half, came out wide into the stretch to get the lead at the 1/16 pole, holding off 5-1 Complicity in the final yards to get the win by a length in 1:37.86. It was 2 3/4 lengths back to Saxxy Rose Lee third.
Results Chart from Equibase 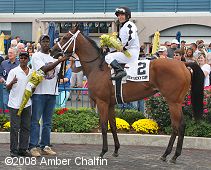 Sugar Mom in the winner's circle. Winning trainer Wayne Catalano said, "We thought with the speed the race would set up good for her. She had a great post position. It looked like on paper that the speed would start backing up at the quarter-pole and then we'd start getting into the race around the same time. That's exactly how it worked out. Any time you have a horse good enough to be considered for the Breeders' Cup, you have to think about it. We'll talk it over with Mr. (Frank, owner) Calabrese and see what the filly tells us." Jockey Manny Aguilar added, "She runs well from behind, so that's where I put her. She's definitely a distance horse that can get more ground. This is my first time here and it's nice to win this race." 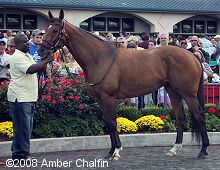 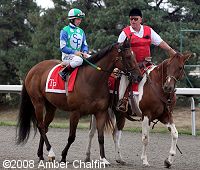 9-year-old gelding Perfect Drift had his official retirement ceremony on Kentucky Cup day and lead the post parade for the Classic with retired jockey Pat Day aboard. Perfect Drift had a total of 50 starts in his eight year career with 11 wins, 14 seconds, and 7 thirds and $4,714,213 in earnings. He broke his maiden at Turfway Park and won both the Lane's End (Spiral) Stakes and the Kentucky Cup Classic. He also ran in five consecutive Breeders' Cup Classics, finishing 3rd in 2005.

Perfect Drift was bred and campaigned throughout his career by Stonecrest Farm, the breeding and racing operation of Dr. William A. Reed. Dr. Reed said, "He established his reputation and fan base at Turfway Park, so it seemed appropriate that he would return to his racing home for his retirement." Perfect Drift was led to the paddock by and posed in the winner's circle with his longtime groom Richard Anderson.