The Kentucky Cup Day of Champions is the signature event of Turfway Park's fall meeting, with five races which potentially could be used as Breeders' Cup preps. With wet weather, full fields, and several horses making their first starts over the Polytrack, longshots were the order of the day as none of the favorites made it to the winner's circle, and amazingly the lowest-odds horse to win was a 12-1 shot! Thanks to photographer Amber Chalfin for these photos.

The highlight race of the day was he $350,000 Kentucky Cup Classic (G2), a 1 1/8 mile trip over the Polytrack for older horses. This featured a compact field of just six, with Woodward winner Premium Tap sent off as the 11-10 favorite over 2-1 second choice Perfect Drift, fourth in the Pacific Classic last out.

13-1 shot Ball Four battled on the front end with 7-1 Greeley's Galaxy through easy fractions of 23.79, 47.51, and 1:11.59 while Premium Tap sat in mid pack in stalking position and Perfect Drift sat near the back of the pack. Entering the stretch, Greeley's Galaxy faded from contention allowing Ball Four to stretch his lead to 1 1/2 length with a furlong to go. Perfect Drift put in a strong late run through traffic but was left with too much to do as Ball Four held him off in the final strides to win by 1/2 a length in 1:48.29. It was 3/4 length back to 4-1 Good Reward in third.
Results Chart from DRF

Winning trainer Patrick Biancone said, "He worked extremely well this week and we knew he loved Polytrack. There were only six horses entered so we decided to take a shot and see if we could win." Jockey Willie Martinez added, "Obviously the plan was to put him on the lead. I was able to control the pace, and once I got him comfortable, I knew he would be very tough to beat." 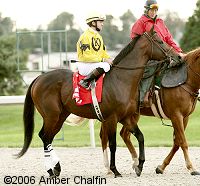 Beaten favorite and fifth place finisher Premium Tap in the post parade. His trainer John Kimmel said, "It looked to me like he was through [the hole], but I want to look at the video again. It's amazing he even got back in the race. He looked OK physically when he came back. I couldn't see anything obviously wrong." Jockey Kent Desormeaux added, "I was all the way inside of Ball Four and the door closed on me. So my horse clipped heels and almost fell. Then he reengaged and came on again." 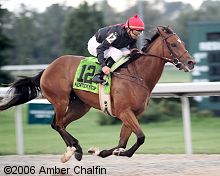 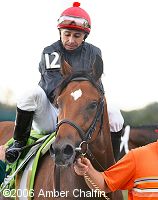 Jockey Mike Smith and U D Ghetto return after the race. Winning trainer Anthony Reinstedler said, "This horse is a handful all the time. At any given moment he's liable to rear up or flip over, but he can run. The Breeders' Cup (Juvenile) will be (owner) Michael Mackin's decision, but he's from Louisville so I have a feeling we'll be going." 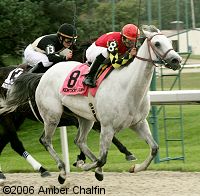 The distaff division was represented in the $175,000 Turfway Breeders' Cup Stakes (G3) at 1 1/16 miles. Splendid Blended was sent off as the 7-5 favorite over 7-2 Prospective Saint. 7-1 Slew Peg made all the running early, pulling away to a clear lead entering the backstretch through fractions of 23.06, 46.23, and 1:10.63 while being stalked by Prospective Saint. Slew Peg still had the lead in mid-stretch, but 16-1 Beautiful bets, who raced three-wide out of trouble in sixth early, came out five wide in the stretch and wore down the leaders in the final 1/16 to prevail by a neck in 1:42.79. 4-1 La Reason rallied well to get up for second by 3/4 length over pacesetter Slew Peg. Splendid Blended stalked the pace in third the whole way but flattened out in the stretch finishing fourth.
Results Chart from DRF 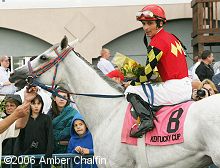 Beautiful Bets in the winner's circle. Her trainer Glenn Wismer said, "She seemed to handle the Polytrack well [at Woodbine in her last race]. She's got a big heart. She's unbelievable. She's a good shipper and likes to travel. I've only had her for a little over a year. He [owner Gregory Szymski] she would handle the distance, so I had no problem with that." Jockey Willie Martinez added, "I've ridden her before and she is a different horse now. She is much more mature and settled. She's just been facing some really good horses and couldn't get there, but today I got her relaxed and we found a clear path in the stretch to run. I now she has a good 3/16 of a mile run and I just had to wait for the right moment. She's very game." 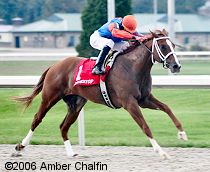 The $100,000 Kentucky Cup Juvenile Fillies featured 2-year-old fillies going 1 mile on the Polytrack. Whatdreamsrmadeof was the 5-2 favorite over 3-1 Kauai Calls. 12-1 Cohiba Miss went to the front right away and set a pace of 23.14, 46.30, and 1:10.78 while being stalked by 13-1 Expertise. Entering the lane, jockey Willie Martinez asked Cohiba Miss for her run and got it, as she powered away through the stretch to win by 3 1/4 lengths in 1:36.68, easily holding off the late closing Whatdreamsrmadeof. It was a length back to Expertise in third, while Kauai Calls stopped badly late and finished last.
Results Chart from Equibase 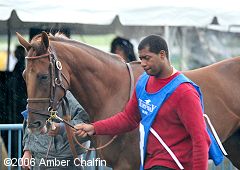 Second place finisher and beaten favorite Whatdreamsmadeof in the paddock before the race. Her trainer Thomas Amoss said, "I thought she ran a very good race. She showed that she could get two turns and she successfully made the sprint-to-route transition. She didn't get out as early as we might have liked, but I think the race was over at that point. She made up good ground but I don't think we were catching the winner. To evaluate what her next start would be is premature at this point." Jockey Calvin Borel added, "She broke a little flat-footed and then had some trouble in the first turn and again in the second turn, but I think she'll come around and be a real nice filly." 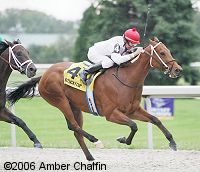 A full field of twelve made the gate in the $100,000 Kentucky Cup Sprint (G3), a 6 furlong dash for older horse. Likely was sent off as the lukewarm 2-1 favorite over 3-1 Island Warrior. 48-1 outsider Chief What It Is and 9-1 Four Sevens battled on the pace down the backstretch through a quick first quarter in 21.85. Four Sevens led the field into the stretch after a half in 44.85, but 26-1 shot Reigning Court was moving well from a stalking third position and took over the lead at the 3/16 pole. He easily held off the late rally of Island Warrior to win by 1/2 a length in 1:09.13. It was a long 3 lengths back to 13-1 Hallowed Flag in third, while favorite Likely disappointed in sixth.

Winning trainer Scott Blasi said, "He's a horse with an enormous amount of talent. We purchased him privately on behalf of the owners. He was his own worst enemy this winter in Florida. He had a lot of problems shipping from Palm Meadows to Gulfstream. He really turned the corner in Chicago." Jockey Corey Lanerie added, "He broke really sharp and was really on his game. Scott Blasi really had him ready to run well. I was just a passenger for this race. Reigning Court put me in a great spot and at the quarter pole I took a peek back and at the eighth pole I got into him and I'm glad I did because Island Warrior was coming. I'm glad I got into him also, because you can't hear horses coming on Polytrack as much as you can on dirt."
Results Chart from DRF