The feature race on Sunday at Woodbine was the $175,000 King Edward Stakes (G2), a 1 mile trip for older horses going around 1 turn of the E.P. Taylor turf course and is the major local prep for the Woodbine Mile (G1) on September 18 and ultimately the Breeders' Cup Mile. Conditions were excellent with sunny skies with a temperature of 23 C (73 F), and the course going firm (GoingStick 11.4). A field of 8 older horses went to post with March to the Arch sent off as the 7-5 favorite off his win in the Niagara Stakes after finishing second in the Dominion Day (G3). In to challenge him included 4-1 second choice and 5-year-old mare Jolie Olimpica, winner of the Nassau (G2) after finishing second in the San Simeon (G3) at Santa Anita, and 9-2 third choice Town Cruise, making his stakes debut off a 2 race win streak in allowance company.

Jockey Daisuke Fukumoto sent Town Cruise to the lead down the backstretch through fractions of 23.33, 45.75, and 1:08.12 while pressed by 19-1 Gray's Fable and stalked by Jolie Olimpica. In the stretch, Town Cruise continued to lead through 7f in 1:19.71 but 7-1 Olympic Runner, 5th early under Rafael Hernandez, came out for room after saving ground on the turn, rallying to take over the lead at the 1/16 pole and drawing clear late to win by 1 1/4 lengths in a new course record time of 1:31.73, shaving 2/100 second off the previous record set by Wise Dan in the 2013 Woodbine Mile (G1). It was another head back to late-running favorite March to the Arch third. 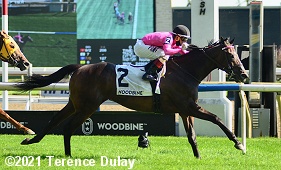 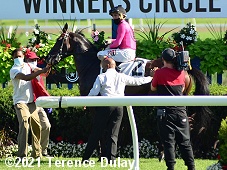 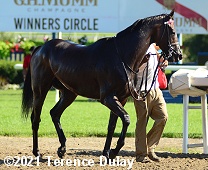 Left: Olympic Runner in the winner's circle. Winning jockey Rafael Hernandez said, "It was a good trip; we got lucky. Last time [when 2nd in the Connaught Cup (G2)], it was hard trip. We had nowhere to go. Finally at the sixteenth, we found a way to go, and it was too late. (This race) was longer. We got a long stretch. That helped a lot."

Right: Olympic Runner heads back to the barn after the race. 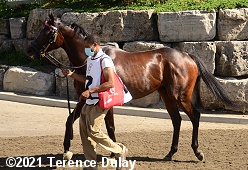 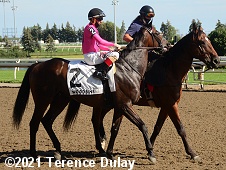 Left: Olympic Runner walks over before the race. Hernandez added, "We broke out of the gate and I try to get into the best position for the horse, give him the best trip you can. The rest is on him. We turned for home and he kept trying, he never gave up." 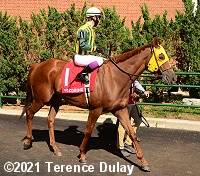 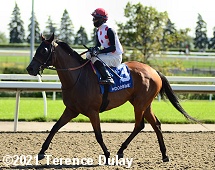 Left: Second place finisher Town Cruise heads out of the paddock before the race. He improved his record to 5 wins, 2 seconds, and 1 third in 13 starts, earning $225,926 for owner-trainer and breeder Brandon Greer.

Right: Third place finisher and beaten favorite March to the Arch returns after the race. The Mark Casse trainee improved his record to 8 wins, 4 seconds, and 4 thirds in 28 starts, earning $935,642 for owner-breeder Live Oak Plantation.