Kentucky Downs in Franklin, just north of the Tennessee border on Interstate 65, is unique among North American racetracks in that it exclusively races over turf, a 1 3/8 mile irregularly shaped oval. With its Mint Gaming casino funding the purses for a very short fall meeting, the track pays out the highest average daily purses of any track on the continent. The second Saturday in September is the highlight of the meeting, with two $1 million events, both part of the Breeders' Cup Challenge "Win and You're In" series. Conditions were excellent with partly cloudy skies, temperatures in the mid 80's, and the turf rated firm.

The feature race on Saturday was the $1 million Calumet Turf Cup (G2) for older horses going 1 1/2 miles looking for automatic entry into the Breeders' Cup Turf. Last year's winner Arklow was sent off as the 2-1 favorite in the field of 12 off a 7th place finish in the Del Mar Handicap (G2). In to challenge him included 7-2 second choice Channel Cat, 4th in the Bowling Green (G2) at Saratoga, and 6-1 third choice Glynn County, 3rd in the Mr. D Stakes (G1) at Arlington. 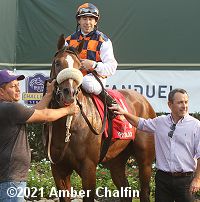 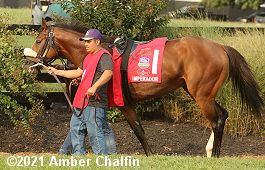 Left: Imperador in the winner's circle. Winning jockey Joe Talamo said, "He showed a good turn of foot. (Arklow) was coming pretty quick, but hats off to my horse, he did it all."

Right: Imperador in the paddock before the race. Winning trainer Paulo Lobo said, "I was expecting a huge effort, Lobo said. "He ran good at Churchill, the first time running a mile and a half here in America. He ran very good in New Jersey and he was doing very good for this race. In the Breeders' Cup we are going to be in deeper waters, but this horse I think is peaking at the right time. I think he is going to enjoy Del Mar. South American horses also like Del Mar."

The $1 million FanDuel Turf Sprint Stakes (G3) is a Breeders' Cup Challenge race in the Turf Sprint division. Got Stormy was sent off as the 7-2 favorite in the field of 12 off his win in the Fourstardave (G1) at Saratoga. In to challenge him included 9-2 second choice Fast Boat, second in the Troy (G3), and 5-1 third choice Casa Creed, third in the Fourstardave after winning the Jaipur (G1).

Jockey Flavien Prat sent 6-1 Bombard to the lead through fractions of 22.38 and 45.14 while pressed by 11-2 fourth choice Gear Jockey and stalked by 22-1 Diamond Oops. Turning for home, Gear Jockey came out 3 wide to take over the lead at the 3/16. Kept to task by Jose Lezcano, Gear Jockey drew off to win by 2 1/2 lengths over Diamond Oops in a new course record 1:07.90, 1.25 seconds faster than the previous record. It was a nose back to pacesetter Bombard third, while favorite Got Stormy was 9th early and failed to rally finishing 6th beaten 3 1/4 lengths. 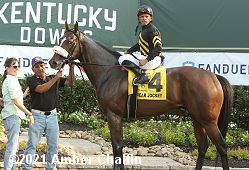 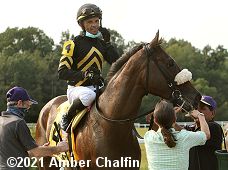 Left: Gear Jockey in the winner's circle. Winning jockey Jose Lezcano said, "He broke right on top and I let him follow (Bombard) and when I asked him at the three-sixteenths he took off again. At the quarter (pole) he had already taken me there, but at three-sixteenths I had to ask him because no one was coming and he might hang and fool around. The whole way he gave me the feeling that I had so much horse. When I asked him he really kicked on."

Right: Gear Jockey returns after the race. Winning trainer Rusty Arnold said, "He wasn't finishing his races like the way he was training for them. So I had a talk with (Calumet Farm general manager) Eddie Kane, and we decided to sprint him and let's see what happens. Things went the right way for him today. It was a huge effort. I'm proud of the way he showed up and today was the right day to show up. Sometimes these things work out and sometimes they don't. This time it did." 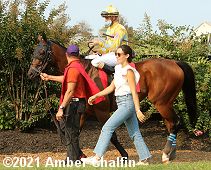 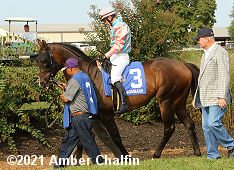 Left: Second place finisher Diamond Oops in the paddock before the race. He improved his record to 8 wins, 4 seconds, and 2 thirds in 22 starts, earning $1,362,340 for owner-trainer Patrick Biancone and co-owners Diamond 100 Racing Club, Amy Dunne, and D.P. Racing.

Right: Third place finisher Bombard in the paddock before the race. The Richard Mandella trainee improved his record to 6 wins, 6 seconds, and 3 thirds in 19 starts, earning $552,771 for owner-breeder Raydelz Stable. 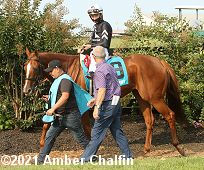 Sixth place finisher and beaten favorite Got Stormy in the paddock. Trainer Mark Casse said, "Tyler said she traveled great. Just, they were rolling. You've always heard me say that she likes hard ground. I think when she's sprinting she probably would actually like it a little softer. Today they were just a little too fast for her. But she's fine. We knew this was a tall task but this will get us ready for the Breeders' Cup (Mile). And so everything for us was timing and getting a good race into her. I just felt like, the First Lady was 1 1/16 miles, she can't do that. This was really the race and I knew that it would be a tall task. But I'm proud of her." 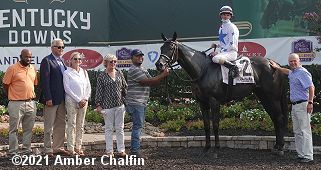 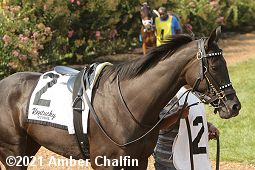 Left: Princess Grace in the winner's circle. Winning jockey Florent Geroux said, "The hole opened up, but sometimes the horse might not be fast enough to take advantage of it. But she put us where we needed to be."

Right: Princess Grace in the paddock before the race. Winning trainer Mike Stidham said, "With the kind of horse she is, you worry but you're not as worried" after trailing the field early. She may go next in the First Lady (G1) at Keeneland. 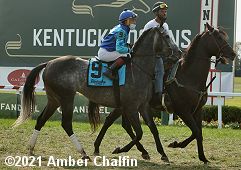 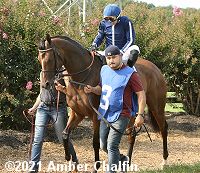 Right: Third place finisher Abscond in the paddock before the race. The Eddie Kenneally traine improved her record to 2 wins, 4 seconds, and 3 thirds in 12 starts, earning $365,781 for owner Apogee Racing.

Venetian Harbor was quickest away through an opening quarter of 22.33 before 68-1 Lagertha took over on the turn through a half in 45.88 while stalked by 15-1 In Good Spirits. Lagertha led to midstretch through 3/4 in 1:09.15 but In Good Spirits and jockey John Velazquez ralled on the inside to win by 2 lengths over late-running Catch a Bid in 1:15.35. It was another 1/2 length back to Lagertha third, while favorite Venetian Harbor tired late to finish 10th beaten 13 1/4 lengths. 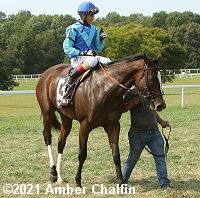 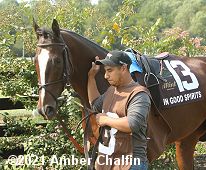 Left: In Good Spirits heads to the winner's circle. Winning jockey John Velazquez, celebrating his first win at Kentucky Downs said, "Anytime you win a race, it's doesn't matter where it is. A win is a win. She scared me a little bit today because she was a little too close. I didn't want to be that close. She broke so good, I had to wrestle her back a little bit to get her off the horses. Then she settled well. From the quarter pole, I saw (Hector Berrios on Lagertha) trying to get away a little sooner. I decided to let him go and hopefully I can get him coming down the lane. That's the way it worked out."

Right: In Good Spirits in the paddock. Winning trainer Al Stall Jr. said, "She's got a little bit more of a punch than she did going two turns. She's got some class. She's a fresh horse. We're looking forward to her 5-year-old year." 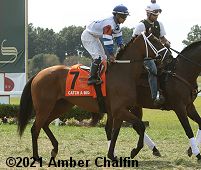 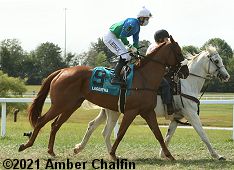 Closing out the Saturday graded stakes quintet was the $600,000 Franklin-Simpson Stakes (G2) for three-year-olds sprinting 6 1/2 furlongs. Bruce D Stakes (G1) winner Point Me By was sent off as the 2-1 favorite in the field of 11 over 5-1 second choice Next, 4th in the Hall of Fame Stakes (G2) at Saratoga, and 11-2 third choice County Final, second in the Greenwood Stakes at Woodbine. 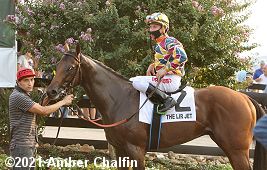 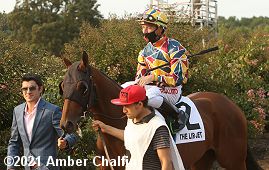 Left: The Lir Jet in the winner's circle. Winning trainer Brendan Walsh said, "I hadn't had him a very long time, but he came to me in very good shape, made my job very easy. We just took him over when he got off the plane, and here we are. I thought he was very impressive. It looked like he was always in control, got a great ride. It worked out great. Third year in a row for (owner Sheikh Fahad). It's great to have him here. He's a great supporter of ours, and it's nice that he could come over and see the unique Kentucky Downs that it is."

Right: The Lir Jet in the paddock. Winning owner Sheikh Fahad Al Thani, celebrating three straight Franklin-Simpson wins said, "From the first year we won, I told Fergus (Galvin, Qatar Racing's U.S. racing manager) that we wanted to go again. And this year we figured out that this horse was ideal for this race. Tyler gave him an unbelievable ride. The one thing I asked Oisin Murphy, who rides him in England, and he said just make sure he's sitting third, fourth, and that he has something to aim at. He thought he was better than the (others) here, and he showed that today." 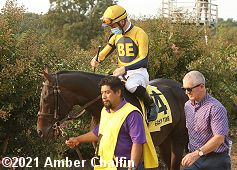 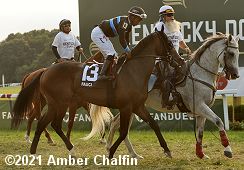