With just 3 weeks remaining in the Woodbine Thoroughbred season and turf racing already ended, there are few stakes opportunities left to convince the Sovereign Award voters, as many of the top stables have begun to ship south for the winter. However, with the City of Toronto ordered by the Province of Ontario to go into COVID-19 lockdown effective Monday, this could well be closing weekend, but at time of writing this was not confirmed. Conditions on Saturday were typical for late November at the Toronto oval, with overcast skies, a light wind, and a race time temperaure of 5 C (41 F).

The $175,000 Kennedy Road Stakes (G2) featured some of the top older male sprinters in Canada going 6 furlongs on Tapeta. As expected last year's winner Pink Lloyd was sent off as the even-money choice in the field of 7, winner of 5 straight including the Vigil (G3) last out. In to challenge him included 5-2 second choice Ride a Comet, an allowance winner last out after a 2-year layoff, and 4-1 third choice Silent Poet, winner of the Nearctic (G2).

Jockey Justin Stein sent Silent Poet to the lead out of the chute through fractions of 22.77 and 44.79 while pressed by 60-1 longest shot Eskiminzin and stalked by 19-2 Souper Stonehenge. Turning for home, Ride a Comet, last early under Patrick Husbands, swept to the front through 5f in 56.56. Kept to task by Husbands, Ride a Comet drew off to win by 1 1/4 lengths over Souper Stonehenge in 1:08.25, just 1/5 second off Pink Lloyd's track record. It was another 2 lengths back to favorite Pink Lloyd third. 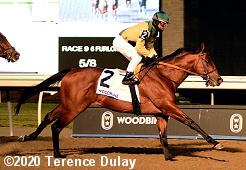 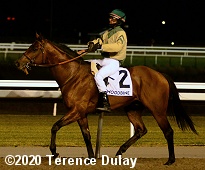 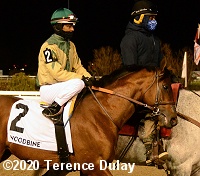 Left: Ride a Comet returns after the race. Winning jockey Patrick Husbands said, "He went a good race, he showed he's all class. The last time I rode him, it was the first time we sprint and his first time in two years going 7/8. And he broke sharp, you know, and I eased him back because it was his first time in a long time so after the race I said to Mark (Casse, trainer), 'He left there running and I eased him back.' He said 'Alright, we're going against Pink Lloyd next start.'" 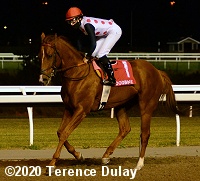 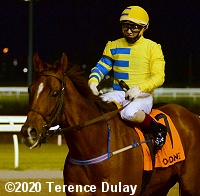 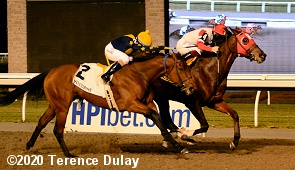 The $175,000 Bessarabian Stakes (G2) is the distaff counterpart to the Kennedy Road, featuring older fillies and mares sprinting 7 furlongs. Artie's Princess was sent off as the 5-2 favorite in the field of 7 off her win in the Ruling Angel Stakes. In to challenge her included 7-2 second choice Amalfi Coast, winner of the Sweet Briar Too, and 4-1 third choice Boardroom, winner of the Duchess Stakes.

Jockey Daisuke Fukumoto sent 9-1 Jakarta to the lead out of the chute through fractions of 22.31 and 44.41 while pressed by 7-1 Souper Escape and stalked by Artie's Princess. Turning for home, jockey Kazushi Kimura sent Artie's Princess to the lead and she opened up a 2 length lead through 3/4 in 1:08.63. Boardroom, last early, put in a strong late rally but Artie's Princess held her off by a head in 1:20.90, just 0.83 seconds off the track record. It was another 3 1/2 lengths back to 13-2 fourth choice Our Secret Agent third. 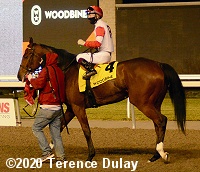 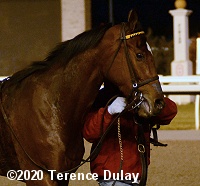 Right: Artie's Princess heads back to the barn after the race. Kimura added, "I felt (jockey Luis Contreras and Boardroom coming) but she wasn't that tired and kept going. I felt I could win." 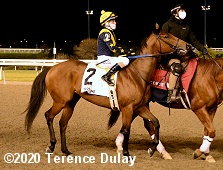 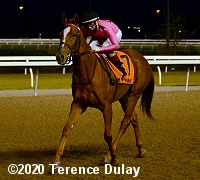 Right: Third place finisher Our Secret Agent returns after the race. The Mark Casse trainee improved her record to 2 wins, 4 seconds, and 3 thirds in 9 starts, earning $137,338 for owner Gary Barber. 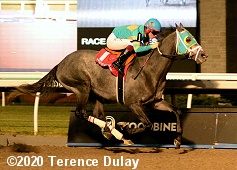 The $125,000 Ontario Derby (G3) featured a field of eight 3-year-olds going 1 1/8 miles. Queen's Plate and Prince of Wales Stakes winner Mighty Heart was sent off as the 9-5 favorite off his disappointing 7th place finish in the Breeders Stakes. In to challenge him included 11-4 second choice Field Pass, 3rd in both the American Turf (G2) and Twilight Derby (G2), and 9-2 third choice Belichick, 2nd in the Queen's Plate before winning the Breeders Stakes.

Jockey Rafael Hernandez sent Mighty Heart to the lead first time by and he set fractions of 24.30, 47.92, and 1:11.51 while pressed by 11-2 fourth chice Malibu Mambo and stalked by Field Pass. Turning for home, Mighty Heart tired as Mighty Mambo inherited the lead through 1 mile in 1:36.07. Field Pass, third early under Kazushi Kimura, passed the tiring pacesetters to win by 1 length over late-running Belichick in 1:48.35, just 0.11 second off the track record. It was another 1/2 length to Malibu Mambo third, and 2 1/2 more to favorite Mighty Heart fourth. 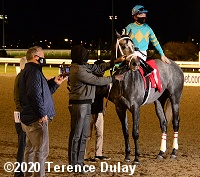 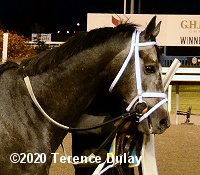 Left: Field Pass in the winner's circle. Winning jockey Kazushi Kimura said, "My planning was that I didn't want to get too forward, but I didn't want to send him to the front. That was the perfect position, just waiting for room."

Right: Field Pass returns to the barn after the race. Kimura added, “Such a classy horse. I've watched him many times, winning replays. He's nice, a nice horse." 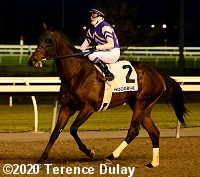 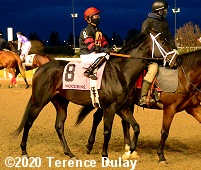 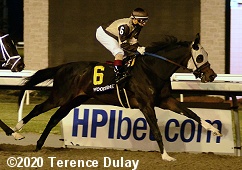 Right: The horses break from the gate for the Ontario Derby. 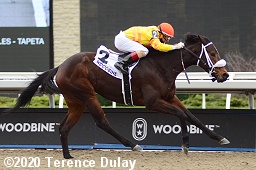 Jockey David Moran sent 31-1 Justleaveitalone to the led first time by and she set fractions of 24.91 and 48.68 while pressed by 13-2 fourth choice Avie's Samurai and stalked by Merveilleux. On the far turn Avie's Samurai gained the lead through 3/4 in 1:12.61. In the stretch, Merveilleux rallied by to gain the lead through 1 mile in 1:37.70. Kept to task by Rafael Hernandez, Merveilleux drew off late to win by 3 1/4 lengths in 1:44.37. It was a neck back to Afleet Katherine third, while Curlin's Voyage was 5th and wide throughout and tired late, finishing 5th beaten 7 lengths. 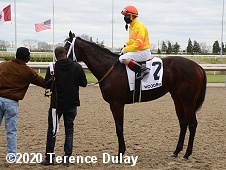 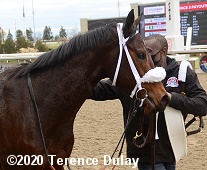 Left: Merveilleux returns after the race. Winning jockey Rafael Hernandez said, "I just wanted to make sure to get the right move, at the right time. I didn't want to get it too early and then flatten out in the lane, but everything worked good in the whole race. We sat behind the speed horse, relaxed good and everything worked perfect today."

Right: Merveilleux heads back to the barn. Winning trainer Kevin Attard said by videoconerence, "She was kind of misfortunate earlier in the year to have some rough trips and some bad racing luck, but she's really put it together lately and I'm just happy to see it for the owners. The championship is not based on one or two months of the year, it's over the season, and she's obviously gotten better as the season's gone on and she's at the top of the division right now. We're just happy that she's progressed like we wanted her to and hopefully she turns out to be a nice four-year-old." 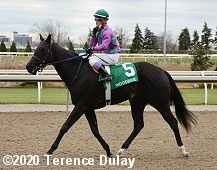 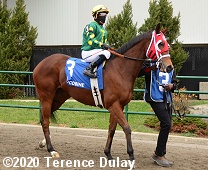 Right: Third place finisher Afleet Katherine heads out to the track before the race. The Kevin Attard trainee improved her record to 2 wins, 2 seconds, and 1 third in 6 starts, earning $208,345 for owner-breeder Terra Racing Stable. 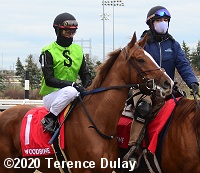 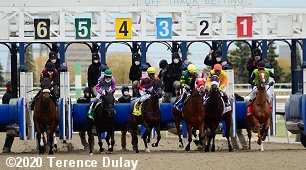 Right: The horses break from the gate for the Ontario Damsel