The feature race on Saturday at Santa Anita was the $100,000 Senator Ken Maddy Stakes (G3) for older fillies and mares sprinting 5 1/2 furlongs on the turf. Conditions were typical for late October with cloudy skies, temperatures in the low 70's and the course rated firm. Afer 1 scratch, Magic at Midnight was sent off as the 4-5 favorite in the field of 6, undefeated in 4 starts in allowance company and making her stakes debut here. In to challenge her included 7-2 second choice Jo Jo Air, 6th in The Very One Stakes at Pimlico after winning the Daisycutter Handicap at Del Mar, and 6-1 third choice Aqua Seaform Shame, second in the Unzip Me Stakes after finishing last of 10 in the Del Mar Oaks (G1).

Jockey Juan Hernandez sent 9-1 Biddy Duke to a clear lead down the backstretch through fractions of 21.80 and 44.60 over firm going while pressed by Jo Jo Air and stalked by 10-1 An Eddie Surprise. Turning for home, Jo Jo Air attemped to close through 5f in 56.09 but Biddy Duke held her off to win by a head in 1:02.03.It was another length back to An Eddie Surprise third, while favorite Magic at Midnight trailed the whole way to finish 5th beaten 2 3/4 lengths. 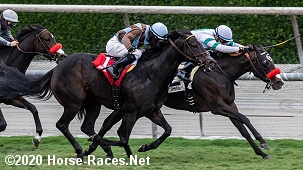 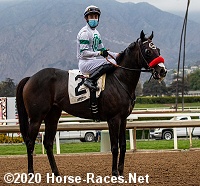 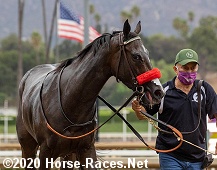 Left: Biddy Duke in the winner's circle. Leandro Mora, assistant to winning trainer Doug O'Neill said, "This filly has been so honest ever since we got her. The idea was just to not go to the lead, just go close to the lead so we can have a path for the other ones. Juan (Hernandez) said she never quit, when he asked her, she just came back and that's all you see. We just pray and do the best (we) can."

Right: Biddy Duke heads back to the barn after the race. 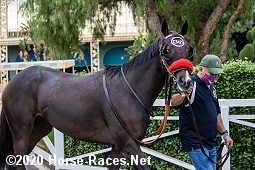 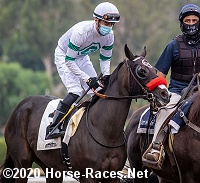 Left: Biddy Duke in the paddock. Winning jockey Juan Hernandez said, "She's really fast and she's one of the smallest horses I've ever ridden. I knew we were going fast, but she was comfortable, so I let her go. When she saw that other filly come to us, she really fought back. She's small but she's got a big heart." 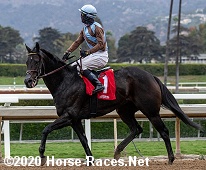 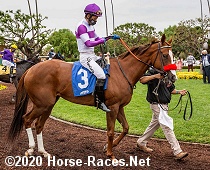 Right: Third place finisher An Eddie Surprise in the paddock. The Doug O'Neill trainee improved her record to 5 wins, 9 seconds, and 5 thirds in 27 starts, earning $353,952 for owner-breeder Reddam Racing. 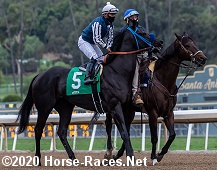 Fifth place finisher and beaten favorite Magic at Midnight in the post parade. The Mark Glatt trainee has a record of 4 wins, 0 seconds, and 0 thirds in 5 starts, earning $102,200 for owners Michael A. Moran, Michael J. Moran, and Joseph Moran.