There were three stakes races originally scheduled for the turf on Sunday at Belmont Park, but thanks to the heavy rains that soaked the racing surfaces all day Saturday, the turf events were moved to the main track, resulting in each race being downgraded by the Graded Stakes Committee pending review, and both Breeders' Cup Challenge races losing their automatic entry provision since they were prep races for turf events. The 4,562 spectators on hand enjoyed much better weather, with clear skies and the temperature around 70 degrees.

The first stakes race on the day was the $250,000 Kelso Handicap (G3, downgraded from G2 after coming off the turf) for older horses going 1 mile on the muddy, sealed main track. Originally five made final entry but with two scratches, only three went to the gate, with Ready's Echo sent off as the 3-5 favorite exiting a close third place finish in the Forego last out. Le Grand Cru, fourth in an allowance last out, was the 5-4 second choice over 6-1 Yield Bogey exiting a fourth place effort in an allowance. Due to the short field, only win wagering was offered. 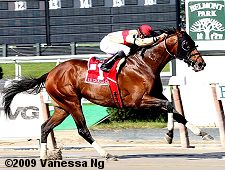 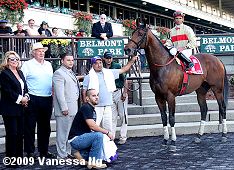 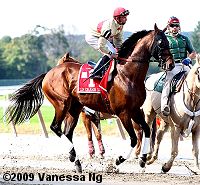 Left: Le Grand Cru in the winner's circle with trainer Allen Jerkens on the left in the white hat. Jerkens said, "They take the grading away when it comes off the turf, but the money's good. I thought the second horse (Ready's Echo) would be very tough, but we were able to outgun him. We'll take it." 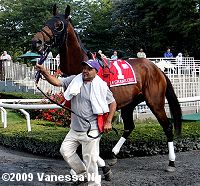 Le Grand Cru in the paddock before the race. His jockey Jose Lezcano said, "It was an easy trip in a three-horse race. He broke sharp...and I thought the outside was better. When I asked him, he gave me everything he had." 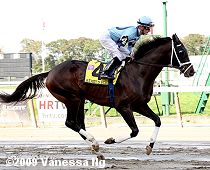 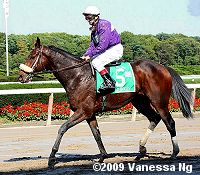 Left: Second place finisher and beaten favorite Ready's Echo in the post parade. The 3-5 favorite broke slowly and trailed early under Julien Leparoux, came out 4 wide into the lane but was no match for the winner. The Todd Pletcher trainee improved his record to 2 wins, 4 seconds, and 4 thirds in 13 starts, earning $337,988 for owner Let's Go Stable. 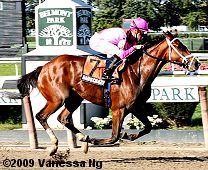 The $150,000 Miss Grillo Stakes (downgraded from G3 after coming off the turf) featured 2-year-old fillies going 1 mile on the main track now upgraded to good. Nine originally were drawn but 6 scratched leaving just three in the gate. Tapitsfly, winner of 2 straight including the P.G. Johnson Stakes at Saratoga, was the 3-5 favorite over 8-5 second choice Fuzzy Britches, a main-track-only entrant off a 2nd place finish in the Sorority, and 4-1 Dad's Crazy, winless in three lifetime starts including a second place finish last out.

Fuzzy Britches opened up a 2 1/2 length lead exiting the chute through an opening quarter in 24.30 before Tapitsfly moved up along the inside to challenge. The pair dueled into the stretch through fractions of 48.70 and 1:14.42. Dad's Crazy, who sat back in third the whole way, came out wide into the lane and easily passed the frontrunners, drawing clear in the stretch to win by 3 1/4 lengths over Tapitsfly in 1:40.04 . It was just a neck back to Fuzzy Britches third. 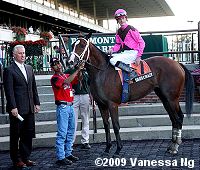 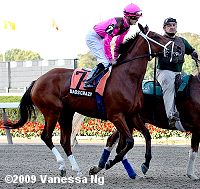 Left: Dad's Crazy in the winner's circle with trainer Todd Pletcher on the left. Pletcher said, "It was too good an opportunity to pass up when the field scratched down. She may be a better filly on turf but she had trained well on dirt. It worked out well. We'll look for something for her towards the end of the meet."

Right: Dad's Crazy in the post parade. Her jockey Julien Leparoux said, "Todd told me in the paddock that she's a difficult horse to get to relax, but she relaxed very well for me today and finished well. It was perfect sitting right behind the other two horses today. The main goal was to get her to relax and keep her covered up. I think she will run on anything." 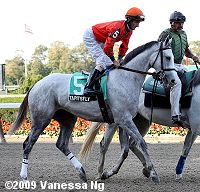 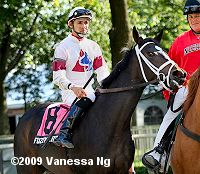 Left: Second place finisher and beaten favorite Tapitsfly in the post parade. The 3-5 favorite battled for the lead early under jockey Robby Albarado, but was no match for the winner, beaten 3 1/4 lengths. The Dale Romans trainee improved her record to 2 wins, 2 seconds, and 1 third in 5 starts, earning $128,142 for owner-breeder Frank L. Jones Jr.

Right: Third place finisher Fuzzy Britches in the paddock before the race. 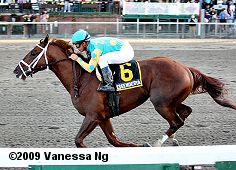 The $150,000 Pilgrim Stakes (downgraded from G3 after coming off the turf) featured 2-year-olds going 1 mile on the main track. Ten made final entry but with 5 scratches just 5 went to post on Sunday, with Western Flyer sent off as the 9-5 favorite off a maiden win, over 5-2 Eskendereya, second in his debut last out, and 3-1 Chairman Now, a main-track-only entrant winless in three starts.

9-1 longest shot Bricklayer dueled on the front end with Western Flyer down the backstretch through fractions of 23.85, 47.89, and 1:12.95 over the good track, with Chairman Now sitting a length behind in third. Entering the stretch, Bricklayer tired allowing Western Flyer to inherit the lead briefly, but Eskendereya, who was last early, came through between horses at the top of the lane and drew off to win by 7 1/4 lengths in 1:37.85. It was another 1 1/2 lengths back to Chairman Now third. 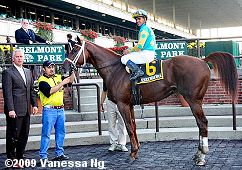 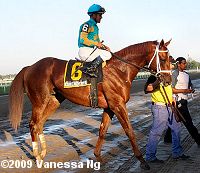 Left: Eskendereya in the winner's circle with trainer Todd Pletcher on the left. Pletcher said, "It was a very good effort. The horse had trained very well and we knew he was an improving horse. He got excluded from a maiden race, so we decided to take a shot in the stake and then when it came off we had a decision to make, but we felt like the horse had improved in his training recently on the dirt and felt like it was worth taking a shot. I was particularly pleased with the way he finished up and the way he galloped out, I'd say that he's typical of the Giant's Causeways and probably good on any surface. We'll talk to the owners about his next start; we have a lot of options."

Right: Eskendereya returns after the race. His jockey Javier Castellano said, "With the small field, Todd told me in the paddock to take my time. I had a perfect trip today. On the turn, when I saw the horses splitting, I asked my horse and he responded." 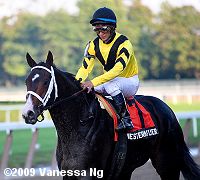 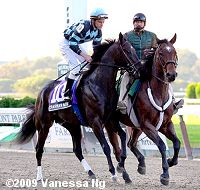 Left: Second place finisher and beaten favorite Western Flyer returns after the race. The 9-5 favorite pressed the pace from the outside for 5/8 mile, gained a short lead into the stretch but was no match for the winner. The Kiaran McLaughlin trainee improved his record to 1 win, 1 second, and 1 third in 3 starts, earning $58,480 for owner Cam Allard.