The highlight of the summer meeting at Saratoga Race Course is the Travers Stakes, billed as the Midsummer Derby. Before the graded stakes filled card on Saturday, Travers week kicked off with two rich listed stakes on Wednesday and Thursday. Conditions were typical for late August, with clear skies and temperatures in the mid 80's both days.


The feature race on Wednesday was the $120,000 John's Call Stakes, with a field of 7 older horses going 1 5/8 miles over the firm Mellon turf course. Bowling Green Stakes (G2) third place finisher Shamrocket was sent off as the 5-2 favorite over 7-2 second choice Serve the King, 4th in the United Nations (G1), and 9-2 third choice Ajourneytofreedom, 3rd in the Belmont Gold Cup (G2). 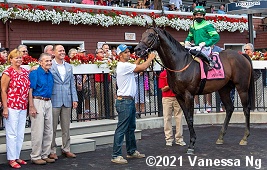 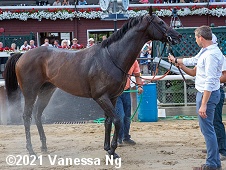 Left: Serve the King in the winner's circle. Winning trainer Chad Brown said, "We've been trying to get this horse around three turns since last year and we just didn't have the races available. He got started a little late last year and by the time we were really ready to start him, it was going to be in the Red Smith and he got injured so I had to stop on him. Mr. Brant [owner, Peter] has just been so patient, he always is with these horses and lets us give them the time and he came back really well this year."

Right: Serve the King gets hosed off after the race. Winning jockey Irad Ortiz Jr. said, I saved all the ground. I was outside and by the first turn I was already on the rail. He broke so good I was already in position right there. I saved as much ground as I could. I had to move a little early because they opened up a little bit on me but he was catching up, little by little. He's not the kind of horse that you're going to ask and he's going to respond right away. He takes some time, so I started moving a little early. When I hit him, he let me know that I had some horse, and when I tipped him out, he just went on from there." 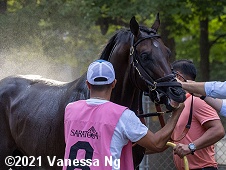 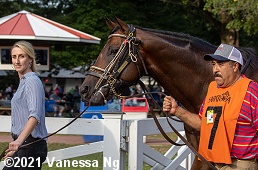 Left: Serve the King in the paddock before the race. Brown added, "I thought this horse should have been second in the United Nations. He got in some trouble around the eighth pole and we thought he should've been second. That went into my decision to bring him up here to Saratoga for a race of this caliber. Even though this isn't the Sword Dancer, it's still a real race at Saratoga. If I'm going to bring that horse all the way up here off a fourth on paper in the U.N., it better be a good fourth."

Right: Second place finisher Ry's the Guy enters the paddock. Jockey Luis Saez said, "We had a pretty nice trip. We broke from there and we had some pressure early. I guess that was the plan. I had to take a little hold. He went pretty quick, but he still ran big. I'm pretty happy with him. He was very tired but he tried hard." 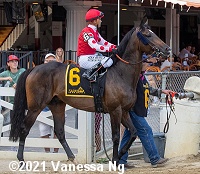 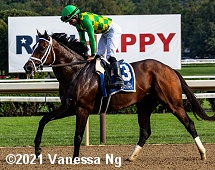 Left: Third place finisher Fantasioso heads out to the track before the race. He improved his record to 5 wins, 7 seconds, and 5 thirds in 28 starts, earning $170,472 for co-owner Bloom Racing Stable and co-owner/trainer Ignacio Correas IV.

Right: Fourth place finisher and beaten favorite Shamrocket returns after the race. The Todd Pletcher trainee has a record of 3 wins, 6 seconds, and 6 thirds in 18 starts, earning $345,380 for owner Donegal Racing.


On Thursday a field of 9 three-year-old fillies contested the $120,000 Riskaverse Stakes at 1 mile on the firm inner turf. Maiden winner Rastafara was sent off as the 2-1 favorite over 3-1 second choice Love and Money, 4th in allowance company last out, and 9-2 third choice Amy C, off her 6th place finish in the Lake George Stakes (G3). 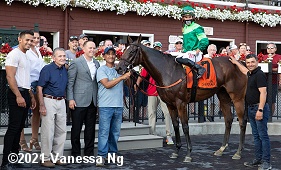 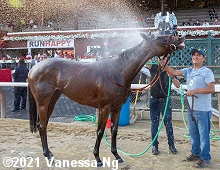 Left: Rastafara in the winner's circle. Winning trainer Chad Brown said, "My philosophy is that those horses who break their maiden at 3 - and we always thought they were amongst the top group in their crop - is to get them in a stake race right away while you can still run against your own age group. I think she's getting her experience now. She showed a good dimension today being a little more tactical. As long as she stays healthy, she has a very bright future ahead of her. She's always trained like a horse that we could take anywhere. I think she prefers firm ground and we saw that today."

Right: Rastafara enjoys the hose after the race. Winning jockey Irad Ortiz Jr. said, "Today, the race set up perfect for her. She did it the right way and she's moving forward. I like her. I let that [Love and Money] go way out in front and I was patient and waited. I just tracked [jockey Luis Saez] and followed him and tried to be close. I didn't want to get too far back or be too close without taking my horse out of her race, and she did great. I had a lot of horse under me. Every step of the race, she was moving great. When she started picking it up all on her own, I knew I was in a good position." 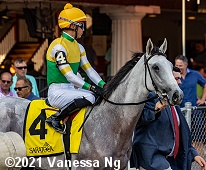 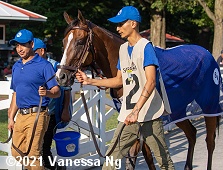 Left: Second place finisher Third Draft heads out to the track before the race. Jockey Jose Ortiz said,  "I really liked her race today. Going a flat mile she had tactical speed and put me there. She ran a very good race down the lane. I'm very happy with the distance and if she keep performing like this, she can win a stake at this distance or a little bit longer."