The feature race on New Year's Day at Santa Anita was the $250,000 Joe Hernandez Stakes (G2) for older horses sprinting 6 1/2 furlongs on the downhill turf. Conditions were excellent in Southern California with sunny skies and temperatures in the low 60's, however rain on Thursday downgraded the turf course to "good" while the main track dried back to "fast" in time for the card. Turf Monster Stakes (G3) runner-up Beer Can Man was sent off as the 11-10 favorite in the field of 7 off an allowance win at Del Mar. In to challenge him included 5-1 second choice Momos, second in a Churchill allowance after finishing 4th in the Nearctic (G2) at Woodbine, and 11-2 third choice Chewing Gum, third in both the Belmont Turf Sprint Invitational (G3) and Aqueduct Turf Sprint Championship. 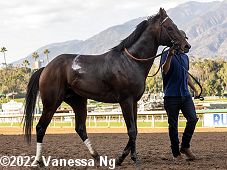 Left: Chewing Gum in the winner's circle. Winning jockey Umberto Rispoli said, "The top of the stretch was easy. I got a hold of the horse, once I put his head in front of Beer Can Man, the other horse fought really hard on the inside and he was actually waiting for him, but he gave me that feeling that we could go. Even after the wire he kept a head in front of him just to get the job done by a small margin."

Right: Chewing Gum heads back to the barn after the race. 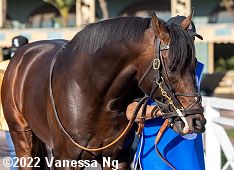 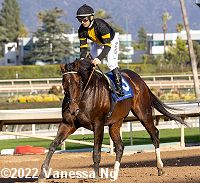 Left: Chewing Gum in the paddock before the race. Rispoli added, "He is the kind of horse that you have to kind of forget him the first part of the race and Mr. Mott gave me the instructions to be on the outside, and in the stretch I had that gap so I didn't want to lose that chance. For the first part he needs to find his legs and find his rhythm. I would say the ground really, really helped him, he really enjoyed that." 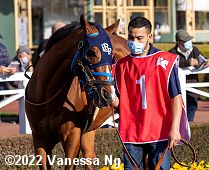 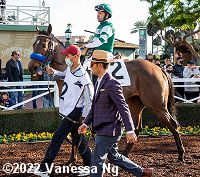 Left: Second place finisher and beaten favorite Beer Can Man in the paddock before the race. Jockey Flavien Prat said, "We got a good trip and he ran really great down the lane.  We just got unlucky at the end and just got beat."

A field of 5 three-year-olds contested the $100,000 Sham Stakes (G3) over 1 mile on the main track, worth 10 points to the winner under the Road to the Kentucky Derby. Nashua Stakes (G3) winner Rockefeller was sent off as the 3-2 favorite over 2-1 second choice Mackinnon, third in the Breeders' Cup Juvenile Turf (G1), and 5-2 third choice Newgrange off his debut win at Del Mar. 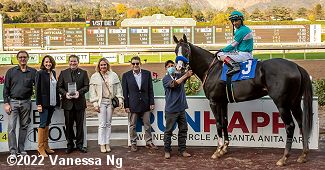 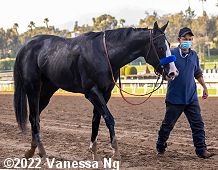 Left: Newgrange in the winner's circle. Winning trainer Bob Baffert, who trains the first 2 finishers said, "He looked good.  He had been training really well and working together with Rockefeller.  The quality is there.  I'm happy we have a great team and we are moving forward with him."

Right: Newgrange heads back to the barn after the race. Winning jockey John Velazquez said, "There was one speed (Rockefeller) and I'm pretty sure (Baffert) didn't want them in a head and head. He told me to put my horse on the lead. Once my horse got to the lead he waited. I took a little hold of him and he kind of started waiting for the horses, so I started waiting for the horses to come to him, by the time we got to the backside I kind of let him do his own thing. I let him get in a comfortable rhythm, after that it was pretty easy though. He's so green, he feels like he got on by himself, he was waiting for horses so, I had to give him a little reminder to keep his mind on running and his gallop out was pretty good so it still seems like he's learning." 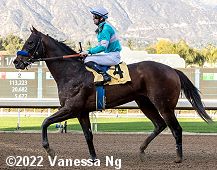 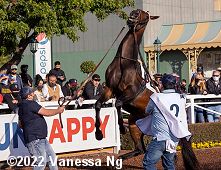 Left: Second place finisher and beaten favorite Rockefeller returns after the race. Trainer Bob Baffert said, "I thought Rockefeller would be a little closer.  We'll have to figure things out on where the two go from here."

Right: Third place finisher Oviatt Class acts up in the paddock before the race. The Keith Desormeaux trainee improved his record to 1 win, 0 seconds, and 3 thirds in 6 starts, earning $149,620 for owner James Downey. 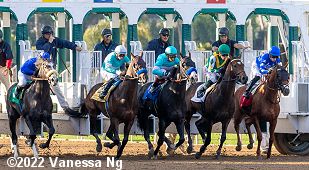 The horses break from the gate for the Sham Stakes

The $100,000 Robert J. Frankel Stakes (G3) featured a field of 7 older fillies and mares going 1 1/8 miles on the turf. Rodeo Drive (G1) and Red Carpet Handicap (G3) runner-up Luck was sent off as the 9-10 favorite over 3-1 second choice Mucho Unusual, an allowance winner after finishing second in the Santa Ana (G3), and 6-1 third choice England's Rose, 4th in the Red Carpet Handicap after winning the Swingtime Stakes. 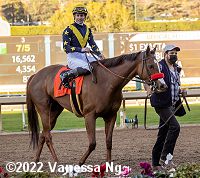 Left: Luck in the winner's circle. Winning jockey Flavien Prat said, "I'm pretty sure the cut back in distance helped. She had some pace to run at and she gave me a good kick when it was time to make a move.  I was saving ground pretty much all the way around and around the quarter pole I thought I had a lot of horse and just wanted to get a good run, she responded well."

Right: Luck returns after the race. Winning trainer Richard Baltas said, "She's a very special filly.  She got beat the last time because of the slow fractions.  They weren't going too fast today, but she ran liked we knew she was capable of running.  We are thankful to have a filly this good and thank the ownership of Jaime Roth and LNJ Foxwoods for this great opportunity.  She is a half-sister to Goldikova, so we have to start looking at a Grade 1 race sooner or later for her." 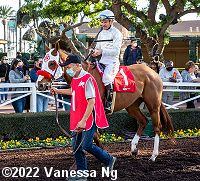 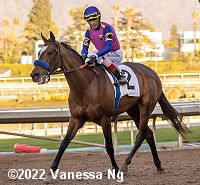 Left: Second place finisher Bodhicitta in the paddock before the race. The Richard Baltas trainee improved her record to 4 wins, 5 seconds, and 3 thirds in 22 starts, earning $364,808 for owner Calvin Nguyen.

Closing out the New Year's Day stakes quartet was the $200,000 La Cańada Stakes (G3) for older fillies and mares going 1 1/16 miles on the main track. After Cowboys Daughter scratched out, Bayakoa Stakes (G3) winner As Time Goes By was sent off as the 3-5 favorite in the field of 5 over 7-2 second choice Park Avenue, winner of 2 straight allowances and making her stakes debut here, and 15-4 third choice Moonlight d'Oro, third in the Bayakoa.

Jockey Juan Hernandez sent Park Avenue to the lead first time by through fractions of 23.46 and 47.00 while pressed by As Time Goes By and stalked by 7-1 fourth choice Velvet Slippers and 43-1 longest shot Fi Fi Pharoah. On the far turn Park jockey Flavien Prat sent As Time Goes By to challenge and she gained a short lead through 3/4 in 1:11.46. Turning for home, As Time Goes By left the field behind, opening up a 7 length lead midstretch through 1 mile in 1:37.27. Geared down by Prat, As Time Goes By finished 13 1/2 lengths clear of Park Avenue in 1:44.31. It was another 4 1/4 lengths back to Moonlight d'Oro third. 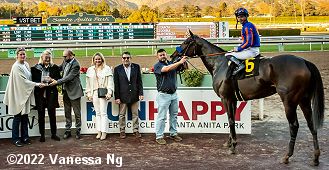 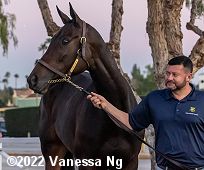 Left: As Time Goes By in the winner's circle. Winning owner Michael Tabor said, "It's very enjoyable. I didn't expect such a win that easily. I was hoping she would win, she duly did, and she like it. A very easy win. Santa Anita is a great facility, fantastic view, everything you could wish for in a racetrack and when you're here and want to bring somebody to the races that has never been to the races, it's a pleasure to bring them here."

Right: As Time Goes By heads back to the barn. Winning trainer Bob Baffert said, "This filly keeps getting better and better with age. I'm really excited. She has always been a barn favorite of mine. She's got that American Pharoah temperament. They seem to be late bloomers and she is getting better all the time. I am expecting big things from her from here. She will stay here, and I think the Grade 1 Beholder would be next for her." Jockey Flavien Prat added, "I got myself in the race and she was travelling super well and ran great down the lane. She settled nice and she had a nice target all the way around, and when it was time to make her run she was there for me." 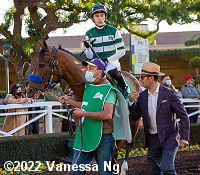 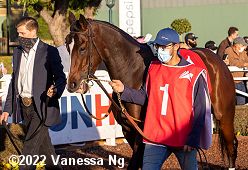 Left: Second place finisher Park Avenue in the paddock before the race. The John Sadler trainee improved her record to 2 wins, 3 seconds, and 1 third in 7 starts, earning $144,700 for owner Hronis Racing.

Right: Third place finisher Moonlight d'Oro in the paddock. The Richard Mandella trainee improved her record to 2 wins, 2 seconds, and 3 thirds in 7 starts, earning $219,790 for owners MyRacehorse and Spendthrift Farm. 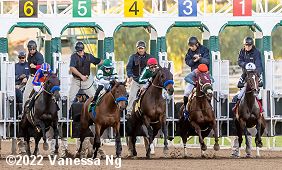 The fillies break from the gate for the La Cańada Stakes.