The feature race on New Year's Day at Santa Anita was the $200,000 Joe Hernandez Stakes (G2) for older horses sprinting 6 1/2 furlongs on the turf. Conditions were excellent in Southern California with sunny skies and a high of 70 degrees. Note that this is the first stakes race to be run out of the newly installed chute on the backstretch as opposed to the downhill "about 6 1/2 furlong" trip down the hill and across the main track, which will no longer be used due to safety concerns. In addition, all competitors ran without Lasix as per the new rules for 2021 introduced by The Stronach Group and other track owners.

Eddie D Stakes (G2) runner-up Wildman Jack was sent off as the 5-2 favorite in the field of 7 off his 7th place finish in the Breeders' Cup Turf Sprint (G1). In to challenge him included 4-1 second choice Chaos Theory, winner of the Green Flash Handicap (G3) but 4th in the Woodford (G2), and 17-4 third choice and last year's winner Texas Wedge, a close second in an allowance after finishing 11th in the Breeders' Cup Turf Sprint.

Jockey Juan Hernandez sent 19-1 longest shot P R Radio Star to the lead down the back through fractions of 21.56 and 44.13 while pressed by Wildman Jack and stalked by Texas Wedge and 9-2 fourth choice Blitzkrieg. Turning for home Blitzkrieg went 4 wide to sweep to the front through 3/4 in 1:07.95, but 5-1 fifth choice Hembree, last early under Joel Rosario after saving ground on the turn, came through on the rail to outfinish 7-1 True Valour to win by 3/4 length. It was a long 3 1/4 lengths back to Blitzkrieg third, while favorite Wildman Jack faded late to finish 6th beaten 5 1/4 lengths. 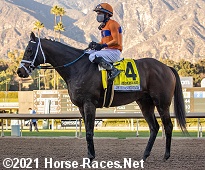 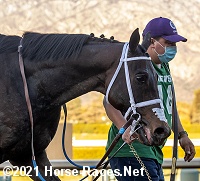 Left: Hembree in the winner's circle. Winning trainer Peter Miller said, "Brilliant, it really was just a fantastic ride by Joel, that’s why he’s one of the world’s best. He’s a very fast horse, he runs fast figures and fast Beyers. The question to me was whether the six and a half was too short for him, but he answered the question the right way."

Right: Hembree heads back to the barn after the race. 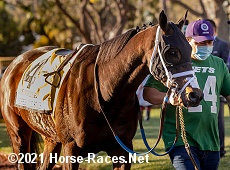 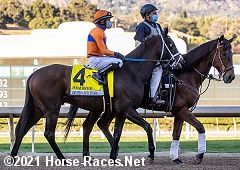 Left: Hembree in the paddock before the race.

Right: Hembree in the post parade. Winning jockey Joel Rosario said, "Pete told me to let him be early and try to make one run with him. He broke well and I thought we were in a good spot, not too far off the lead. He made a nice move around the turn and when that other horse came to him, he tried very hard." 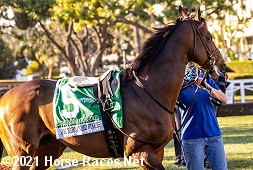 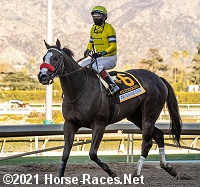 Left: Second place finisher True Valour in the paddock before the race. The Graham Motion trainee improved his record to 6 wins, 3 seconds, and 8 thirds in 30 starts, earning $502,237 for owner R. Larry Johnson. 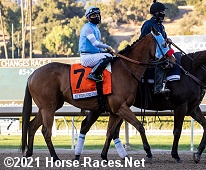 Sixth place finisher and beaten favorite Wildman Jack in the post parade. The Doug O'Neill trainee has a record of 4 wins, 3 seconds, and 1 third in 13 starts, earning $439,505 for owner W C Racing Inc.