There were two graded stakes contested on the second Saturday of the Saratoga summer meeting. Conditions were excellent with sunny skies and temperatures in the low 80's for the 31,812 fans in attendance.

The $600,000 Jim Dandy Stakes (G2) is the major local prep for the Travers (G1) to be run 4 weeks later. A field of 6 three-year-olds contested this 1 1/8 mile main track test, with Tonalist sent off as the 9-10 favorite off his wins in the Peter Pan (G2) and Belmont Stakes (G1). In to challenge him included 2-1 second choice Wicked Strong, winner of the Wood Memorial (G1) before finishing fourth in both the Kentucky Derby (G1) and Belmont, and 11-2 third choice Kid Cruz, winner of the Easy Goer and the Dwyer (G3).

Jockey Luis Saez sent 8-1 fourth choice Legend to the lead and he set fractions of 24.45, 47.73, and 1:11.36 while pressed by Wicked Strong to his outside. Entering the stretch, Legend tired badly as Wicked Strong inherited the lead, getting the mile in 1:36.21. Tonalist, who tracked the leaders in third, came out 4 wide for room and challenged for the lead, but Wicked Strong dismissed him easily, drawing off to win by 2 1/4 lengths in 1:49.16 over the fast main track. It was another 3 3/4 lengths back to Kid Cruz third. 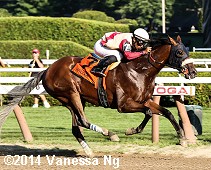 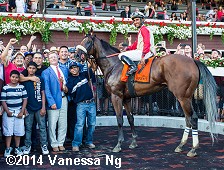 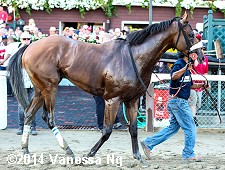 Left: Wicked Strong in the winner's circle. Winning trainer Jimmy Jerkens said, "He always seemed to be running with his head cocked to the outside in his other races. I didn't really notice that today. I thought he ran straight and true today. Rajiv was scrubbing on our horse pretty good, but Tonalist had to run to get up to him, so it was starting to tell on him, too. Rajiv took him a couple of horse widths out when he saw Tonalist coming, and that discourages a horse that's coming up from behind you, too. That's race riding. That's what you have to do. It was probably just enough to discourage him a little bit and when we straightened away we kind of kicked away and it made the difference."

Right: Wicked Strong heads back to the barn. Jerkens added, "This is really great. The way he works in the morning, I don't think Secretariat worked any better than this horse does in the morning. I know the talent's there. It's just getting him to put it all together. It was a different dimension where he was up close to the pace and he didn't get by that speed horse too easy. He had to run to get the best of him and then Tonalist was right there. I think he showed a lot of class today." 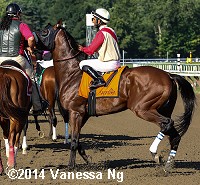 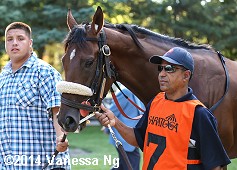 Left: Wicked Strong in the post parade. Jockey Rajiv Maragh said, "This is his second big win. He always runs very good, very close to winning some more days; he kind of put it all together today and put on a good performance. Being a small field, we didn't have one set game plan. Kind of wanted to get him sharp out of the gate and see how the race developed. We talked about if he was giving it to me good early, don't take it away from him."

Right: Wicked Strong in the paddock. Maragh added, "He was very aggressive today; he put me in the race, which I was happy about.  Tonalist made a bold move, and I thought, 'It's going to be a good horse race' from there and Wicked Strong just dug in and found extra and pulled away at the end. With the blinkers, he wasn't loafing down the backstretch.  He was running into a nice rhythm and didn't go on and off the bridle, which he was doing in his prior starts. He was more focused today, and more aggressive." 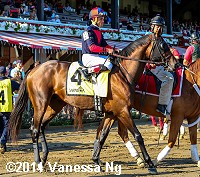 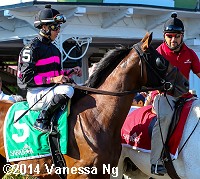 Left: Second place finisher and beaten favorite Tonalist heads out for the post parade. Jockey Joel Rosario said, "I don't think (the slow break) mattered. He's not very quick out of the gate. I thought he was in a good position on the backside. Turning for home, I thought I had Wicked Strong, but he just kept on going. When I turned for home, it looked like I could go by him, but he was better today."

Right: Third place finisher Kid Cruz heads out for the post parade. Trainer Linda Rice said, "It was kind of an odd trip for him, he was up early and dropped way out of it. It wasn't the plan (to send him to the front); they just weren't going very fast so Irad got after him early and then he got shuffled back, and then he took himself out of it, and then he came again. He was running at the end of it and we're very happy with his race. I think it sets us up well for the Travers."


Kicking off the stakes action on Saturday was the $200,000 Amsterdam Stakes (G2) for 3-year-olds sprinting 6 1/2 furlongs on the main track. Mike Lee Stakes winner Captain Serious was sent off as the 7-5 favorite in the field off his close second in the Dwyer (G3). In to challenge him included 9-5 second choice Coup de Grace, winner of the Bay Shore (G3) and Oh Say Stakes but 6th in the Woody Stephens (G2). and 11-2 third choice Tiznowforamerica, off an allowance win at Belmont.

7-1 C. Zee battled for the lead with 28-1 longest shot Big Guy Ian down the backstretch and around the turn through quick fractions of 21.87 and 44.45 while stalked by Captain Serious. Entering the stretch, Coup de Grace, 6th early, came out 4 wide for room and swept to the lead at the 1/8 pole through 3/4 in 1:08.93. Kept to task by Rosie Napravnik he drew off to win by 3 lengths over C. Zee in 1:15.32. It was another 2 lengths back to favorite Captain Serious third. 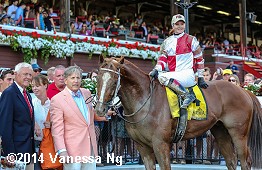 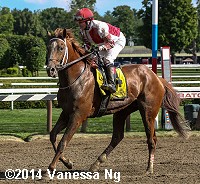 Left: Coup de Grace in the winner's circle. Winning owner Rick Porter said, "In his last two races he's found his style, coming from off the pace and making one big run. Rosie rode him perfectly today. I don't know all the best 3-year-old sprinters in the country, but our numbers are good. We've got to keep him healthy and bring him back in four weeks (King's Bishop), hopefully. We'll find out how good he is."

Right: Coup de Grace returns after the race. Jockey Rosie Napravnik said, "He's a very nice horse. I spoke to Larry (Jones, trainer) this morning and rode him with a lot of confidence. He did it easily today." 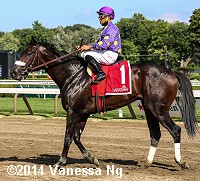 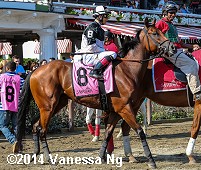 Left: Second place finisher C. Zee returns after the race. The 7-1 fourth choice contested the pace under jockey Luis Saez, but could not contain the winner late. The Nick Zito trainee improved his record to 3 wins, 3 seconds, and 3 thirds in 10 starts, earning $248,950 for owner Fred Brei.

Right: Third place finisher and beaten favorite Captain Serious heads out to the track before the race. Jockey Jose Ortiz said, "It was a good spot. I came up a little empty by the 3/16 pole. My horse tried, but the winner - the horses that finished first and second - they ran extremely fast. He kept fighting and ran good." 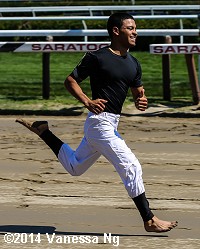 Earlier in the card, the jockey colony competed in a 1/16 mile foot race out of the starting gate in support of the Permanently Disabled Jockeys' Fund. Many of the riders competed barefoot or in socks and played up acting like a horse. The Ortiz brothers Jose and Irad Jr. competed as a "coupled entry" with numbers 1 and 1A. John Velazquez stumbled badly at the start (landing face down). Luis Saez (4) finished first with Manuel Franco (7) second and Dylan Davis (6) third.

Saez said, "When I was younger I would run a lot with my brother. I would try to see how fast I was. I think I have a lot of speed. I feel very glad and excited because this is big (for the PDJF)."