The $500,000 Joe Hirsch Turf Classic Stakes (G1) is the major New York prep for the Breeders' Cup Turf, but is not part of the Breeders' Cup Challenge Series. Traditionally run at Belmont Park during the Fall Championship Meeting, the meet will be conducted at Aqueduct for at least 2 years as Belmont is being rebuilt. Conditions were typical for October at Aqeuduct, with partly cloudy skies and temperatures near 60, main track rated fast and both turf courses downgraded to "good" due to light rain overnight. A field of 7 made final entry for this 1 1/2 mile trip around three turns of the main (inner) turf course, with mare War Like Goddess sent off as the 9-10 favorite off her close second in the Flower Bowl (G2) after winning the Glens Falls (G2). In to challenge her included 3-1 second choice Gufo, a close second in the Kentucky Turf Cup (G2) after winning the Sword Dancer (G1), and 6-1 third choice Soldier Rising, third in the Sword Dancer. 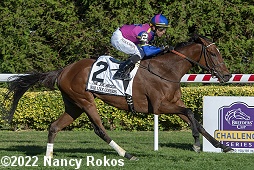 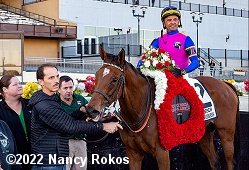 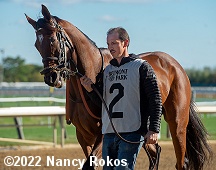 Left: War Like Goddess in the winner's circle. Winning trainer Bill Mott said, "I was hoping when [Lezcano] went down the backside and only had one turn left [she would be outside]. He tipped her out and from there, there shouldn't be any excuse of getting in trouble. It looked like at the eighth pole she got to [Bye Bye Melvin] and she wasn't doing it on her own. He did tap her and then she went on. It looked like he tapped her and then the second time he tapped her, she really went. "I always thought she belonged [against males in the BC Turf]. There's good horses and she could get outrun, but I think she deserves an opportunity, for sure. I don't think we're out of line whatsoever. We're a long ways from the winner's circle, but I think she deserves her opportunity. She's done nothing wrong."

Right: War Like Goddess walks over before the race. 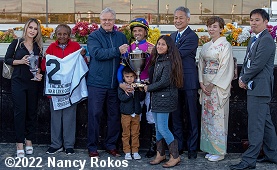 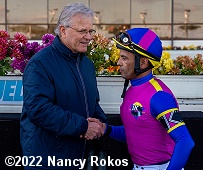 Trophy presentation for the Joe Hirsch Turf Classic. Winning jockey Jose Lezcano said, "Bill is very easy. He told me the horse can lug in or out, but he never told me, 'I want you here or over there.' The filly is very easy to ride. She broke very good and I moved her up a little more than I wanted to, but she seemed a little quiet so I moved her up a little more. I wanted position at the start of the race and the one [Bye Bye Melvin] and the four [Astronaut] went, so I sat right there. I stepped aside and stayed there the whole way around. It was very easy to get there, there were only seven horses. She's a very nice mare and she does everything right. When I asked her, she gave me her race. She's a very good horse. When you ride a horse for Billy, you've always got a chance to win this kind of race." 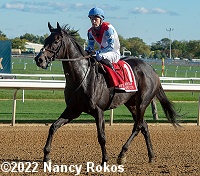 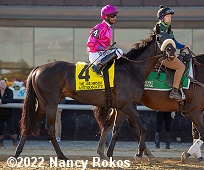 Left: Second place finisher Bye Bye Melvin returns after the race. Jockey Feargal Lynch said, "[Going to the lead] was the game plan. He was the only speed in the race, so we just let him go to the lead. He sat and relaxed nice. He was picking it up and doing everything right. We just got run down by a nice horse. We've very proud of him. He kept galloping all the way. He's a good horse and he belongs here. I'm just happy he showed how good he is."

Right: Third place finisher Astronaut heads out to the track before the race. The Tom Albertrani trainee improved his record to 2 wins, 5 seconds, and 1 third in 13 starts, earning $346,860 for owner John O'Connor. 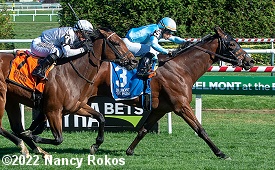 An hour before the Hirsch, a field of 11 two-year-old fillies (after 2 scratches) contested the $150,000 Matron Stakes (G3), a 6 furlong sprint on the outer turf course. Danse Macabre was sent off as the 5-2 favorite off her win in the Untapable Stakes at Kentucky Downs. In to challenge her included 11-4 second choice Redifined, third in the Bolton Landing at Saratoga, and 4-1 third choice Dontlookbackatall off her debut win at Saratoga on August 25.

Jockey Jose Lezcano sent 48-1 Fleetfooted to the lead through fractions of 22.55 and 46.06 while pressed by 12-1 Sweet Harmony and stalked by 47-1 American Apple. Turning for home, Fleetfooted and Sweet Harmony tired allowing American Apple to inherit the lead through 5f in 57.89. Redifined put in a strong rally from 9th but American Apple, confidenly ridden by Eric Cancel, held her off by a neck for the upset in 1:09.59. It was another 1 1/2 lengths back to favorite Danse Macabre third. 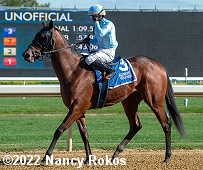 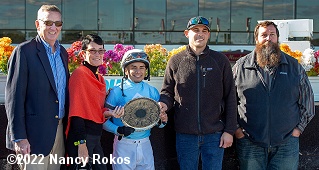 Left: American Apple heads to the winner's circle. Winning owner Larry Doyle said, "We didn't think we were 30-1, but we thought there were seven speed horses in there. We knew what we had and it was going to be a tough race. We were only here because there was nowhere else to run. If there were an easier spot, that's where we would have been. We always thought this horse had the goods and only did it in the morning but never in the afternoon. The key is getting her to relax. She has that quarter burst of speed, but she has to settle down before she gets to it and then she's tough at the end. [Next start is] either [BC Juvenile Turf Sprint] or come back here in a month for the Stewart Manor."

Right: The trophy presentation for the Matron. Winning jockey Eric Cancel said, "The filly broke very well from the gate and I saw that she didn't want to be in front, so I let the other two go and covered her up. Once I had an opening at the 1/4 pole to go, I asked her and she did the job. It didn't matter if it would have been a little bit quicker, she could be there. She just wants to be covered up. Once I did that, she was just waiting for me to ask her to do her job." Trainer Daniel Leitch added, "I started training last September. I was doing sales prep, foal watch, breaking the babies and I slowly wanted to get on the track. I worked for Ray [Handal] for a little bit and then I started working for Mark [Hubley] for four years and then I got my chance. I won my first start with a filly named Midway's Angel at [Horseshoe Indianapolis] and that got me off to a good start. Ever since that, we've just been rolling."

Right: Third place finisher and beaten favorite Danse Macabre walks over before the race. Jockey Adam Beschizza said, "I was a little bit flat footed for the first two furlongs. I was struggling to go with the early speed. I got comfortable around the turn and got right behind the winner. We started sprinting for home – they actually didn't go that quick – but the winner had the best of me. I stayed on very evenly, but the winner showed me a good, clean pair of heels today. The course is beautiful, good ground. There's no jar in it and it's not too soft." 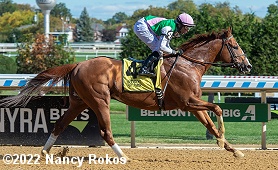 Kicking off the Saturday graded stakes trio was the $250,000 Vosburgh Stakes (G2), a 7 furlong main track sprint and a Breeders' Cup Challenge Series event in the Sprint division. A short field of 5 made final entry with Elite Power sent off as the 1-2 favorite in his stakes debut off a 3 race win streak in allowance company at Churchill Downs and Saratoga. In to challenge him included 3-1 second choice Southern District, fourth in the Tale of the Cat Stakes at Saratoga, and 11-2 third choice Drafted, fifth in the Forego (G1) at Saratoga.

20-1 longest shot Jalen Journey was quickest out of the chute through an opening quarter of 23.66 before jockey Jose Lezcano sent favorite Elite Power to the lead on the turn through a half in 47.68. Turning for home, Elite Power left the field behind, opening up a 2 1/2 length advantage midstretch through 3/4 in 1:11.87. 9-1 fourth choice Eastern Bay rallied from last but Elite Power cruised the rest of the way to win geared down by 5 3/4 lengths in 1:23.98. It was another 5 lengths back to Drafted third. 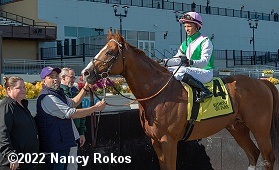 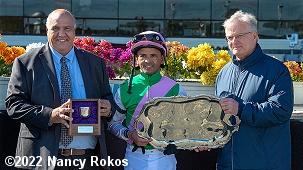 Left: Elite Power in the winner's circle. Winning trainer Bill Mott said, "He broke and he was closer than normal and that didn't seem to bother him. He was fine where he was at. They went the first half in 47, but you go to a race like the Breeders' Cup and they'll go 44. He's a good closer. If he gets a good, fast pace in front of him, he can close going 6 or 7 [furlongs]. We get a free ticket into the Breeders' Cup, so I'll see what (Juddmonte general manager Garrett O'Rourke) wants to do. All things being equal, he'll probably race next year and have another race this year. I don't know that you'll get any sprint races with a slow pace like this. It's not a matter of what he wants to do, I think he's just going to have to adapt to a different pace scenario other than what he had today. He had to adapt today from what he was used to previously."

Right: The trophy presentation for the Vosburgh. 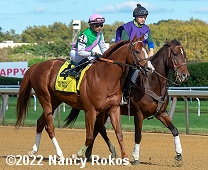 Elite Power in the post parade. Winning jockey Jose Lezcano said, "When he broke, I made a decision to let him be [close to the pace] and go for it. He was very comfortable the whole way around. When I saw [Eastern Bay], I showed the whip and [he went on]. He did it pretty easy today. When I showed the whip at the 3/16, he really took off and went on to win the race very comfortable." 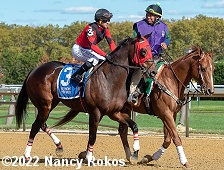 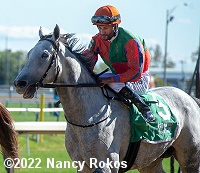 Left: Second place finisher Eastern Bay in the post parade. Jockey Javier Castellano said, "We were just second best, we couldn't catch the winner. The winner was much the best in the race. My horse deserved second place and beat the rest of the horses pretty well. I'm very satisfied with the way he did it. Unfortunately, it was a short field and we didn't see much speed. He's a come-from-behind horse. I wish there could have been a little more pace in the race, but that's what we've got to deal with. I think they'll look at the big times in the future with the horse."