The $500,000 Joe Hirsch Turf Classic Stakes (G1) is the major New York prep for the Breeders' Cup Turf, but this year is not part of the Breeders' Cup Challenge Series. Conditions were typical for October at Belmont Park, with overcast skies and temperatures in the low 70's, main track rated fast and both turf courses firm. A field of 7 made final entry for this 1 1/2 mile trip around two turns of the Widener course, with Gufo sent off as the 9-5 favorite off wins in the Grand Couturier and the sword Dancer (G1). In to challenge him included 2-1 second choice Japan, 2nd in the Sword Dancer after winning the Meld Stakes (G3) at Leopardstown, and 7-2 third choice Arklow, a close second in the Calumet Turf Cup (G2) at Kentucky Downs. 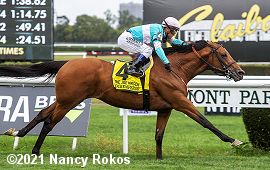 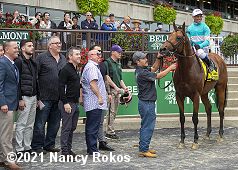 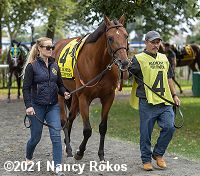 Left: Rockemperor in the winner's circle. Winning trainer Chad Brown, who trains the first two finishers, said, "I thought he [Rockemperor] would be closer. I thought he could be relatively close, but not pulling. When it was a little bit crowded at the start, he found himself behind. I was quite worried because of his late one-paced nature that if he's around those other horses like Gufo - who seem to kick a little harder than him - that he'd be in trouble. But this horse really responded today and Javier really fit him perfectly." Brown added he may send the first two finishers to the Breeders' Cup Turf.

Right: Rockemperor in the paddock before the race. 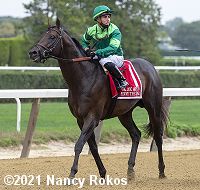 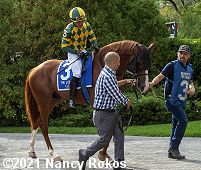 Left: Second place finisher Serve the King heads out of the paddock before the race. Trainer Chad Brown said, "I've always been wanting to run that horse long. His season came to an end last year – he had a minor injury, but I was going to run him in the Red Smith. To re-start a horse like this, I had to build him up by giving him a mile and an eighth race [at Monmouth] and I finally got him out to a long race in the U.N. and he had a lot of trouble there. He should have been second to Tribhuvan. He had a lot of trouble in the stretch."

Right: Third place finisher and beaten favorite Gufo returns after the race. Jockey Joel Rosario said, "He takes his time [out of the gate]. He is how he is. We made a big move and I thought we were going to win the race, but those two ran me down at the end." 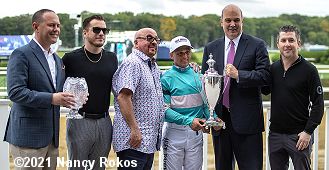 Trophy presentation for the Joe Hirsch Turf Classic. Winning jockey Javier Castellano said, "I think you have to have a lot of patience and a lot of confidence with him because if you move a little bit he grabs the bit. I think my key today was to switch off and let him relax the first part and hopefully he'd give it back to me in the last part and that's exactly what he did." 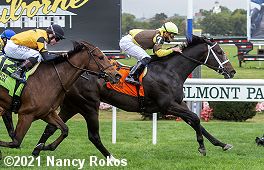 Immediately before the Hirsch, a field of 9 two-year-old fillies (after 3 scratches) contested the $150,000 Matron Stakes (G3), a 6 furlong sprint on the inner turf course. Bubble Rock was sent off as the 3-2 favorite off her maiden win at Saratoga at second asking. In to challenge her included 7-2 second choice Mystic Eyes, second in the Ainsworth Stakes at Kentucky Downs, and 15-4 third choice Lady Danae, 5th in the Ainsworth.

Jockey Manny Franco sent Mystic Eyes to the lead through fractions of 21.35 and 44.24 while pressed by 5-1 fourth choice Makin My Move and stalked by Bubble Rock and Lady Danae. Turning for home, Mystic Eyes continued to lead through 5f in 55.88 but Bubble Rock, moved out 3 wide by Irad Ortiz Jr., rallied to take over inside the 1/16 pole to win by 1/2 a length over late-running 30-1 Gal in a Rush in 1:08.01. It was another 1/2 length back to Mystic Eyes third. 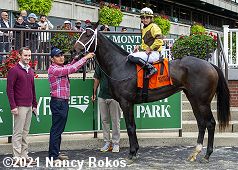 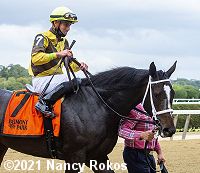 Left: Bubble Rock heads to the winner's circle. Dustin Dugas, assistant to winning trainer Brad Cox said, "She's progressed a lot mentally. She's been a very nervous filly to work with and she's kind of taken some time. She's really progressed mentally and physically she's a very big, good-looking filly and moves great. We'll take her back to the barn and assess her and let the boss [Brad Cox] and the owners chew on it (the Breeders' Cup Juvenile Turf Sprint) and go from there."

Right: Bubble Rock heads to the winner's circle. Winning jockey Irad Ortiz Jr. said, "She's nice. Last time she won and finished well, too. I just did the same thing today. I waited for my time to go and when I asked her, she finished up really strong again. She's got a really good size to her and she always finishes well, so I think she'll be alright." 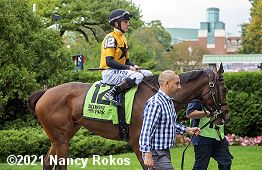 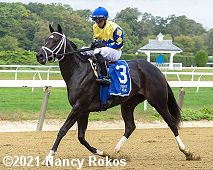 Left: Second place finisher Gal in a Rush heads out of the paddock. Jockey Dylan Davis said, "There was a lot of speed in there, so I just let her settle down in there and made that one late kick at the end. She gave me a huge run in the stretch. She ran really well today." 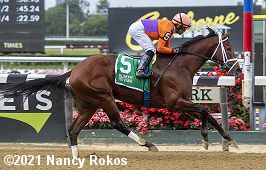 Kicking off the Saturday graded stakes trio was the $250,000 Vosburgh Stakes (G2), a 6 furlong main track sprint and a Breeders' Cup Challenge Series event in the Sprint division. After Jalen Journey scratched, a short field of just 4 went to post with Firenze Fire sent off as the 11-10 favorite. In to challenge him included 3-2 second choice Baby Yoda, 5-2 third choice Following Sea, and 20-1 longest shot Good Effort.

Jockey Joel Rosario sent Following Sea to the front and he set fractions of 22.59 and 45.24 while pressed by Firenze Fire and stalked by Baby Yoda, with Good Effort trailing. Turning for home, Following Sea left the field behind, opening up a 3 length lead through 5f in 56.93, and drawing off under a hand ride by 4 3/4 lengths over Firenze Fire in 1:09.20. It was another 2 1/2 lengths back to Baby Yoda third, and 4 3/4 more to Good Effort last. 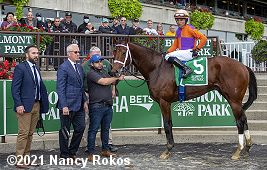 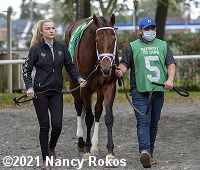 Left: Following Sea heads to the winner's circle. Winning trainer Todd Pletcher said, "We left the paddock with the idea that we won't take anything away that comes easily. If he breaks well, that's great. If he gets in a speed duel, that's okay, too. So, I said to use judgement and it looked like he made a decision pretty easily. When he made the lead that easily I was pretty confident. He looked like he kicked on pretty well and Joel wrapped up on him pretty late."

Right: Following Sea in the paddock before the race.

Winning jockey Joel Rosario looks back at the competition in the stretch. Rosario said, "I just helped him out of there. It looked like he broke really well and he put himself on the lead. I thought he liked that and he ran a big race. Todd just told me to ride him the way it came up. He broke sharp and I asked him a little bit to get a position. If somebody else goes, I could sit second but I decided to go to the lead because I was there. He ran really well." 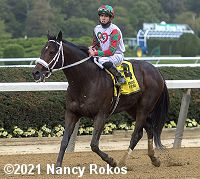 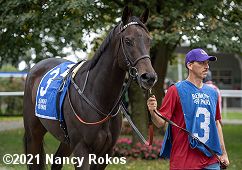 Left: Second place finisher and beaten favorite Firenze Fire returns after the race. Trainer Kelly Breen said, "[Following Sea], we gave him six pounds. I think we move forward and go towards the Breeders' Cup. It's going to be a hot pace. Whether it's Jackie's Warrior or [Following Sea], no one is going to have an easy lead in a slow pace. It's going to be a heated event. We're not a speed horse per se and I think we move on to the Breeders' Cup."