The $600,000 Joe Hirsch Turf Classic Stakes (G1) is a "Win and You're In" qualifier for the Breeders' Cup Turf. A field of 7 older horses contested this 1 1/2 mile trip around 2 turns of Belmont Park's Widener Turf Course under sunny skies and temperatures in the low 70's. Bowling Green (G2) winner Red Rifle was sent off as the 8-5 favorite off a second place finish in the Sword Dancer (G1). In to challenge him included 5-2 second choice Big Blue Kitten, second in the Arlington Million (G1) last out, and 7-2 third choice Slumber, winner of the Manhattan (G1) but 6th in the Arlington Million. 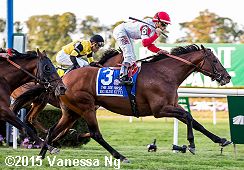 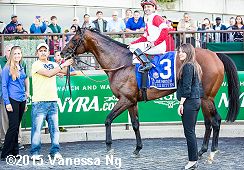 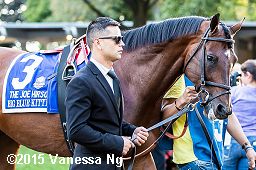 Left: Big Blue Kitten in the winner's circle. Winning trainer Chad Brown said, "Big Blue Kitten got the better of (stablemate) Slumber at 1 1/2. I'm proud of both horses. The race pretty much went the way I expected. Shining Copper has run admirably all summer as the pacemaker for us; nearly won a couple of Grade 1s.  I didn't want to deter from our plan of him being the pacemaker, and we stuck with that plan. He did his job and set up the race for Big Blue Kitten and his stablemate. Maybe with 70 yards to go, I was a little concerned, but he had enough."

Right: Big Blue Kitten in the paddock before the race. Winning jockey Joe Bravo said, "You're watching the pace, but it's kind of nice to sit back and see the pace unfolding. The pace was sort of 'stop go, stop go' but at the top of the stretch, I said 'go' and he said 'okay.' I had my hands full with him but I thought. 'hey, let them catch us now.' When it comes down to it, he's an amazing horse and he deserves to hold a track record." 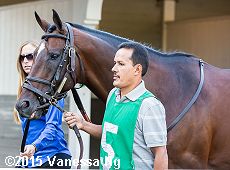 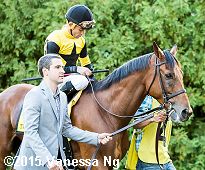 Left: Second place finisher Slumber in the paddock. Jockey Irad Ortiz Jr. said, "I had a perfect trip. No complaints. I just got beat by the best horse. I'm happy for my horse because the last time he got in a lot of trouble and I never really got to ask him to run. He didn't have any trouble today, he got a clear trip and showed that he can run with those horses."

Right: Third place finisher Twilight Eclipse heads out to the track before the race. The 5-1 fourth choice sat midpack 4th under Joel Rosario then rallied to just miss second by a nose. The Tom Albertrani trainee improved his record to 7 wins, 5 seconds, and 7 thirds in 28 starts, earning $1,822,986 for owner West Point Thoroughbreds. 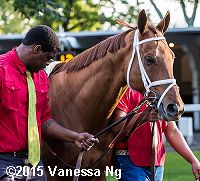 Fourth place finisher and beaten favorite Red Rifle in the paddock before the race. Jockey Javier Castellano said, "He ran a good race. It was a good setup, no speed in the race I just followed the pacesetter all the way, it just wasn't his day today." 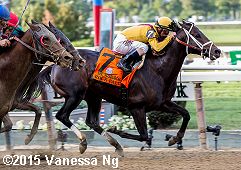 The $400,000 Vosburgh Stakes (G1) is a "Win and You're In" qualifier for the Breeders' Cup Sprint. A field of 7 older horses contested this 6 furlong main track event, with Rock Fall sent off as the 2-5 favorite off a 6 race win streak including the True North (G2) and A.G. Vanderbilt (G1). In to challenge him included 5-1 second choice Palace, last year's winner but 5th in the Carter (G1), and 7-1 third choice Salutos Amigos, fifth in the Forego (G1).

10-1 Wildcat Red and 29-1 Weekend Hideaway dueled down the backstretch and around the turn through opening fractions of 22.23 and 45.21 over the fast main track while stalked by Rock Fall. Entering the lane, 13-1 Stallwalkin' Dude, 5th early, moved up to gain a short lead through 5/8 in 56.61. Rock Fall, 3 wide into the stretch, outfinished late-running Salutos Amigos by a neck in 1:08.70. It was a head back to Stallwalkin' Dude third. 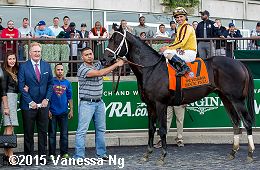 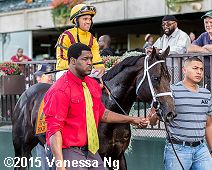 Left: Rock Fall takes his walk down Victory Lane. Winning trainer Todd Pletcher said, "Watching in the mornings, he can be a little idle, but you just have confidence that come game time he'll show up. I didn't quite overdo it with training coming into this race. I wanted to get this one and still have something for the Breeders' Cup, so I was hoping I didn't cut it too close and he pulled it out. It's a fine line between running well in the prep and hoping you have something left for the Breeders' Cup. He's been winning races since March and 7 in a row so we just want to continue ticking over."

Right: Rock Fall in the winner's circle. Winning jockey Javier Castellano said, "The race set up for me perfect today, even though we had an outside post. With that kind of position, I had to make my own decision, use my own judgment. The other horses sort of forced me to the outside out of the gate and we went towards the lead and stayed in third but kept track of the other horses. Turning for home, I asked him and he just took off for me, very easily. It was perfect though and a good set up for my horse." 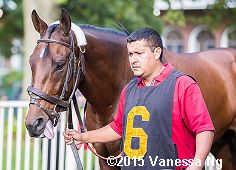 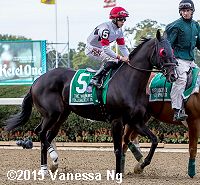 Left: Second place finisher Salutos Amigos in the paddock before the race. The 7-1 third choice sat 6th under Cornelio Velasquez then rallied into the lane but just missed. He improved his record to 10 wins, 3 seconds, and 4 thirds in 32 starts, earning $1,069,906 for owner-trainer David Jacobon and co-owner Southern Equine Stable.

Right: Third place finisher Stallwalkin' Dude in the post parade. The 13-1 shot sat 1 1/2 lengths off the pace under Irad Ortiz Jr. then rallied to get third beaten just a neck. He improved his record to 12 wins, 4 seconds, and 5 thirds in 33 starts, earning $608,352 for owner-trainer David Jacobson. 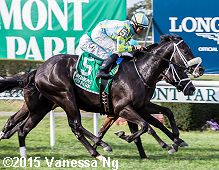 The $200,000 Pilgrim Stakes (G3) is not a Challenge race but is a useful prep for the Juvenile Turf as it features 2-year-olds going 1 1/16 miles on the inner turf. Saratoga debut winner Eidmilaad was the 5-2 favorite in the field of 10 over 3-1 Ray's the Bar, winner of his debut at Ascot in July, and 11-2 Next Shares, second in the With Anticipation (G2) and winless in 2 starts. 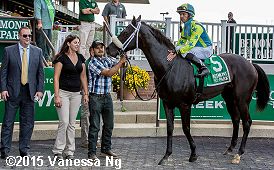 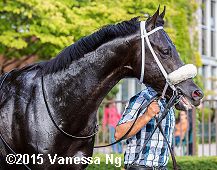 Left: Isotherm in the winner's circle. Winning owner Matther Schera said, "Everyone can see he's one of the prettier horses around. I kept telling everyone that he trains better than he ran last time, but he still won so we kind of expected something more today and it looks like  he came out and he did it. We even think he likes the dirt too, so we'll see down the road for that. As long as he comes out good and he's healthy, we'll go to Keeneland for the Breeders' Cup Juvenile Turf."

Right: Isotherm heads back to the barn after the race. Winning jockey Jose Lezcano said, "He was in a good position the whole way. At the 1/2 mile pole, everybody started to move a little bit and the pace started to quicken, so I had to move with the group. After that I got cut out but this is a very talented horse. He does everything easy. When everyone started moving, I had some pressure and was a little out of it but he still did everything right." 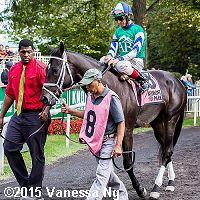 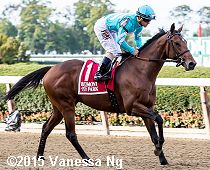 Left: Second place finisher Azar in the paddock. The 6-1 shot raced midpack 4th under John Velazquez, gained the lead in the stretch but was outfinished. The Todd Pletcher trainee has a record of 1 win, 2 seconds, and 0 thirds in 4 starts, earning $176,850 for owner Alto Racing.

Right: Third place finisher Ray's The Bar in the post parade. The 3-1 second choice was unhurried under Javier Castellano then rallied strong to get third beaten a neck. The Chad Brown trainee improved his record to 1 win and 1 third in 2 starts, earning $30,038 for owners Head of Plains Partners and Vintage Thoroughbreds.