The highlight of the Belmont Park Fall Championship Meeting is the $1 million Jockey Club Gold Cup (G1), a "Win and You're In" qualifier for the Breeders' Cup Classic, contested at the Classic distance of 1 1/4 miles on the main track. A field of 12 older horses were entered but after an incident in the paddock, Prayer for Relief was scratched by the veterinarian. Belmont Stakes (G1) winner Tonalist was sent off as the lukewarm 3-1 favorite in the field of 11 off his second n the Jim Dandy (G2) and third place finish in the Travers (G1). In to challenge him included 7-2 second choice Wicked Strong, second in the Travers after winning the Jim Dandy, and 4-1 third choice Zivo, fourth in the Woodward after winning the Suburban (G2).

24-1 Big Cazanova battled for the lead with 5-1 fourth choice Moreno through fractions of 23.60 and 47.42, while stalked by 52-1 Long River. After 3/4 mile, Wicked Strong clipped heels with Moreno, unseating jockey Rajiv Maragh. Wicked Strong completed the race distance riderless but on the far outside away from traffic. Long River gained a short lead through 3/4 in 1:11.36 and 1 mile in 1:37.11, but tired in the final 1/8. Tonalist, 9th early, came through between horses to win going away by 1 3/4 lengths over late-running Zivo in 2:02.12. It was another 2 lengths back to Long River third. There was a stewards' inquiry into the incident at the 1/2 mile pole, with fourth place finish Moreno disqualified to last for interfering with Wicked Strong.

Check out the other races on the card: The Beldame, Joe Hirsch Turf Classic, The Vosburgh, The Flower Bowl, and Kelso Handicap. 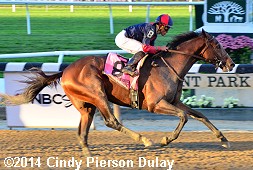 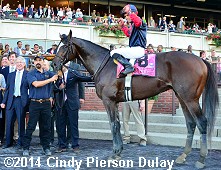 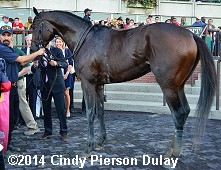 Left: Tonalist in the winner's circle. Trainer Christophe Clement said, "I probably should have removed the blinkers before the Travers. He, obviously was a bit too aggressive in the Travers. Even so, he didn't quit. I love the way that, even when he got beat in the Travers he went on to the wire. A great ride. Joel is just so laid back. He was always in his space, always in his stride."

Right: Tonalist gets unsaddled. Jockey Jose Lezcano said, "I thought I would be laying third or fourth, but he didn't break that quick. He didn't get out very quick, but I just let him run on his own. When I passed the half-mile, and (Rajiv Maragh) fell in front of me, it scared me a little bit and I was just trying to get out of the way. After that I tried to save ground. I was hoping to go through on the inside, but the opening closed up and I had to go around." 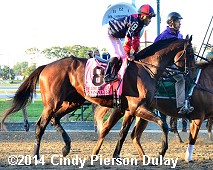 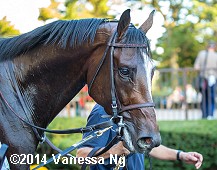 Left: Tonalist in the post parade. Trainer Christophe Clement added, "Tonalist doesn't need the blinkers anymore. I should have realized before that he was more mature. They went 47 and change. They went fast enough that I knew they'd come back a little bit. From the 3/8 on, he looked really good. He was closer and closer, and you could see the horse was going really well."

Right: Tonalist heads through the paddock back to the barn after the race. 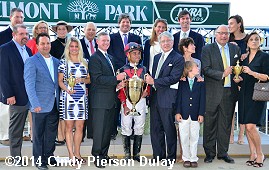 The trophy presentation for the Jockey Club Gold Cup. Jockey Jose Lezcano added, "He relaxed very nicely. I was probably a little far back but I wasn't worried about it; I didn't want to make him do something he didn't want to do. I could see turning for home they were coming back to me and he found a way through. I'm happy we got the money. He's a one-paced horse, and when he starts going, he goes forever. I was really happy with the trip." 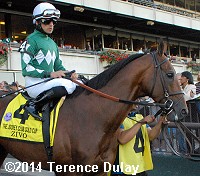 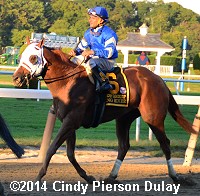 Left: Second place finisher Zivo heads out to the track. Trainer Chad Brown said, "There was so much going on with the loose horse. I thought my horse was eliminated at that point (when the jockey fell), and then when he comes with a second run after really just taking up down the backside, I was just really glued to my horse to see if he could get through. I'd love to take him out to the Classic. I feel like we have one of the better older handicap horses going 1 1/4 on the dirt in the country."

Right: Third place finisher Long River returns after the race. Trainer Kiaran McLaughin said, "He ran huge. We've been disappointed with his races at times, but we just felt like he was doing so well and that he would love the 1 1/4. We had everything to gain and nothing to lose. He ran very well and it's great for the team. I thought we had a really big chance to win down the lane."

Check out the other races on the card: The Beldame, Joe Hirsch Turf Classic, The Vosburgh, The Flower Bowl, and Kelso Handicap.