The first Saturday of the Belmont Park Fall Championship Meeting saw the inaugural runnings of 3 stakes races, two of which concluded NYRA's Turf Triple Series. It was overcast most of the afternoon with temperatures in the mid 70's, the main track fast and the turf courses downgraded to good due to rain on Friday. The highlight race of the afternoon was the $1 million Jockey Club Derby Invitational for 3-year-olds going 1 1/2 miles on the Widener turf course, the third leg of the Turf Trinity for males as well as a Breeders' Cup Challenge race in the Turf division. Spanish Mission was sent off as the 2-1 favorite in the field of 9 off his close third place finish in the Gordon Stakes (G3) at Goodwood after winning the Bahrain Trophy (G3) at Newmarket. In to challenge him included 5-2 second choice Digital Age, 2nd in the Saratoga Derby after finishing 4th in the Belmont Derby (G1), and 3-1 third choice A Thread of Blue, winner of the Saratoga Derby. 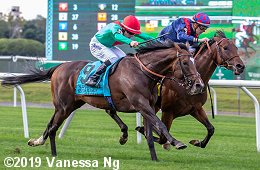 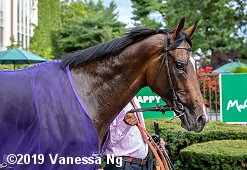 Left: Spanish Mission in the winner's circle. Winning co-owner Barry Irwin of Team Valor said, I think he'll get better with age. When I bought him, the plan was to leave him in Europe this year and then bring him to America next year. Halfway through the season, I realized this is strictly a European horse and I told my guys, 'He's never coming home, but I'll bring him for this race.' We're looking at the Melbourne Cup with this horse. Earle [Mack, co-owner] would rather win that race than anything, and I'd like to win it as well. We're having a good year. Recently, all these European horses that I bought have been hitting right and left. I spent a lot of time the past year and a half getting good horses over there and it's all paying off."

Right: Spanish Mission heads back to the barn after the race. Winning jockey Jamie Spencer said, "He didn't break that well but I wasn't too concerned. I was happy he was relaxed and found his rhythm coming along the backside. Going into the final turn he was giving me all he had. I dropped my right rein and even though I was using the crop, when you drop your reins in a race, it typically signals to the horse that the race is over. I would've been mad with myself had we lost but he got back on his game and finished strong. He was a very game horse today." 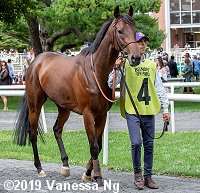 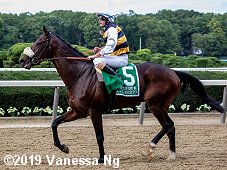 Left: Second place finisher Pedro Cara in the paddock before the race. Jockey Tony Piccone said, "We had a very good race, but just couldn't get there at the end. It's disappointing not to win, but a good effort."

The $750,000 Jockey Club Oaks Invitational featured 8 three-year-old fillies going 1 3/8 miles over the inner turf for the third leg of the Turf Tiara series. Edisa was sent off as the 8-5 favorite off second place finishes in the Prix de Malleret (G2) at Saint-Cloud and the Prix de Psyche (G3) at Deauville. In to challenge her included 4-1 second choice Love So Deep, second in the Prix de Pomone (G2) at Deauville, and 11-2 third choice Lady Prancealot, 3rd in the Del Mar Oaks (G1). 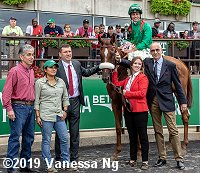 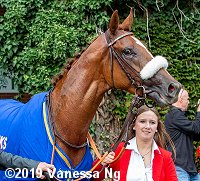 Left: Edisa in the winner's circle. Winning trainer Alain de Royer-Dupre said, "She was able to track early and when she finished late, she was able to come on strong with her quick turn of foot. I preferred the good ground today. I was only concerned if the turf changed from good to soft because she's better on firm. She's well-bred. Her father, Kitten's Joy, is American and the mother is from a great Aga Khan family for long distance. She takes the speed of the father and the staying of the mother, so it was nice to see today."

Right: Edisa returns to the barn after the race. Winning jockey Flavien Prat said, "She broke slow and I was on the inside. I wasn't really happy with where I was, and they slowed down a lot up front. They went at a slow pace, but I'm very happy she really gave me a good turn-of-foot." 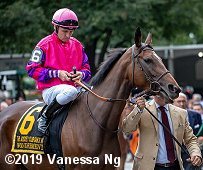 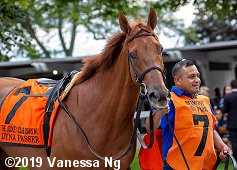 Left: Second place finisher Wonderment heads out of the paddock before the race. Trainer Nicolas Clement said, "It was a good effort. The two French fillies ran one-two, so you can't really ask for a better result than that traveling from Europe. They are both very nice fillies. We had a great trip. She really traveled well. She's owned by a great lady [owner Stella Thayer]. She showed she can come to the U.S. and be competitive in a top race, so we'll go home and see where we go from here. But this was a very good result. We were just unfortunate to not be on top at the finish." 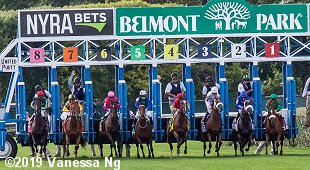 The fillies break from the gate for the Jockey Club Oaks.

Kicking off the Saturday stakes trio was the $300,000 Grand Prix American Jockey Club Invitational Stakes for older horses competing over the Belmont Stakes trip of 1 1/2 miles on the main track. Brooklyn (G2) winner Marconi was sent off as the 7-5 favorite in the field of 6 off his 2nd place finish in the Birdstone Stakes. In to challenge him includd 11-4 second choice Realm, 4th in the Suburban (G2), and 7-2 third choice Rocketry, 3rd in the Birdstone. 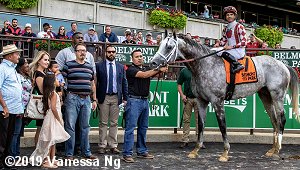 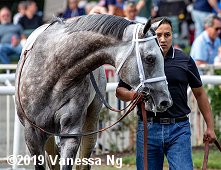 Left: Marconi in the winner's circle. Byron Hughes, assistant to winning trainer Todd Pletcher said, "He seems to like this race course. He didn't break real sharp, but Jose [Lezcano] did a good job of getting him up there and getting him in a comfortable rhythm. It wasn't ideal but when I saw the first fractions in 25 and change, I got a little more comfortable. He was able to pull away there from the group at the top of the stretch and win nicely."

Right: Marconi heads back to the barn. Winning jockey Jose Lezcano said, "My horse broke a little slow. After that, I had to get him where we wanted to be towards the front. The horse inside didn't want to go, so I went to the lead and he stayed the same the whole way around. He got into a good rhythm and once he got going, he was comfortable." 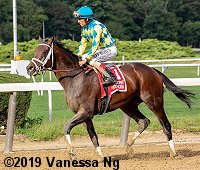 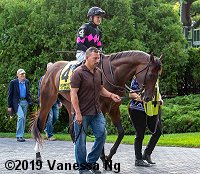 Left: Second place finisher You're to Blame returns after the race. The Todd Pletcher trainee improved his record to 6 wins, 6 seconds, and 4 thirds in 24 starts, earning $649,065 for owner Bortolazzo Stable.

Right: Third place finisher Realm heads out of the paddock before the race. The Barclay Tagg trainee improved his record to 4 wins, 4 seconds, and 8 thirds in 28 starts, earning $503,095 for owners Eric Dattner, Barclay Tagg, and Henru Astarita. 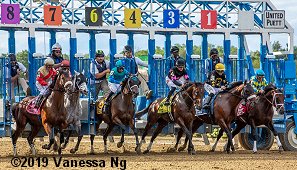 The horses break from the gate for the Grand Prix American Jockey Club Invitational Stakes.