On Saturday afternoon, stakes action continued at Belmont Park with no spectators in attendance due to coronavirus restrictions. Four graded stakes that in recent years were run on Belmont week were instead run a week later. Rain fell with temperatures in the high 70's, but the main track remained fast and the turf courses firm. 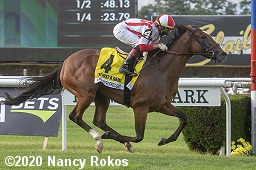 A field of 6 older fillies and mares went 1 mile on the Widener turf course in the $250,000 Just a Game Stakes (G1). Uni was sent off as the even-money choice, unraced since winning the Breeders' Cup Mile (G1). In to challenge her included 11-10 second choice Newspaperofrecord, winner of the Intercontinental (G3), and 10-1 third choice Beau Recall, 9th in the Mint Julep (G3).

Jockey Irad Ortiz Jr. sent Newspaperofrecord to the lead out of the chute through fractions of 23.79, 48.13, and 1:12.22 while pressed by 65-1 longest shot Valedictorian and stalked by 13-1 fourth choice Regal Glory. Turning for home, Newspaperofrecord opened up on the field through 7f in 1:23.42. Beau Recall put in a strog rally from last to no avail as Newspaperofrecord cruised to a 3 length win in 1:35.62. It was another 1/2 length back to favorite Uni third.
Full results chart 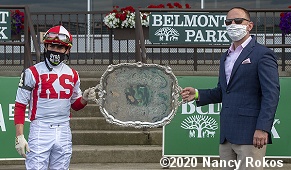 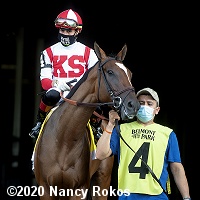 Left: Jockey Irad Ortiz Jr. and trainer Chad Brown with the Just a Game trophy. Ortiz said, "She's doing good and has come back really good. Going 7/8 to a mile is good for her; she can go further, too, and I would not be afraid to go 1 1/16. I just followed Chad's instructions. She came back good and looks healthy and had a really good run. We ended last year a little disappointed, but she came back this year the right way. She's 2-for-2, so hopefully she keeps doing it."

Right: Newspaperofrecord heads out of the tunnel to the track. Winning trainer Chad Brown, celebrating his 4th straight Just a Game win, said, "We trained her lightly and she has been training very relaxed. Last time, she was going really fast and was a little fresh. Irad [Ortiz, Jr.] was confident that he could get her to rate a little bit. I loved our post today, off the fence a little bit. The last-minute showers didn't hurt us either. We all know that she likes a little juice in the ground. It was a good effort after three weeks. I was very proud of her. My team has done a great job with her. She's never looked better. She's training so comfortably in the mornings." 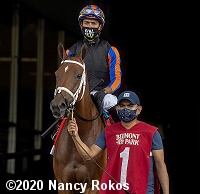 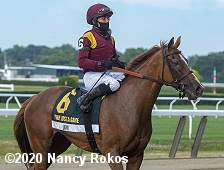 Left: Second place finisher Beau Recall comes out of the tunnel to the track. Jockey Jose Ortiz said, "It was a great effort. I broke OK. She got into a good position and a good rhythm. It's really soft out there. I followed Uni the whole way around there and had a great trip. The winner is just a freak on the soft turf. She loves it."

Right: Third place finisher and beaten favorite Uni returns after the race. Jockey Joel Rosario said, "She went nice around there and I started making my move early. It looked like the pace wasn't fast. I knew there was soft ground. She tried really hard, but today was not her day. I think she needed the race." Trainer Chad Brown added, "Uni has had a few bumps along the road. She needed some extra time off and had a late start. She popped a splint and we had to pull that out; she missed a couple of works. Although she's run OK with some give in the ground, her best races really are on firm turf. Joel came back and said she was out of sorts having to move early off a moderate pace." 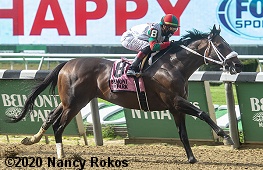 Jockey Dylan Davis sent Yorkton to the lead through fractions of 22.84 and 45.85 while pressed by 6-1 Stan the Man and stalked by Diamond King. Turning for home jockey Irad Ortiz Jr. sent Firenze Fire to lead through 3/4 in 1:09.39. Kept to task by Ortiz, Firenze Fire pulled away to win by 1 1/2 lengths over Stan the Man in 1:15.53. It was another 3 1/4 lengths back to Yorkton third.
Full results chart 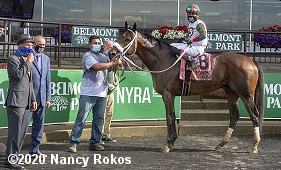 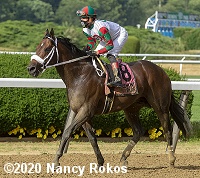 Left: Firenze Fire in the winner's circle. Winning trainer Kelly Breen said, "He's a nice horse. When things click like that, it doesn't get much better than that. For sure, he needed that last race. I think the track had something to do with it last time out. He ran fast. He's run fast races before. Hopefully, we can move onward to Saratoga and find a nice spot for him there. The goal is to get him to the Breeders' Cup."

Right: Firenze Fire returns after the rae. Winning jockey Irad Ortiz Jr. said, "He did everything right. We broke and got into a good position and I was just waiting. Turning for home, I asked him and he responded really well. We were close to the pace, but I just held him together. I didn't want to be fighting, so I just tried to let him relax and he really responded when I asked." 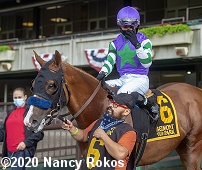 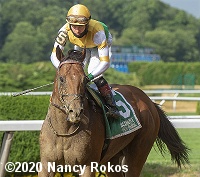 Left: Second place finisher Stan the Man heads out to the track before the race. Jockey Joel Rosario said, "The winner ran big. I can't complain with the result. We had a good trip. We were in good position and he was carrying me nicely. Turning for home, I thought we were going to win but we were just second-best today." 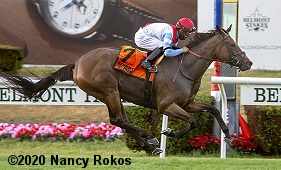 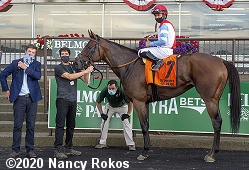 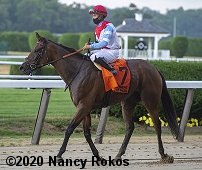 Left: Mean Mary in the winner's circle. Winning trainer Graham Motion said, "You always wonder a little bit about Florida; did she just suit that course? But this is so different than running at Gulfstream. The way she did it was pretty impressive. I worried a little bit. You always worry a little bit with that much time away and I wanted to keep her fresh, but she also had to be fit. The course took a little bit of rain, but it's so different than what she had been running on. I think she might be one of those horses where you don't have to make too many excuses."

Right: Mean Mary returns after the race. Winning jockey Luis Saez said, "I had a lot of confidence in her today. She always does everything right. Today, she was just galloping. The track feels good today and I think the rain helped her. She was super relaxed, even more so than her last race. She feels better now than she did last time." 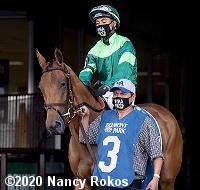 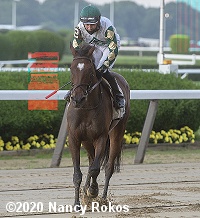 Left: Second place finisher My Sister Nat heads out of the tunnel to the track. The Chad Brown trainee improved her record to 2 wins, 4 seconds, and 3 thirds in 11 starts, earning $259,172 for owner Peter Brant. 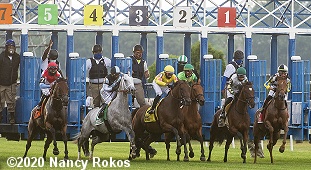 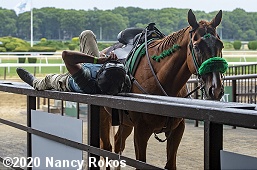 Left: The horses break from the gate for the New York Stakes.

Right: A tired pony boy takes a nap on the rail beside the tunnel under the grandstand. 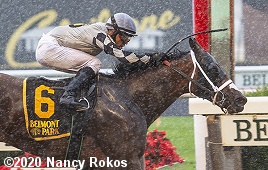 Kicking off the Saturday stakes quartet was the $100,000 Vagrancy Handicap (G3) for older fillies and mares sprinting 6 1/2 furlongs on the main track. Apple Blossom (G1) 12th place finisher Come Dancing was the 9-10 favorite in the field of 6 over 3-2 Royal Charlotte, 2nd in the Harmony Lodge, and 13-2 Chalon, unraced since 4th in the Thoroughbred Club of America (G2) in October.

Jockey Luis Saez sent 15-1 Jakarta to the lead through fractions of 22.47 and 45.49 while pressed by 27-1 longest shot Victim of Love and stalked by Come Dancing. In the stretch Jakarta tired allowing Victim of Love to inherit the front through 6f in 1:09.77. Kept to task by Jose Lezcano, Victim of Love drew off to win by 1 3/4 lengths over Come Dancing in 1:16.27. It was another 4 1/4 lengths back to 16-1 Pacific Gale third.
Full results chart 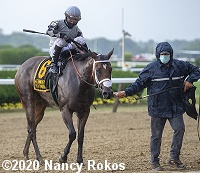 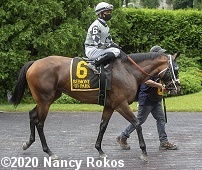 Left: Victim of Love heads to the winner's circle. Winning jockey Jose Lezcano said, "The trainer [Todd Beattie] told me to break and try to keep her busy. She broke a little bit behind, but with a tap on the shoulder, she jumped right there on the bridle. When I asked her, she really took off. My filly kept going the whole way around and never stopped. She gave me everything she had."

Right: Victim of Love leaving the paddock before the race. 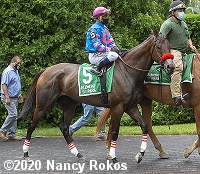 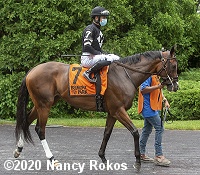 Left: Second place finisher and beaten favorite Come Dancing heads out of the paddock before the race. Jockey Javier Castellano said, "It was her second start of the year. I'm not disappointed. The horse on the lead was much the best today. I think that the track is playing a little bit to speed. The rain didn't bother her at all. I'm looking forward to a big race next time."

Right: Third place finisher Pacific Gale heads out of the paddock before the race. The John Kimmel trainee improved her record to 3 wins, 4 seconds, and 4 thirds in 22 starts, earning $334,040 for owner Tobey Morton.