The $1 million Delta Downs Jackpot Stakes (G3) is the highlight of the racing season at Delta Downs in Vinton, Louisiana. Run at 1 1/16 miles for 2-year-olds, it is a key Triple Crown prep as it is worth 10 points in the "Road to the Kentucky Derby" system now used to determine the Derby field. A full field of 10 went to post on Saturday night, withh Coastline sent off as the 8-5 favorite off his win in the Street Sense Stakes at Churchill Downs. In to challenge him included 2-1 second choice Rise Up, winner of the Jean Lafitte Stakes, the major local prep for the Jackpot, and 6-1 third choice Rankhasprivileges, winner of his debut last out at Keeneland.

Jockey Gerard Melancon sent Rise Up to the lead first time by and he set fractions of 22.82, 46.30, and 1:11.94 over the fast main track while pressed by 24-1 Mighty Brown and 13-2 Casiguapo. Entering the stretch, Rise Up began to pull away from the field, getting 1 mile in 1:38.06, and cruised past the post 6 lengths ahead of Casiguapo in a stakes record time of 1:44.71. It was another 1 3/4 lengths back to late-running Rankhasprivileges third, while favorite Coastline stumbled at the start and checked in 8th. 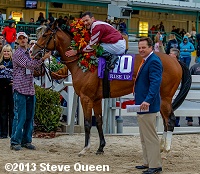 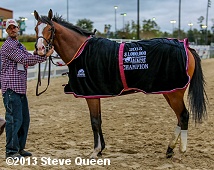 Left: Rise Up in the winner's circle. Trainer Tom Amoss said, "It helped a great deal that he was outside of horses and did not have horses breathing on him. I've been guilty so many times of taking horses with so much tactical speed and making him something he's not, maybe I almost did that today, but Gerard took it out of my hands and let him use his speed correctly and got us the win today. So he gets the gold star."

Right: Rise Up with his winner's blanket. Jockey Gerard Melancon said, "I knew we had a great horse coming out of the 10-hole," Melancon said. "I think going 1 1/16, the 10 hole is really a great spot. I had all kinds of options. I was like, ‘Well I don't want to get hung up in a speed duel with these.' If I'm going to go fast, I'd rather be by myself where maybe I can get a little breather. He came back to me and set his ears straight up and I was like, 'This is where I want you.' Around the turn, I said from here if they beat us, they're going to have to outrun us." Melancon is the only jockey to win the Delta Jackpot twice. 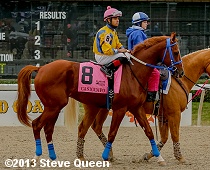 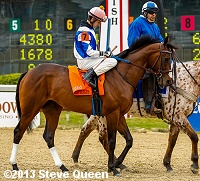 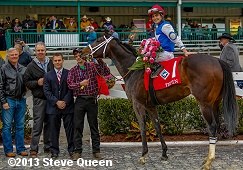 The distaff counterpart to the Jackpot is the $500,000 Delta Downs Princess Stakes (G3) for 2-year-old fillies going 1 mile. Schuylerville (G3) winner Bahnah was sent off as the 2-1 favorite in the field of 7 off her win in the My Trusty Cat Stakes, the major local prep for the Princess. In to challenge her included 5-2 second choice Miss Behaviour, second in the Sharp Cat after winning the Matron (G2), and 3-1 third choice Concave, 9th in the Breeders' Cup Juvenile Fillies (G1). 22-1 Zip On set the pace of 22.90 and 47.50 while pressed by Bahnah and Miss Behaviour. Into the lane, Bahnah took over through 3/4 in 1:12.50, but 7-2 fourth choice Tepin, fourth early, rallied past her to win by 1 1/4 lengths in 1:38.95. It was another 5 1/4 lengths back to Concave third.

Tepin, the 7-2 fourth choice, raced in fourth for the first 3/4 mile under jockey Miguel Mena then put in a long sustained drive for the win. The Mark Casse trainee improved her record to 2 wins, 0 seconds, and 1 third in 4 starts, earning $342,084 for owner Robert Masterson. She also earned 10 points in the Road to the Kentucky Oaks. 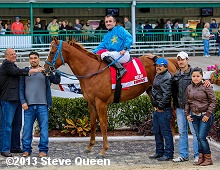 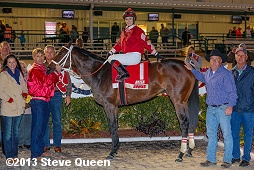 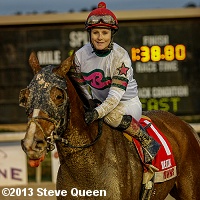 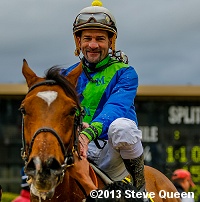 Trainer Tom Amoss said, "This is horse is really athletic. On this kind of racetrack, going a route of ground, an athletic horse can really take advantage on the turns. I thought that's what (jockey) Gerard Melancon did on the racetrack and it worked out great." 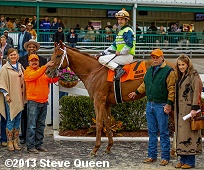 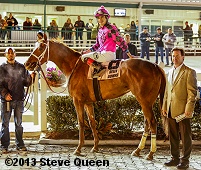