The feature race at Monmouth Park on Saturday was the $200,000 Philip H. Iselin Stakes (G3) for older horses going 1 1/16 miles. Conditions were excellent on the Jersey Shore with sunny skies and temperatures in the high 80's. After Mind Control and Wait for It scratched, just 4 of the originally drawn field of 6 went to post, with Warrior's Charge sent off as the 1-2 favorite off his 2nd place finish in the Metropolitan Handicap (G1). In to challenge him were 9-5 second choice Bal Harbour, 3rd in the Monmouth Cup (G3), 9-2 Pirate's Punch off his 7th place finish in the Stephen Foster (G2),, and 22-1 longest shot Just Whistle, 9th in the Monmouth Cup. 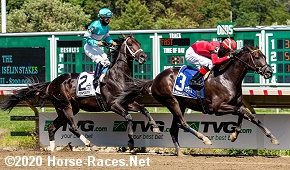 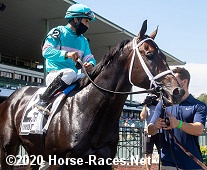 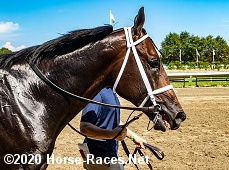 Right: Warrior's Charge heads back to the barn. Winning trainer Brad Cox said, "Paco had the horse where he needed to be, up close or on the lead. Pirate's Punch took off after us and I thought we were able to battle back and get in front of him but I'm not sure he ever did, even though he hung in there with him. Maybe we were going to come back. Obviously the stewards thought we were. We were fortunate to come out on the front end of this." 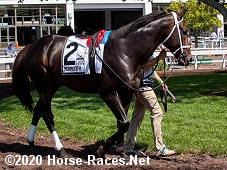 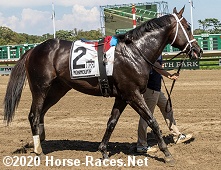 Left: Warrior's Charge in the paddock before the race. Cox added, "He will ship back to Kentucky tomorrow and we'll see how he is. I think we'll look at one more race (before the Breeders' Cup Dirt Mile) but we'll see how he comes out of this first."

Right: Warrior's Charge circles during the inquiry. Lopez added, "I think if had a little room he would have come back to win because he's a fighter. You can see on the head-on how it bothered us and why I had to stop riding. That hole was there and then it closed very quickly when that horse came over on us." 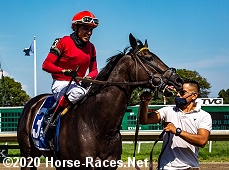 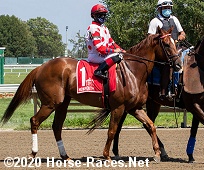 Left: Second place finisher (disqualified from first) Pirate's Punch returns after the race. Owner Phil Bongiovanni did not agree with the DQ, saying, "Paco gets an Academy Award, he was never getting by. Thoroughly disappointing decision but so proud of Pirates Punch and his heart." 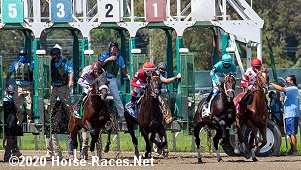 The horses break from the gate for the Iselin Stakes. Cox added, "The horse that crossed the wire first ran a tremendous race. I honestly thought he was a horse to contend with and he obviously was. It's strange, because a couple of more jumps and we're probably third. It was an unfortunate way to win a race, I guess you could say. But we'll take. Now we'll see how he comes out of it."