The feature race at Santa Anita on Sunday was the $100,000 Irish O'Brien Stakes for California bred or sired older fillies and mares sprinting 6 furlongs on the turf. Conditions were excellent again with partly cloudy skies, a firm course, and temperatures in the low 60's. Leggs Galore was sent off as the 6-5 favorite in the field of 7, winner of 4 straight including the Sunshine Millions Filly and Mare Turf Sprint last out. In to challenge her included 8-5 second choice Bella Vita, winner of the Spring Fever Stakes, and 11-2 third choice Sadie Bluegrass, an allowance winner making her stakes debut. 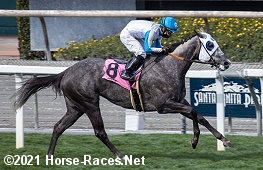 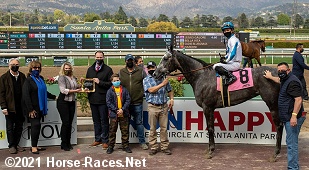 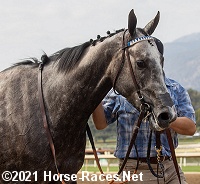 Left: Leggs Galore in the winner's circle. Winning trainer Phil D'Amato said, "This race, she really started to remind me of (2017 winner and multiple stakes winner) Enola Gray the way she won today.I gave Ricky the option. I just told him to play the break, if they wanted to come get her she could rate, she's done it before, but I mean she broke like a rocket and there was no looking back."

Right: Leggs Galore heads back to the barn after the race. 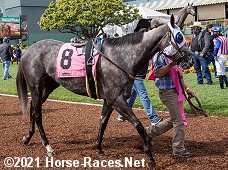 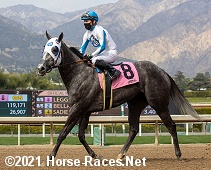 Left: Leggs Galore in the paddock before the race. Winning jockey Ricardo Gonzalez said, "She's just so special, she's so fast and talented. Phil said she's rated before, so I had options but the way she broke there was only one way, just keep going. She was so relaxed, she was looking around, her ears were pricked, just having fun out there. I was just a happy passenger." 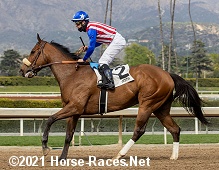 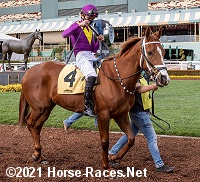 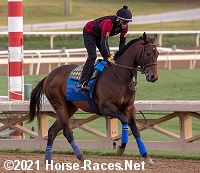 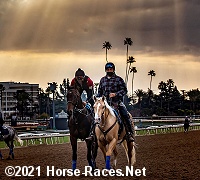 On Sunday morning, undefeated kentucky Derby 7-2 ante-post favorite Life Is Good went out for a routine gallop over the main track at Santa Anita. After winning his debut November 22 at Del Mar, he went on to win the Sham Stakes (G3) at Santa Anita on January 2 and then the San Felipe Stakes (G2) on March 6. He is expected to go next in the April 3 Santa Anita Derby (G1) for his final prep before shipping to Churchill Downs for the Kentucky Derby (G1) on May 1. A day after the San Felipe where he noticeably failed to keep a straight course, trainer Bob Baffert said, "He's still green. Remember Authentic did all that weaving one race, they're still babies. They're still immature. The main thing is he came out of it really well. We saw a lot of raw talent yesterday."