The highlight race in Ireland is the €1.5 million Dubai Duty Free Irish Derby (G1), a 1 1/2 mile turf trip for 3-year-olds around one turn of The Curragh. Conditions were typical for early July, with overcast skies, intermittent showers, and temperatures in the high 60's, with the course rated good-to-yielding. Due to renovations at the historic County Kildare racecourse, attendance was limited to 6,000 and just 5,412 were on hand. As expected, upset winner of the Epsom Derby (G1) Wings of Eagles was sent off as the 3-2 favorite in the field of 9. In to challenge him included 9-5 second choice Waldgeist, runner-up in the Prix du Jockey Club (French Derby-G1), and 7-2 third choice Cracksman, winner of the Derby Trial but 3rd in the Epsom Derby.

Jockey Anastasia O'Brien sent 66-1 The Anvil to the lead to set the pace while pressed by 5-1 Capri and stalked by 16-1 Douglas MacArthur. At the 3/8 pole, jockey Seamie Heffernan asked Capri to challenge for the lead and he took over at the 1/4 pole. Cracksman, 6th early, and Wings of Eagles, 5th early, rallied in the stretch to challenge at the 3/16 but Capri held them off in the drive to win by a neck over Cracksman in 2:35.45. It was a head back to favorite Wings of Eagles third. 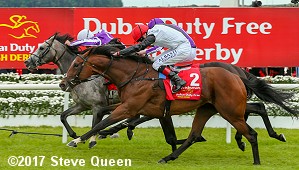 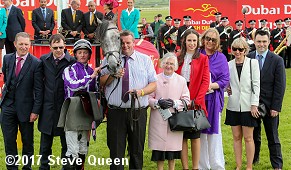 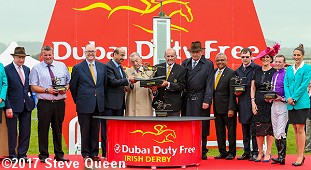 Left: Capri in the winner's enclosure. Winning trainer Aidan O'Brien, celebrating his 12th Irish Derby win, said, "The three-year-olds get sorted to a point at Epsom and then when you want to get these proper 1 1/2 horses there is no track that can do that other than the Curragh. If you have an even pace on there is nowhere to hide. Seamus (Heffernan) rode Capri in Epsom and he was very happy with him and looking forward to coming here with him. It's the ultimate test over 1 1/2 for a 3-year-old colt. The French form (Criterium De Saint-Cloud) was there from last year, and John's (Gosden) horse was the only one that wasn't there. All the right horses lined up at the furlong marker, and there was nowhere to hide. What (Heffernan) did today wasn't an easy thing to do. The pace was strong up front, and he was sitting right in the eye of the storm. He had a choice how close he followed it or not to follow it, and he knew all the fancied horses were behind him. It was a masterclass from him really."

Right: The trophy presentation for the Irish Derby. 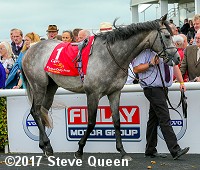 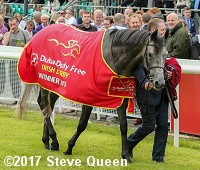 Left: Capri in the walking ring before the race. Winning jockey Seamie Heffernan, celebrating his 3rd Irish Derby, said, "This horse has been competing in very good races all year and the Curragh suited him. I was always comfortable in my position and we went a good gallop. He galloped all the way to the line. He stays well and tries hard. At Epsom I was planning to be a little bit closer, but being the track it is, I didn't jump and couldn't be that bit closer. I had to move a little bit earlier than ideal and I still ran very well. It's great that he looks like he's improving. The Epsom Derby is the clash of the best around and what runs in that race usually split up and win the best races around."

Right: Capri heads back to the barn in his new winner's blanket. 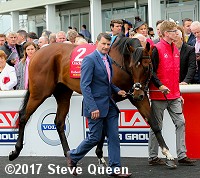 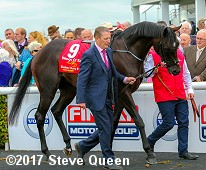 Left: Second place finisher Cracksman in the walking ring. Jockey Pat Smullen said, "He ran an excellent race. He got a little bit further back than we had planned but he never really travelled through the race and showed a lot of immaturity still. He's very babyish. It wasn't ideal to have to come around one in the straight but I just wasn't going well enough. To his credit, he got it together and stayed on very well to the line. I thought when I got the better of Wings Of Eagles I had it, but the grey horse battled away well. He's run an excellent race. It's unfortunate he's got beat, but he's a horse that will only keep progressing from here on."

Right: Third place finisher and beaten favorite Wings of Eagles in the walking ring. Unfortunately he was found lame after the race and was diagnosed with a fracture in his left front sesamoid, and was immediately retired. Trainer Aidan O'Brien said, "We're very lucky that it didn't come apart during the race. You're always worried when they pull out in the morning and when he pulled out, he was very sore. When he was x-rayed, his sesamoid was coming apart. It's incredible that he ran the race that he did really. We're very sorry to lose him, he was an unusual horse who stayed very well but quickened very well. When John (Magnier, co-owner) saw the x-ray, there was absolutely no chance that he would ever race again and I think he might have a pin put in it on Monday. I was speaking to (Magnier) on the way home last night and saying that he was a perfect horse to have a midsummer break and then give him a prep for the Arc, that's the type of horse that we thought he was going to be."

Immediately before the Derby, a field of 8 two-year-olds (after 1 scratch) contested the €115,000 GAIN Railway Stakes (G2) at 6 furlongs on the turf. Murillo was sent off as the even money choice off his close 3rd in the Coventry Stakes (G2) at Royal Ascot. In to challenge him included 5-2 second choice Verbal Dexterity, a debut winner by 9 lengths on June 10 last out at Curragh, and 5-1 Beckford, winner of his debut also at Curragh by 1 3/4 lengths on May 13.

Murillo and Verbal Dexterity dueled for the lead for the first 3f while stalked by Beckford and 11-1 True Blue Moon. At the 3/16 pole jockey Declan McDonogh sent Beckford to the front. Verbal Dexterity attempted to close late but Beckford easily held him off by 1 length for the win in 1:11.71. It was another 1 1/4 length back to favorite Murillo third. 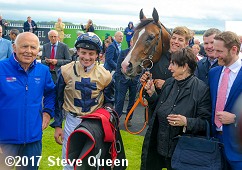 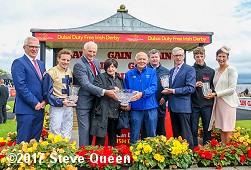 Winning trainer Gordon Elliott, celebrating his first Group winner on the flat, said, "We thought he'd improved a good bit from the last day. I haven't got enough of them to know but we liked what we were seeing. We thought he was working well but we haven't got anything to work him with. He's good, a fair horse. He was probably in front plenty soon enough but he's tough and he stays. When you win you are always good but in fairness Declan is a big part of all these two-year-olds, where we work and what we do, so I'm delighted for him. The Phoenix Stakes is where he'll go now all being well. Jumps is my number one, nothing else matters to me other than National Hunt racing. This is a bit of fun for the summer, it fills a gap. I'm not going to get ahead of myself – I've got some great jumps owners" 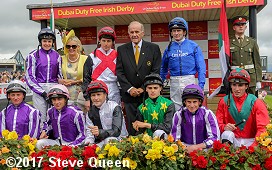 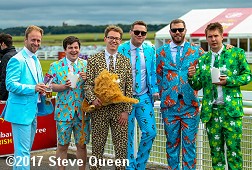 Right: Some fans at the Irish Derby in wacky suits. 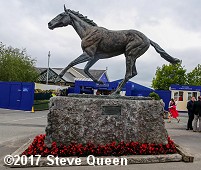 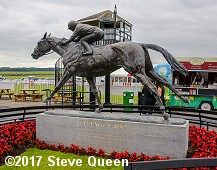 Left: The statue of Ridgewood Pearl at the Curragh. She won the 1995 Breeders' Cup Mile at Belmont Park among other Grade 1 races.

Right: The statue of Vintage Crop at the Curragh. He was the first overseas runner to win the Melbourne Cup in 1993. 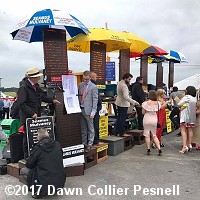 Left: Bookie kiosks at the Curragh, not drawing much traffic due to the reduced attendance. Fans can tour the various bookmakers to find the highest offered odds for the horse(s) they want to bet on, and have those odds locked in when the bet is placed. This is in contrast to the parimutuel (tote) system used in most places including North America, where odds are not fixed and are calculated after the pool is closed. In Ireland the minimum bet on the Tote is €1 while at most on-course bookmakers the minimum is €5.

Right: Hayley Keogh from Newbridge was selected to sing "Curragh of Kildare" with the Army Band at the trophy presentation for the Irish Derby.