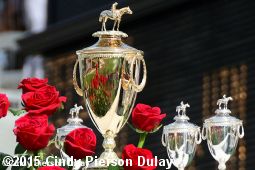 In the United States, the Kentucky Derby is widely considered the premier horseracing event of the year. With the usual Yankee hyperbole, the race is often referred to as either the Most Exciting Two Minutes in Sports or as the Fastest Two Minutes in Sports. It is also often called “The Run for the Roses,” due to the rose-covered blanket that is thrown over the winning horse.

The 2017 Kentucky Derby is sponsored by YUM! Brands; it is a Grade 1 race, for three-year-old thoroughbreds, who run a distance of one-and-a-quarter miles at the famed Churchill Downs racetrack in Louisville, Kentucky. This year - the 143rd running of the Kentucky Derby, with $2 million guaranteed - the race will take place on Saturday, May 6, 2017. Last year’s Kentucky Derby was won by Nyquist, in a particularly fast time of 2:01.31.

Only the Best Get to the Derby

Every year, 20 horses compete in the Kentucky Derby, and, as in the last four years, a tiered point system is in place to choose the horses that qualify. To win a spot in the race, horses must negotiate what is known as The Road to the Kentucky Derby, a series of races that take place at racetracks across the United States and at venues around the world. (Points are given to the first four finishers in each race.) The “road” started in September 2016 at the Iroquois race at Churchill Downs and culminated at the Lexington race at the Keeneland track on April 15, 2017.

With the final qualifying race behind us, the points standing ahead of the Kentucky Derby is as follows:

The Kentucky Derby is the first race is the famed Triple Crown, a series of three horse races for three-year-olds that take place annually in May and June.  Only 12 horses in history have won the Triple Crown, which is not surprising considering the difficulty of the achievement: winning the Kentucky Derby; two weeks later winning the Preakness Stakes (at Pimlico Race Course in Baltimore, Maryland); and three weeks later winning the Belmont Stakes (at Belmont Park in Elmont, New York). Nonetheless, two years ago the brilliant American Pharoah, with jockey Victor Espinoza, took the Triple Crown – the first time in 37 years.

William Hill: For All Your Kentucky Derby Betting

As with all major sporting events – in the United States and around the world – William Hill, the experienced and reputable UK-based online sports betting site, offers great odds for those eager to get a piece of the Kentucky Derby action. The site is user-friendly and easy to navigate, and a bet on the fastest two minutes in sports is just a few-second click away.