The feature race on Friday at Del Mar was the $100,000 I'm Smokin Stakes for Golden State Series-eligible California-bred or sired 2-year-old going six furlongs on the main track. Conditions were typical for the seaside track in early September with sunny skies and temperatures in the mid 70's. After 6 of the originally drawn field of 10 scratched out of the race, just 4 went to post with Graduation Stakes runner-up Good With People sent off as the 9-10 favorite. In to challenge him were 2-1 Touchdown Brown, 7th in the Graduation, 7-2 Tacoflavoredkisses, a maiden winner last out, and 9-2 Pappy Boyington, a debut winner last out. 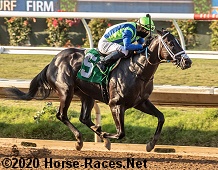 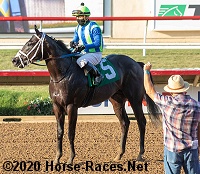 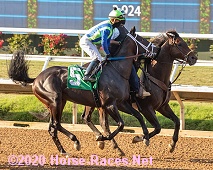 Left: Good With People in the winner's circle. Winning trainer Peter Miller said, "We took the blinkers off and I think that made the big difference. He was a little too aggressive last time with the blinkers and he couldn't see the horses coming at the end. We worked him without the blinkers and he did really well. And Abel (Cedillo) did a good job. It got a little close at the end. He looked like a winner last time, too, at the eighth pole and the 16th pole, so I wasn't counting my eggs before they were hatched."

Right: Good With People in the post parade. Winning jockey Abel Cedillo said, "The last time I rode him (Graduation Stakes August 2), we had an easy lead and he got real tired. I suggested to Peter that we take the blinkers off to help him relax. That's just how it worked today. We went to the front, but he did it easily. He had enough late this time to get the job done." 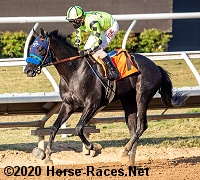 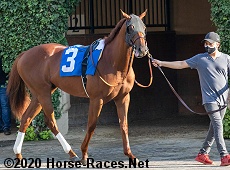 Right: Third place finisher Tacoflavoredkisses in the paddock before the race. The Simon Callaghan trainee improved his record to 1 wins, 0 seconds, and 1 third in 3 starts, earning $48,000 for owners Jason Litt and Alex Solis.