On Friday, some of the best female sprinters of the east met up in the Grade 2 Honorable Miss Handicap at Saratoga. A field of eight faced the starter in this six-furlong event for a purse of $150,000. Bank Audit was sent off as the lukewarm 5-2 favorite, with Ebony Breeze at near 3-1 and Steve Asmussen trainee Forest Music the 4-1 third choice. Going into the race, Asmussen had 2,999 career wins.

When the gate opened, John Velazquez sent Forest Music straight to the front, breaking from the far outside post, with 28-1 longest shot Umpateedle stalking her on the inside. After an initial quarter in 21.80 and a half in 44.43, Forest Music was 2 1/2 lengths clear of the field. Rounding the turn, Jerry Bailey asked Ebony Breeze for her run after settling back in fifth earlier. But by mid-stretch, Forest Music was some 6 lengths ahead leaving Ebony Breeze with too much to do. The margin of victory was 2 lengths at the line, the 6 furlongs completed in 1:10.06 over a fast main track. It was a long 4 1/2 lengths back to favored Bank Audit in third, who was outrun early and had to rally from 7th at the top of the stretch. 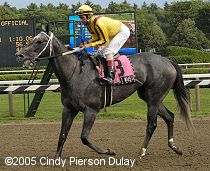 Forest Music returns after the race. Winning jockey John Velazquez said, "She seems like she's walking. They told me she is really fast. She was so calm, I was a little concerned about it. I kept her quiet. When the doors opened, she was gone. When I asked her, she went on again." 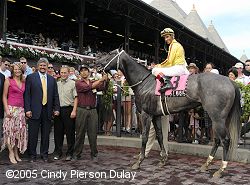 Forest Music in the winner's circle with her connections. Trainer Steve Asmussen, on accomplishing the feat of 3,000 career wins, said, "It is extra significant to win it (3,000 victories) in a stakes race at Saratoga with a filly like this. It is kind of how the career evolved, when there is a filly like this that the owner paid so much money for and moved into my barn. There is no success without that opportunity. Needless to say, I'm pleased that they (owners Stonestreet Stable) let us train her. She acted extremely well today and it was a sign of things to come."

Asked about Forest Music's run, Asmussen said, "She broke well, got away well and relaxed the last eighth of a mile. When (jockey John Velazquez) dropped her head to clear, he had to make the choice to go for the lead or relax her. When they were getting down to the turn, I was much happier to see her where she was than five-wide." 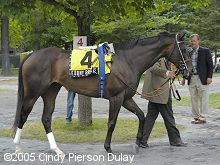 Second place finisher Ebony Breeze in the paddock before the race with her trainer Bill Mott looking on. 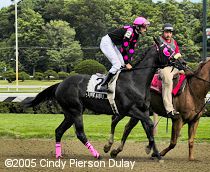