The feature race at Oaklawn on Saturday was the $150,000 Honeybee Stakes (G3) for 3-year-old fillies going 1 1/16 miles, and is a points-scoring event in the Kentucky Oaks Championship Series. A field of 11 faced the starter before 19,187 fans in attendance under overcast skies and temperatures in the mid 60's. Taris was sent off as the 9-5 favorite, undefeated in 2 starts including the Wide Country Stakes at Laurel. In to challenge her included 5-2 second choice Please Explain, winner of the Suncoast Stakes at Tampa Bay Downs, and 7-1 third choice Sugar Shock, making her stakes debut after consecutive wins at Oaklawn.

Jockey Clinton Potts sent Taris to the lead first time by and she set fractions of 23.10, 47.06, and 1:12.10 over the fast track while pressed by Sugar Shock to her outside. Entering the stretch, Taris tired allowing Sugar Shock to inherit a 2 1/2 length lead through 1 mile in 1:38.98. 9-1 fourth choice Euphrosyne, who stalked the pacesetters in third early, moved up to challenge, but Sugar Shock lugged out suddenly at the 1/8 pole causing Euphrosyne to check. Completing the duel to the line, Sugar Shock outfinished Euphrosyne to finish a neck in front in 1:45.68. It was another 3/4 length back to late-running Please Explain third. Jockey Ricardo Santana Jr. aboard Euphrosyne claimed foul against Channing Hill aboard Sugar Shock, and the claim was allowed by the stewards. Sugar Shock was disqualified and placed second, behind official winner Euphrosyne. 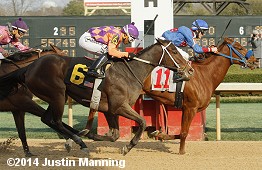 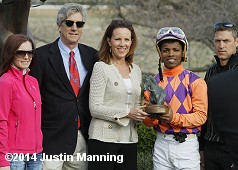 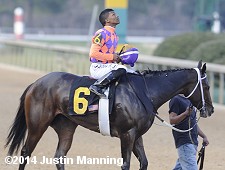 Right: The trophy presentation for the Honeybee Stakes. Darren Fleming, assistant to winning trainer Steve Asmussen said, I thought we got interfered with, but I also thought she would’ve won anyway if that wouldn’t have happened. I’m happy it came out our way. I feel bad and it’s unfortunate for Doug, he’s a nice guy. As far as the Fantasy, that’ll be up to Steve and the owners." 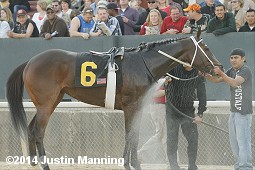 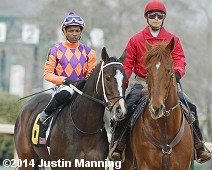 Left: Euphrosyne gets hosed off after the race.

Right: Euphrosyne in the post parade. Winning jockey Ricardo Santana Jr. said, "Every time she goes out there she runs a big race. She’s a good one." 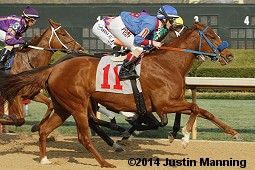 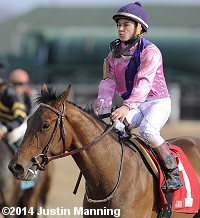 Right: Third place finisher Please Explain returns after the race. Jockey Drayden Van Dyke said, "I was on the rail the whole way and it got tight a little bit near the quarter. Down the lane she (Sugar Shock) stopped my momentum totally." Van Dyke had also claimed foul against Sugar Shock for interference but his claim was disallowed. 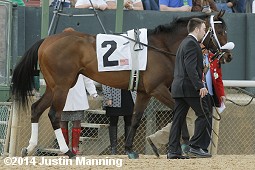 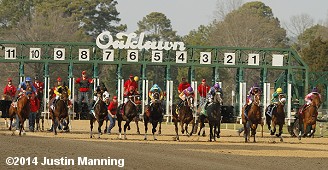 Left: Beaten favorite and 6th place finisher Taris heads over to the paddock before the race. His jockey Clinton Potts said, "Things started out well. She made the lead all on her own and was running the way she likes to. Down the backside, I was thinking 'we have this.' When the other horse (Sugar Shock) came at her at the 3/8ths pole, she just blew right by her. She’s a better horse than that."

Right: The horses break from the gate for the Honeybee Stakes. 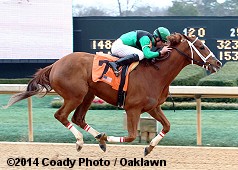 Winning jockey Chris Emigh said, "This is a big horse and he’s on the next level. He seems like he’s in slow motion because his stride is so big and he covers so much ground. With the King Cotton winner in there and the horse that ran second, I knew they’d be flying. I tried to get away turning for home, I asked him and I thought he had a lot." Trainer Roger Brueggeman added, "That’s just the way he likes to run. He has natural speed, so you have to use it."