The feature race on Thanksgiving Friday at Del Mar was the $250,000 Hollywood Turf Cup (G2) for older horses going 1 1/2 miles around 3 turns of the Jimmy Durante turf course. Conditions were excellent at the seaside oval with sunny skies and temperatures in the low 70's for the 4,035 fans in attendance. Joe Hirsch Turf Classic (G1) winner Rockemperor was sent off as the 4-5 favorite in the field of 7 off his 8th place finish in the Breeders' Cup Turf (G1). In to challenge him included 3-1 second choice Friar's Road, third in the John Henry Turf Championship (G2), and 11-2 third choice Say the Word, winless since the Elkhorn (G2) in April and 5th in the Del Mar Handicap (G2) last out.

Jockey Ricardo Gonzalez sent 10-1 fourth choice Acclimate to the lead around all 3 turns through fractions of 23.98, 49.00, 1:13.65, and 1:38.68 while pressed by 20-1 Award Winner and stalked by 36-1 longest shot Cupid's Claws. Turning for home, Acclimate continued to lead through 10f in 2:03.98 but Say the Word, last for the first 11 furlongs, came out to the center of the course and unleashed a strong rally under Kent Desormeaux to win by a length over Acclimate in 2:27.62. It was a neck back to late-running Friar's Road third. Favorite Rockemperor sat 5th early under Flavien Prat but did not rally finishing fifth beaten 1 1/2 lengths. 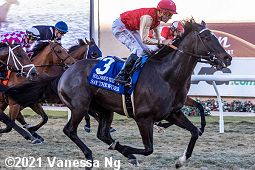 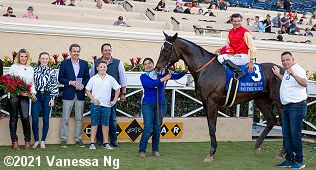 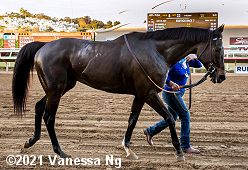 Left: Say the Word in the winner's circle. Winning trainer Phil D'Amato said, "This horse has had so much trouble before this; it was great to see him win. Kent did like he said he would and kept him covered up, then go him clear in the stretch and let him stretch his legs."

Right: Say the Word heads back to the barn after the race. This was the first Hollywood Turf Cup win for both trainer Phil D'Amato and jockey Kent Desormeaux. 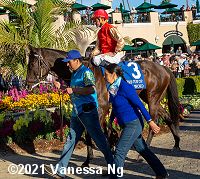 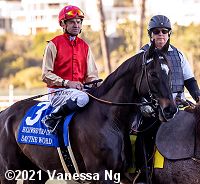 Left: Say the Word in the paddock before the race. Winning jockey Kent Desormeaux said, "I've got to give Phil (D'Amato) the credit for this one. He told me it was hard to get this horse to settle, so I told him I'd do the European thing: I'd put him up some horse's rear (force him to stay in position) and wait until the end."

Right: Say the Word in the post parade. Desormeaux added, "My peers always ask me who's my star and what that means is I'll put a star by the horse that I think will carry me 70 yards from the wire. And Umby (Umberto Rispoli) had the star today (Friar's Road)." 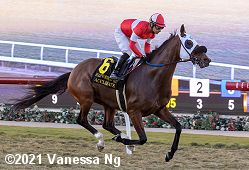 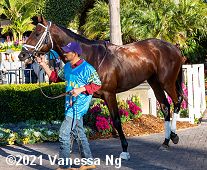 Right: Third place finisher Friar's Road in the paddock before the race. The Mike McCarthy trainee improved his record to 2 wins, 3 seconds, and 2 thirds in 1 starts, earning $171,500 for owners Mr. and Mrs. William K. Warren Jr. 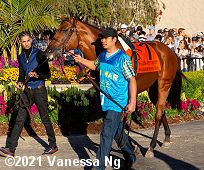 Fifth place finisher and beaten favorite Rockemperor in the paddock before the race. The Chad Brown trainee has a record of 4 wins, 5 seconds, and 6 thirds in 22 starts, earning $959,404 for owners Madaket Stables, Michael Dubb, Wonder Stables, Michael Kisber, and Michael Caruso.