The feature race on Thanksgiving Friday at Del Mar was the $200,000 Hollywood Turf Cup (G2) for older horses going 1 1/2 miles around 3 turns of the Jimmy Durante turf course. Conditions were excellent at the seaside oval with sunny skies and temperatures in the mid 60's and firm going. Kentucky Turf Cup (G3) winner Arklow was sent off as the 9-5 favorite in the field of 12 off his 6th place finish in the Breeders' Cup Turf (G1). In to challenge him included 5-2 second choice Laccario, 2nd in the Joe Hirsch Turf Classic (G1) after finishing 7th in the Preis von Europa (G1), and 13-2 third choice Say the Word, winner of the Northern Dancer Turf (G1). 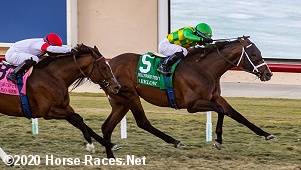 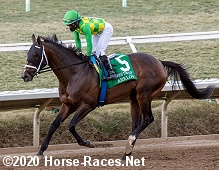 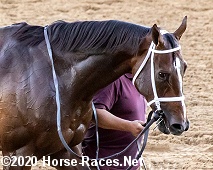 Left: Arklow in the winner's circle. Blake Cox, son of and assistant to winning trainer Brad Cox said, "It kind of worked out the way we had drawn it up. Joel (Rosario) was able to get a real good stalking position and then finish strong. What’s next will be up to Jerry Crawford and Donegal Racing, but I wouldn’t be surprised if the Pegasus World Cup Turf is on the radar."

Right: Arklow in the paddock. 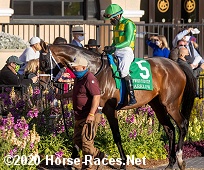 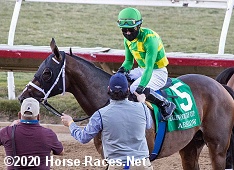 Left: Arklow. Winning jockey Joel Rosario said, "He broke well and we got a good spot. I stepped on the brakes a little bit because I was comfortable where we were. I saved ground with him, then moved up a little bit outside. I could tell we were going slow so I felt OK being closer with him. He was running good. When we turned for home, I knew he was a fighter and I knew he’s be tough to beat. He finished strong. He’s a good horse." 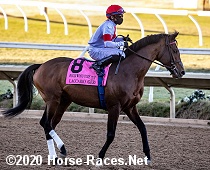 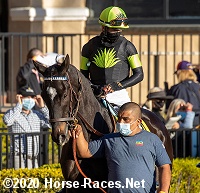 Left: Second place finisher Laccario in the paddock before the race. The Graham Motion trainee improved his record to 4 wins, 4 seconds, and 1 third in 10 starts, earning $634,228 for owner Mandred Ostermann.