The feature race on Saturday of closing weekend at Del Mar was the $400,000 Hollywood Derby (G1) for three-year-olds going 1 1/8 miles on the Jimmy Durante turf course. Conditions were typical for late November at the seaside oval, with sunny skies and temperatures in the low 70's, the main track rated fast and the turf going firm. Public Sector was sent off as the 9-5 favorite in the full field of 14 off a three race win streak including the Hall of Fame (G2), Saranac (G3), and Hill Prince (G2) all in New York. In to challenge him included 4-1 second choice Subconscious, winner of the Twilight Derby (G2), and 7-1 third choice Cathkin Peak, second in the Twilight Derby after finishing fourth in the Del Mar Derby (G2).

Jockey Kent Desormeaux sent 11-1 Beyond Brilliant to the lead out of the infield chute and first time by through fractions of 23.96, 49.23, and 1:13.62 while pressed by 17-2 fourth choice Team Merchants and stalked by Subconscious and Cathkin Peak. Turning for home, Beyond Brilliant opened up a 2 length lead through 1 mile in 1:36.96. 18-1 Santin, 6th early under Umberto Rispoli, came out 4 wide for his rally but Beyond Brilliant held him off to win by a neck in 1:48.84. It was another 1 1/4 lengths back to Cathkin Peak third, and a head more to favorite Public Sector fourth. 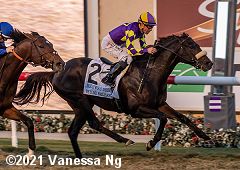 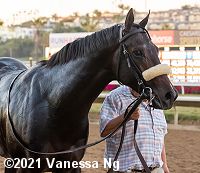 Left: Beyond Brilliant in the winner's circle. Winning trainer John Shirreffs said, "This horse likes to be on the lead or close to the lead and obviously with a big field that’s a good place to be. And Kent Desormeaux is riding great right now, isn’t he? I’m gonna put Kent on more horses he’s riding so well. I’m thankful for him doing it for us today."

Right: Beyond Brilliant heads back to the barn. 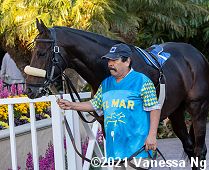 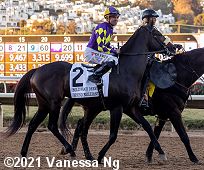 Left: Beyond Brilliant in the paddock. Winning jockey Kent Desormeaux said, "All credit for this win goes to the barn. They’ve done wonders with this horse over the past month. When I rode him last time (October 31 at Santa Anita), he was a handful to control. Today he was easy. He was dry as a bone in the paddock and he was happy out on the racetrack. His mind was right. And he showed he can sprint that last part. 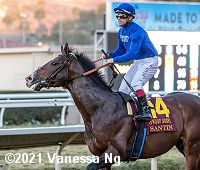 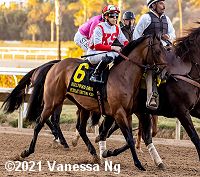 Left: Second place finisher Santin returns after the race. The Brendan Walsh trainee improved his record to 2 wins and 1 second in 3 starts, earning $152,000 for owner-breeder Godolphin. 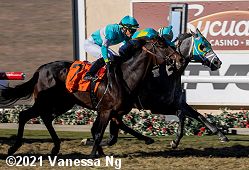 Kicking off the Saturday stakes trio was the $250,000 Seabiscuit Handicap (G2) for older horses going 1 1/16 miles on the turf. Knickerbocker Stakes (G3) winner Sacred Life was sent off as the 9-10 favorite in the field of 7. In to challenge him included 3-1 second choice Flop Shot off consecutive second place finishes in allowance company, and 7-2 third choice Field Pass, winner of the Baltimore Washington International Turf Cup (G3) but a close second in the Knickerbocker.

Jockey Edwin Maldonado sent 43-1 longest shot Lambeau to the lead first time by through fractions of 23.77 and 48.19 while stalked by Flop Shot and 7-1 fourth choice Bob and Jackie. Turning for home Lambeau tired badly and was eased, as Field pass, 5th early under Umberto Rispoli, came out 3 wide to sweep to the front through 3/4 in 1:12.26 and 1 mile in 1:36.02. Sacred Life put in a strong 4 wide rally from 6th but Field Pass held him off to win by a head in 1:41.85. It was another 3/4 length back to 28-1 Indian Peak third.
Full results chart from DRF 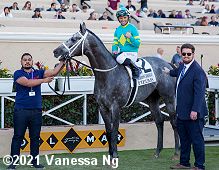 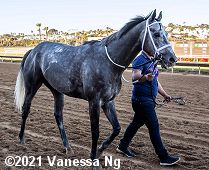 Left: Field Pass in the winner's circle. Nolan Ramsey, assistant to winning trainer Mike Maker said, "He (Rispoli) made that move yesterday (winning) on Red Storm Risen and they went 48 to the half so I figured clearly he knew more than I did. He’s one of those horses that once you make the move there’s no turning back. He’s a classy horse who has gotten the job done in a lot of places and I’m very proud of him."

Right: Field Pass heads back to the barn. Winning jockey Umberto Rispoli said, "I didn’t want to stop the stride of my horse. (He made an early run when he cut his mount loose in the middle of the backstretch.) He was running happy and I was happy, too. He fought hard late and we got there first." 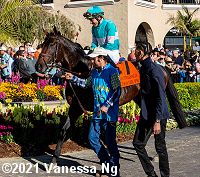 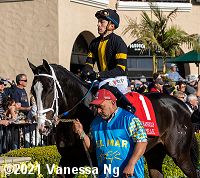 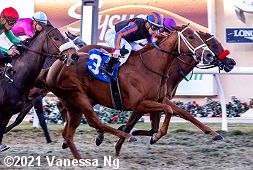 The $100,000 Jimmy Durante Stakes (G3) featured a field of 11 two-year-old fillies going 1 mile on the turf. Breeders' Cup Juvenile Fillies Turf (G1) 8th place finisher Helens Well was sent off as the 2-1 favorite over 3-1 second choice Tezzaray, a maiden winner at third asking, and 4-1 third choice Sparkle Blu, an allowance winner last out after finishing 4th in the Selima Stakes.

Jockey Juan Hernandez sent 18-1 Liam's Dove loose on the lead first time by through fractions of 23.41, 48.52, and 1:13.32 while pressed by 15-2 fourth choice Awake at Midnyte and stalked by 61-1 longest shot Half Past Twelve. Trning for home, Liam's Dove continued to lead through 7f in 1:25.48 but yielded late. Tezzaray, 4th early under Irad Ortiz Jr., came out 2 wide for room and won in a photo finish over Awake at Midnyte in 1:37.56. It was another 1/2 length back to 46-1 Toeris third, and another head back to favorite Helens Well fourth.
Full results chart from DRF 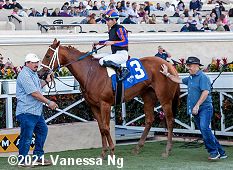 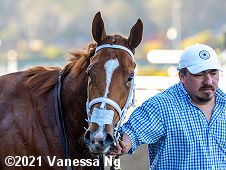 Left: Tezzaray in the winner's circle. Winning trainer Peter Miller said, "I had confidence in her. She’s one of those fillies that are very classy and does everything right. I thought we won, then I thought we didn’t, but luckily we got the head bob. I thought all three of my fillies ran very well and all got great rides. Irad had a really clean trip and once he got her in the clear she really kicked home."

Right: Tezzaray heads back to the barn. Winning jockey Irad Ortiz Jr. said, "I had a good trip. I was in a little tight at the three-eighth pole, but that wasn’t anything big. She’s a very European filly; she likes to run covered up. When it came time to run – boom – she went." 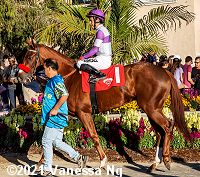 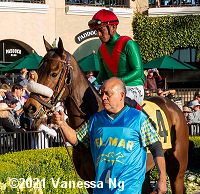 Left: Second place finisher Awake At Midnyte in the paddock before the race. The Doug O'Neill trainee improved her record to 1 win and 1 second in 2 starts, earning $56,600 for owner Reddam Racing. 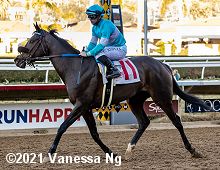