The feature race on Saturday of closing weekend at Del Mar was the $300,000 Hollywood Derby (G1) for three-year-olds going 1 1/8 miles on the Jimmy Durante turf course. Conditions were typical for late November at the seaside oval, with sunny skies and temperatures in the low 70's, the main track rated fast and the turf going firm. Twilight Derby (G2) winner Smooth Like Strait was sent off as the 11-4 favorite in the field of 11. In to challenge him included 3-1 second choice Gufo, winner of the Belmont Derby Invitational (G1), and 4-1 third choice Domestic Spending, winner of the Saratoga Derby Invitational.

Jockey Mike Smith sent 30-1 Get Smokin to the lead exiting the chute through fractions of 23.87, 48.28, and 1:12.38 while pressed by Smooth Like Strait and stalked by 13-1 Scarto. Entering the lane Get Smokin continued to lead through 1 mile in 1:35.79 before tiring, allowing Smooth Like Strait to inherit the lead inside the 1/8 pole. Domestic Spending, 10th early under Irad Ortiz Jr., came out 4 wide for room and rallied to win by a head over Smooth Like Strait in 1:47.15. It was a neck back to late-running Gufo third. 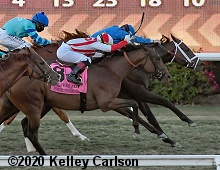 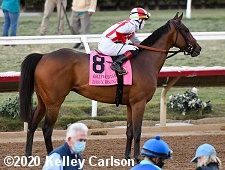 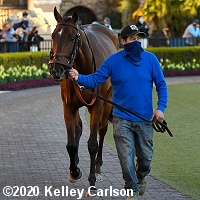 Left: Domestic Spending in the winner's circle. Jose Hernandez, assistant to winning trainer Chad Brown said, "Three down, one more to go. (Brown has three stakes wins this week at Del Mar, 1 more for Matriarch on Sunday.) I talked to Chad coming over to the paddock and he just said stay with the plan. He broke a little slow but he was in good position and at about the half-mile point he started picking it up and by then I knew he was going to be there at the end. He's a really good horse. "

Right: Domestic Spending in the paddock. Winning jockey Irad Ortiz Jr. said, "I thought I was going to be closer with him but he came out of there a little slow and we were in the back. I worked my way up on the backside and he was running perfect. When I asked him for his run at the three eighths (pole), he was ready. He really put in a nice kick. He's been a little green in his earlier races but he's getting better all the time." 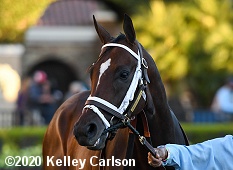 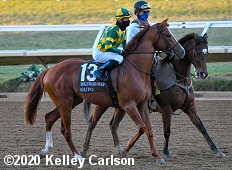 Left: Second place finisher and beaten favorite Smooth Like Strait in the paddock before the race. The Mike McCarthy trainee improved his record to 5 wins, 2 seconds, and 1 third in 11 starts, earning $457,823 for owner-breeder Cannon Thoroughbreds. 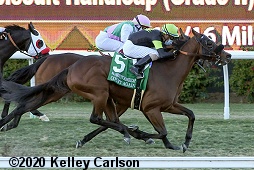 Anothertwistafate and One Bad Boy dueled for the lead out of the chute and around the clubhouse turn through fractions of 24.03 and 48.27 while stalked by 15-1 Blitzkrieg. On the far turn One Bad Boy was eased by jockey Flavien Prat, as Blitzkrieg opened up a 2 length advantage through 3/4 in 1:12.02. Turning for home Blitzkrieg continued to lead to midstretch through 1 mile in 1:35.31 before tiring. 8-1 fourth choice Count Again, last early under Juan Hernandez, came out 5 wide for room and outfinished fellow closer Flavius by 3/4 length in a stakes record 1:40.84. It was another 3/4 length back to 20-1 Next Shares third, and another length to favorite Anothertwistafate fourth.
Full results chart from DRF 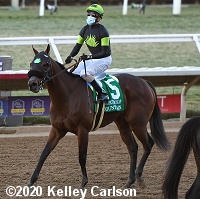 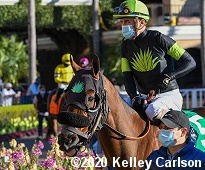 Left: Count Again returns after the race. Winning trainer Phil D'Amato said, "(Previous trainer) Gail Cox delivered this horse to me in excellent condition and I was really glad to have him. She got him going really good and his confidence up as well and I just kind of trained on from that. I'm just fortunate to have him. Juan (jockey Hernandez) followed our plan. I just told him to save all the ground and come with one run. If the race sets up for us, great, if not we'll stretch him out next time. He followed those instructions to a 'T' and he came with a monstrous run. "

Right: Count Again in the paddock. Winning jockey Juan Hernandez said, "He'd been running longer races (10 and 12 furlongs) and when he broke a little slow today I didn't rush him. We were in a good spot on the backside and I could feel I had plenty of horse. When we hit the three-eighths (pole) I wheeled him outside and we started to pick them up. He ran hard through the stretch and we got it done." 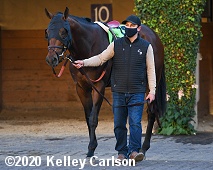 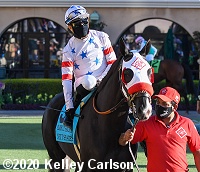 Left: Second place finisher Flavius in the paddock before the race. The Chad Brown trainee improved his record to 3 wins, 2 seconds, and 1 third in 9 starts, earnng $581,151 for owner-breeder Juddmonte Farms. 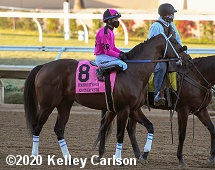 Fourth place finisher and beaten favorite Anothertwistafate in the post parade. The Peter Miller trainee has a record of 4 wins, 2 seconds, and 0 third in 9 starts, earning $370,505 for owner Peter Redekop B.C. Ltd. 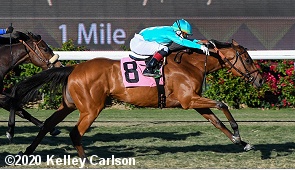 Kicking off the Saturday stakes trio was the $100,000 Jimmy Durante Stakes (G3) for 2-year-old fillies going 1 mile on the turf. Selima Stakes winner Fluffy Socks was sent off as the 8-5 favorite in the field of 10 off her 2nd place finish in the Chelsey Flower Stakes. In to challenge her included 5-2 second choice Pizzazz, a maiden winner last out after finishing 3rd in the Surfer Girl, and 9-2 third choice Javanica, second in the Glorious Song at Woodbine.

Jockey Juan Hernandez sent 14-1 Plum Sexy to the lead first time by through fractions of 22.71, 47.00, and 1:11.69 while pressed by 34-1 Nimbostratus and stalked by 15-2 Closing Remarks. On the far turn the pacesetters tired as Pizzazz, 7th early, moved to 5 wide to lead through 7f in 1:23.94. Fluffy Socks, 8th early under Irad Ortiz Jr., came out 5 wide on the turn, bumping with 45-1 Consternation at the 1/4 pole but ralling late to win by 1/2 a length over Javanica in a stakes record 1:35.35. It was another neck back to 17-2 Quattroelle third. Drayden Van Dyke aboard 5th place finisher Consternation claimed foul against Ortiz aboard Fluffy Socks for interference. The stewards rules that although Fluffy Socks did drift out and bump Consternation the incident did not cost Consternation a chance at a better placing, so the claim was disallowed.
Full results chart from DRF 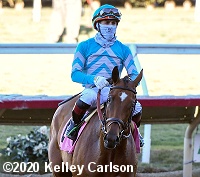 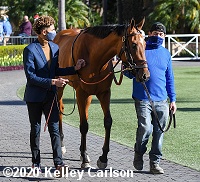 Left: Fluffy Socks in the winner's circle. Jose Hernandez, assistant to winning trainer Chad Brown said, "I don't think that anything will happen (with the inquiry). I don't see anything that would make them change it. I really thought this filly was going to win. She's a really nice one."

Right: Fluffy Socks in the paddock before the race. Winning jockey Irad Ortiz Jr. said, "No special instructions for me; (trainer Chad Brown) just said 'Ride her like you did before.' She felt like a winner all the way around. We had some traffic on the turn (for home), but I got through and got her to where I wanted to be. She's a nice filly. Big kick." 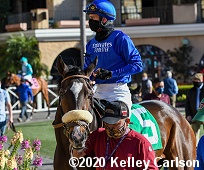 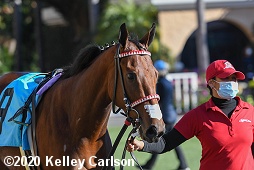 Left: Second place finisher Javanica in the paddock before the race. The Eoin Harty trainee improved her record to 1 win, 2 seconds, and 0 thirds in 4 starts, earning $63,933 for owner-breeder Godolphin.

Right: Third place finisher Quattroelle in the paddock. The Jeff Mullins trainee improved her record to 1 win and 2 thirds in 3 starts, earning $47,652 for owners Red Baron's Barn and Rancho Temescal.