The feature race on Saturday of closing weekend at Del Mar was the $300,000 Hollywood Derby (G1) for three-year-olds going 1 1/8 miles on the Jimmy Durante turf course. Conditions were typical for late November at the seaside oval for the 7,746 fans in attendance, with overcast skies and temperatures in the low 60's. Sharp Samurai was sent off as the 7-5 favorite in the field of 9, off a four race win streak including the Rainbow Stakes, La Jolla Handicap (G3), Del Mar Derby (G2), and Twilight Derby (G2). In to challenge him included 2-1 second choice Mo Town, winner of the 2016 Remsen (G2) and an allowance winner last out, and 8-1 third choice Big Score, second in both the Del Mar Derby (G2) and Twilight Derby (G2) after finishing 8th in the Belmont Derby (G1).

Jockey Drayden Van Dyke sent 55-1 longest shot Ritzy A.P. to the lead exiting the chute through fractions of 23.34 and 47.67 while pressed by 10-1 Souper Tapit and stalked by Sharp Samurai. On the far turn Ritzy A.P. tired allowing Souper Tapit to gain a short lead through 3/4 in 1:11.19 before he also dropped from contention. Sharp Samurai took over the lead midstretch through 1 mile in 1:34.57, but Mo Town, 8th early under John Velazquez, came out 4 wide for the drive and rallied to win by a length over late-running 9-1 Channel Maker in 1:46.36 over the firm going. It was a nose back to 8-1 Big Score third, and another nose to favorite Sharp Samurai fourth to complete the blanket photo for second. 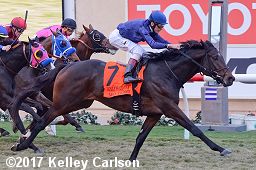 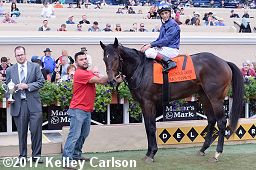 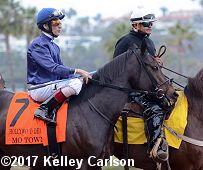 Left: Mo Town in the winner's circle. Winning trainer Tony Dutrow said, "My first trip to Del Mar and the people out here are so nice I can't wait to get back some day. It was a Grade 1 race and our horse had a chance and I just felt like we had to be here. The race itself? I don't know how this turf course plays, but I knew at the top of the stretch Mo Town had a lot of work to do and I'm glad he was up to it."

Right: Mo Town in the post parade. Winning jockey John Velazquez said, "So I got to try something different with this horse today. I've been trying to get him to settle. He broke slow, so I didn't panic with him. I let him settle and run right along. Then when I asked him he responded. He responded very well." 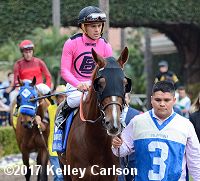 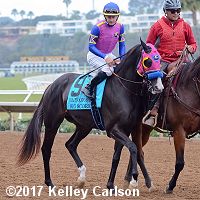 Left: Second place finisher Channel Maker in the paddock before the race. Jockey Javier Castellano said, "I saved all the ground. Then I cut the corner and there was some room on the rail. He ran huge. The winner got the jump on me."

Right: Third place finisher Big Score in the post parade. Jockey Flavien Prat said, "A good trip and a good try by this horse. He tries hard every time. You can't want more than that from him." 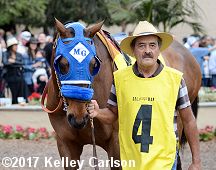 Fourth place finisher and beaten favorite Sharp Samurai in the paddock before the race. Jockey Gary Stevens said, "He's had a great year. He ran another good one. No excuses or complaints from me."


Kicking off the Saturday stakes trio at Del Mar was the $100,000 Native Diver Stakes (G3) for older horses going 1 1/8 miles on the main track. Awesome Again (G1) winner Mubtaahij was sent off as the 9-5 favorite in the field of 7 off his 9th place finish in the Breeders' Cup Classic (G1). In to challenge him included 2-1 second choice Top of the Game, winner of the Comma to the Top Stakes, and 3-1 Irish Freedom, 3rd in the Comma to the Top Stakes.

Jockey Flavien Prat sent 10-1 Curlin Rules to the lead first time by and he set fractions of 23.22, 47.55, and 1:12.25 over the fast main track while pressed by 7-1 Prime Attraction and stalked by Top of the Game. Entering the lane, jockey Victor Espinoza moved Prime Attraction out for room and he swept to the lead, opening up a 2 length lead through 1 mile in 1:37.37. Kept to task by Espinoza, Prime Attraction drew off to win by 2 1/2 lengths over late-running Irish Freedom in 1:49.87. It was a length back to favorite Mubtaahij third. 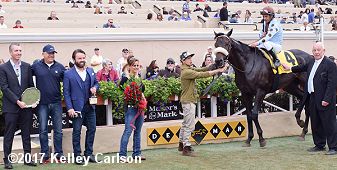 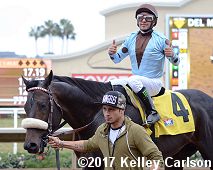 Left: Prime Attraction in the winner's circle. Winning jockey Victor Espinoza said, "The key with him is to not take a hold of him early. If you take a hold, he gets all cranked up and wants to go. But if you let him settle, get into a rhythm, then he's fine. He's strong; a really strong horse. And if you have to fight him, you're in trouble. But it worked out perfectly for me today. The speed was inside me so I could just let him go along there early. And when you can do that, he finishes strong. Just like he did today."

Right: Prime Attraction returns after the race. Winning trainer Jim Cassidy said, "Sometimes no matter what you do it works out. Victor (Espinoza) knows how to ride him. You can't grab this colt early, you've just got to hope that nobody sends, sends and goes with him early because he'll go as fast as he can and then he'll tire himself out. He got to go at it nice and easy and he didn't tire himself out today." 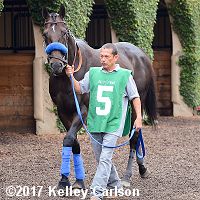 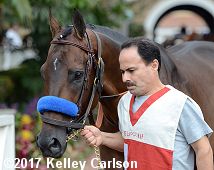 Left: Second place finisher Irish Freedom in the paddock before the race. Jockey Rafael Bejarano said, "We were in good position. No excuses for me today. The winner was best."

Right: Third place finisher and beaten favorite Mubtaahij in the paddock. Jockey Drayden Van Dyke said, "We were in a good spot. He closed, but just not enough. We didn't have a lot of pace to run at. He may want to run farther."


In the finale, a field of 12 two-year-old fillies went to post in the $100,000 Jimmy Durante Stakes (G3) at 1 mile on the turf. Daddy is a Legend was sent off as the 5-2 favorite off her maiden win at third asking, over 7-2 Fatale Bere, winner of the Surfer Girl Stakes before finishing 5th in the Breeders' Cup Juvenile Fillies Turf (G1), and 4-1 Data Dependent, a maiden winner at third asking last out. 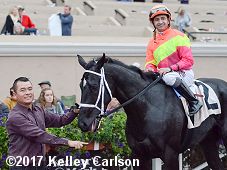 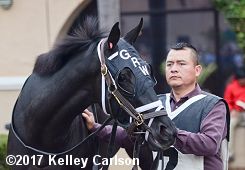 Left: Daddy is a Legend in the winner's circle. Winning jockey Joe Bravo said, "She's a big filly. She's a special one, too. I was following Chad Brown's horse (Data Dependent) around there and when she went I went right behind her. When we hit the stretch, I tipped her (Daddy Is a Legend) out and it was bye-bye. It was her race from there. She's special."

Right: Daddy is a Legend in the paddock before the race. Austin Trites, assistant to winning trainer George Weaver said, "She gave us a couple of scares, but we'll take it. For a split second, around the turn, I was very worried. But when Joe tipped her out and she got in the clear, she came home very well." 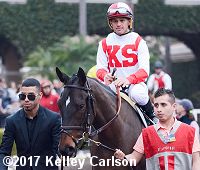 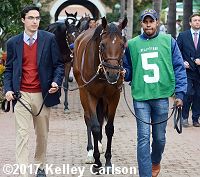 Left: Second place finisher Data Dependent in the paddock before the race. Jockey Javier Castellano said, "We had a good trip and she ran well. The winner was just much the best today."

Right: Third place finisher Raucous in the paddock. Jockey Flavien Prat said, "She ran well. She just seemed to lose focus for a bit in the stretch when she was in front, but that really wasn't going to affect her finish."