The 40,904 fans who came out to Monmouth Park on Sunday for the Haskell Invitational enjoyed 6 stakes races on the undercard. Spectators and participants enjoyed a mostly cloudy day with temperatures in the upper 70's, with a fast main track and firm turf course. 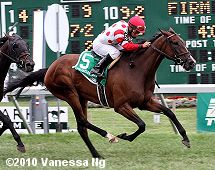 The richest race on the undercard is the $210,000 Taylor Made Matchmaker Stakes (G3) for older fillies and mares going 1 1/8 miles on the turf. Cherokee Queen was sent off as the 5-2 favorite in the field of 11 off a win in the Dr. James Penny Memorial Handicap at Philadelphia Park, over 7-2 second choice Tizaqueena, third in the All Along (G3) at Colonial last out, and 9-2 third choice Quiet Meadow, who was third in the Dr. James Penny.

Cherokee Queen stumbled badly at the start, unseating jockey Elvis Trujillo and then ran loose with the field. Tizaqueena contested the early lead with 10-1 Giant Mover through slow fractions of 24.38, 48.96, and 1:12.85. In the stretch, the field bunched up, but 42-1 outsider Unbridled Essence, who stalked the pacesetters in 4th early, pulled ahead of the pack to win by 1/2 a length over Quiet Meadow in 1:47.97 over the firm course. It was a head back to 5-1 fourth choice Tottie third. 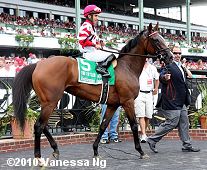 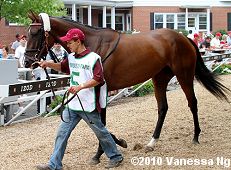 Left: Unbridled Essence in the winner's circle. Her trainer Gregg Sacco said, "We gave her the winter off. She came back bigger and stronger. In her first start back, she finished just behind Queen Martha, who gave Rachel Alexandra a race here last week. In her last start, she ran her eyeballs out. It was very special to win this for the Brunetti family, especially Steve Brunetti, who bred her."

Right: Unbridled Essence in the paddock before the race. 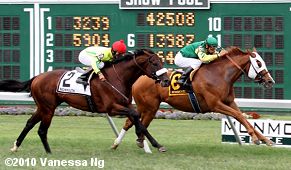 Immediately before the Haskell, a field of 7 older horses contested the $200,000 Oceanport Stakes (G3) at 1 1/16 miles on the turf. Last year's winner Get Serious was sent off as the even-money favorite off a third place finish in the United Nations (G1) over 4-1 second choice Violon Sacre, winner of the Battlefield Stakes last out, and 9-2 third choice Cherokee Artist, an allowance winner last out at Belmont.

Get Serious battled for the lead with 7-1 fourth choice Roman Tiger through easy fractions of 25.28, 49.63, and 1:12.49 over the firm course, with 10-1 Nownownow stalking them in third. Entering the stretch, Roman Tiger tired as Violon Sacre, 4th early, came out for the drive and closed well through the lane. However, Get Serious held him off in the final strides to get the win by a neck in 1:40.93. It was another 2 3/4 lengths back to Roman Tiger third. 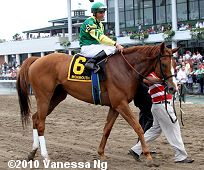 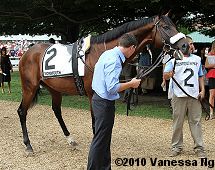 Left: Get Serious returns after winning his second Oceanport Stakes in a row. His trainer John Forbes said, "He just loves this racetrack and loves to win. In the stretch, I was probably as nervous as I've ever been with this horse, but he just digs in." Jockey Pablo Fragoso added, "That horse who came at me in the lane (Violon Sacre) was the only horse I was afraid had a chance to beat me."

Right: Second place finisher Violon Sacre in the paddock. The 4-1 second choice raced 4th 2 1/2 lengths off the pace under jockey Jose Lezcano, came out for the drive but just missed. The Patrick Biancone trainee improved his record to 8 wins, 3 seconds, and 0 thirds in 15 starts, earning $279,392 for owner Bernard Weill. 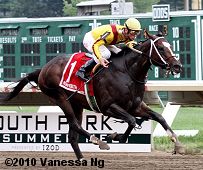 Kicking off the stakes action on Haskell day was the $150,000 Majestic Light Stakes for older horses going 1 1/16 miles on the main track. 38-1 Hermosillo battled for the early lade with 4-1 second choice Omniscient through slow fractions of 48.37 and 1:12.75. 9-5 favorite Cool Coal Man, who stalked them in third, came out for the drive to challenge but Omniscient easily turned him away, drawing off to win by 2 lengths in 1:43.31. It was another 3 lengths back to late-running 8-1 Manteca third. 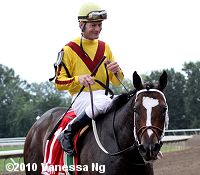 Omniscient returns after the race. His jockey Calvin Borel said, "Cool Coal Man really tried me at the 1/8 pole but my horse kept digging. I got my horse to relax early on, and when I called on him, he came running. He was really game all the way to the wire." 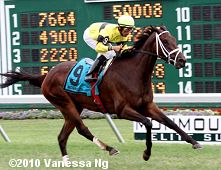 A field of 8 three-year-olds contested the $150,000 Jersey Derby at 1 1/16 miles on the turf. 2-1 favorite Fantastico Roberto was loose on the lead early, as many as 4 lengths in front down the backstretch with 5-2 second choice Two Notch Road stalking him in second through fractions of 47.50 and 1:11.37. Entering the stretch, the pacesetters tired as 8-1 Hudson Steele, who was 7th early, closed with a rush down the center of the course to win going away by 2 1/4 lengths over late-running 5-1 Audacity of Hope in 1:41.07. 7-1 They Call Me Giant was another 1/2 length back in third, while favorite Fantastico Roberto faded to 7th. 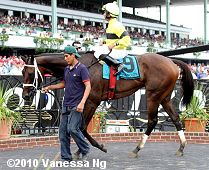 Hudson Steele in the winner's circle. His trainer Todd Pletcher said, "He sure seems to have found a home on turf. He was more professional today. Last time in Indiana he made the lead and didn't seem to know what to do. Today, he had a good trip and came with one run." 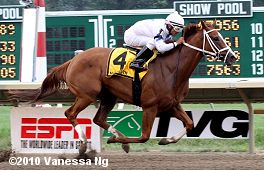 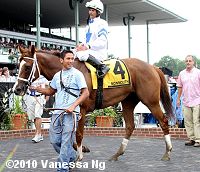 Lady Alexander in the winner's circle. Her trainer Bruce Alexander said, "She loves this track. Sometimes I question myself why I run someplace else. Just before her last race, she worked really fast, and then ran fourth. That scared me enough that this time I chose not to work her at all. Carlos (Marquez) rode a great race. Just nursed her along early. I knew at the top of the stretch that she was a winner." 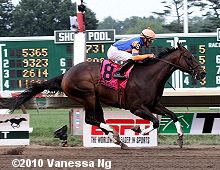 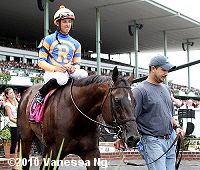 Roaring Lion in the winner's circle. His jockey Eddie Castro said, "He broke fast out of the gate but I quickly grabbed a hold of him. I tried to keep him as relaxed as possible early on and I knew I was sitting on a lot of horse. I let him go turning for home and he ran on."

On to the 2010 Haskell results and photos