Meadowlands Racetrack in New Jersey is the home of the $1.5 million Hambletonian, the biggest race of the year for 3-year-old trotters. Seventeen 3-year-old trotters were entered in this year's eliminations which were split into 2 divisions with favorite Ken Warkentin going in the first. It was a busy day of racing with three eliminations for the Hambletonian Oaks as well as four $250,000 stakes finals at the odd distance of 1 1/16 miles: the Classic Pace, Classic Trot, Classic Distaff, and Classic Oaks on the card. 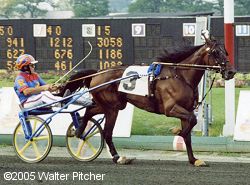 The first elimination saw a field of eight line up behind the gate, with Ken Warkentin sent off as the prohibitive 2-5 favorite. He stalked the early pace of 8-1 shot Vivid Photo through a half in 55 2/5 and 3/4 in 1:23 3/5, but in a shocker, broke stride early in the stretch and lost all chance, finishing seventh and out of the final. Vivid Photo held off the late run of Southfork to get the nod in a time of 1:53 2/5 for the mile. It was another neck back to Self Professed in third. However, Southfork was disqualified by the judges to last place, moving Self Professed to second and 4th place finisher Strong Yankee to third. Roger Hammer, who owns, trains, and drives Vivid Photo, said "I was planning more to maybe get away third and make a move at the quarter since he was up there. But then I couldn't get him back up enough without taking too much hold of him. He was still strong. Getting down toward the end, near the wire, I just looked over, I just wanted to get home. I didn't worry about where we finished, as long as we got home. At least it don't cost me nothing to enter now. He's paid his way." 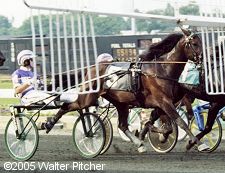 Beaten favorite Ken Warkentin behing the gate at the start of the race. His driver David Miller said, "He's never, ever done anything wrong and today for some reason he takes a bad step. I really believe he was going to go right by that horse. I didn't do anything different than I've ever done with him, and he just took a bad step. I want to puke. I'm very, very disappointed." 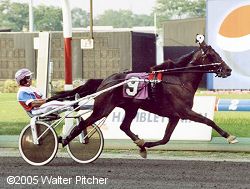 Nine colts went to post in the second elimination, with Classic Photo bet down to 4-5 favoritism. Settling in fourth early behind the pacesetting 3-1 second choice Vino Carnielle through a half in 55 1/5 and 3/4 in 1:24 3/5, he made his move late on the turn, got the lead with a furlong to go, and drew away to win by 3 lengths over 26-1 longshot Northern Ensign in a time of 1:53 3/5. It was just 1/2 a length back to Muscle Bound in third. Winning driver Ron Pierce said, "This little fellow has shown to everybody he can race any way he wants. He can take all the air. He kind of likes to have a target, but it doesn't matter if he does or not. I feel I have just as good a horse as anybody else if not better. I think I'm the one to beat." 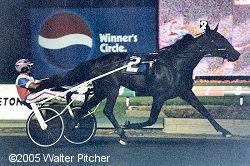 The Trotting Classic saw a field of eight go to post, but 2-5 favorite Mr Muscleman turned it into a one-horse race once they turned for home. Taking over the lead at the top of the stretch, he drew away to win by 2 3/4 lengths in a world-record time of 1:58 4/5 for the distance. Winning trainer Noel Daley said, "He's very easy to train. He does everything you tell him. He's a pleasure to have. You really get to appreciate a horse like this. He always appears like he's getting better. He's always been a tall horse. Now he's filled out and come into himself. There's no reason why he can't go on for another couple years. If all things are all right, he still has a lot of racing to do yet. He's a gelding and as long as he keeps coming back the way he is, he's going to be around for a few years." 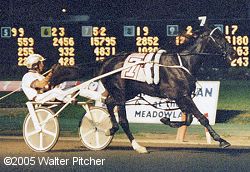 The Pacing Classic saw a similar result as 5-2 second choice Boulder Creek stalked the early pace of 2-1 favorite Ponder through 3/4 in a brisk 1:21 4/5, and drew away through the lane to win by 2 3/4 lengths over Metropolitan in a time of 1:56 2/5, a new world record for the distance for older pacers. Winning driver Brian Sears said, "There was some movement, a little jousting around going into the half, but it worked out. It was a really good trip. The horse has been really sharp the last few weeks but just hasn't been able to get in the perfect spot. Tonight he was. In the deep stretch, I was just looking for a way out. I know I'm loaded and looking for a little daylight. He's been super the last few weeks but hasn't been in the perfect spot." 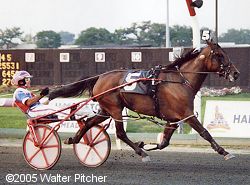 Six older pacing fillies and mares went to post in the Classic Distaff. 2-1 second choice Burning Point contested the pace early, took over at the top of the stretch, and drew away to a 2 1/4 length win over 7-2 third choice Glowing Report, in a time of 1:58, equaling the world record. 9-10 favorite Carolina Sunshine was third. Winning driver Ron Pierce said, "She was really good today. Burning Point had a lot of pace. I have to thank Kevin Wallis and the Cuzzins Stable and Steve Elliott for giving me this drive on her. I was stuck without a horse when I lost Rainbow Blue [to injury] earlier in the year, and they came through for me giving me this ride. I'd like to express my appreciation. She's right up there with the best of them." 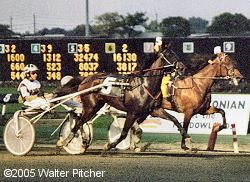 The Classic Oaks saw 3-5 favorite Peaceful Way rally from 5th place early on to just get up by a neck in a time of 2:01 2/5 over pacesetting 2-1 second choice Housethatruthbuilt. It was another 1 1/4 length back to 16-1 shot Mystical Sunshine in third. Owner and trainer David Tingley said, "It's unbelievable where she came from. It was getting too close. After those fractions, I thought we could be in trouble. She's a great horse. And great horses overcome adversity. And she certainly did again tonight. I think there is more to come. Breeders Crown is a month away, so if can do that there, God knows what she can do."

The companion feature to the Hambletonian next weekend is the Hambletonian Oaks for 3-year-old trotting fillies. In the first Oaks elimination, 3-1 second choice Jersey Gal contested the pace the whole way, and got her neck in front at the line in 1:54 1/5 over 18-1 shot Vyingforthecrown. 6-5 favorite Margarita Nights finished fourth. Winning trainer Kevin Lare said, "The trip worked out really well. The five-hole was not the best spot for us to be but ended up working out really well. She has great gate speed. Last week we elected not to use that, and it didn't suit her. She wants to be up near the front. She got a nice cover trip, 55 2/5 was a big half for these trotting fillies. I'm very happy to have a shot here." 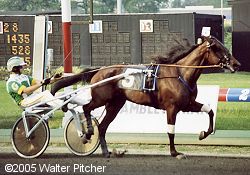 The second elimination saw 7-1 shot Jalopy win in gate-to-wire fashion in a time of 1:55. 11-10 favorite Flirtin Miss broke stride at the 1/2 mile marker, never got back into it, and disappointed in eighth. Winning trainer Jonas Czernyson said, "She got hurt as a two-year-old, crashed into a fence, and hurt her shoulder. We took it easy and tried to save her for this year. We tried to take it easy in the beginning and in the end we figured we had to go for the Oaks, so we had to try. We feel pretty good." 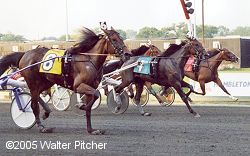 In the third Oaks elimination, 3-1 shot Flawless Bluestone (#6 in the photo) used a staking trip to prevail by 3/4 length over 6-5 favorite Blur, in a time of 1:55 2/5. It was another length back to Magenta Hall in third. Winning trainer Joe Holloway said, "At the 3/4 pole I liked her chances for getting qualified. I wasn't sure about winning though. The way it worked out the three favorites were lined up one, two, three first over and those were the ones we had to beat. We had to tip three high on the turn, and that's a tough move at the Meadowlands. You lose a little and that worried me as far as winning goes. But she keeps digging in and that wins just as many races as speed."