The feature race at Woodbine on Sunday was the $125,000 Grey Stakes (G3), a 1 1/16 mile Tapeta main track contest for 2-year-olds, which often plays a role in deciding Canada's champion 2-year-old male, and has also been used as a prep for the Breeders' Cup Juvenile. Conditions were excellent for early October with partly cloudy skies and temperatures in the low 60's. Peppered was sent off as the 1-2 favorite in the field of 7 off a maiden win at second asking by 7 lengths on September 9. In to challenge him included 3-1 second choice Piven, second in the Colin Stakes, and 9-1 third choice Archaggelos, a maiden winner at second asking last out at Laurel Park. 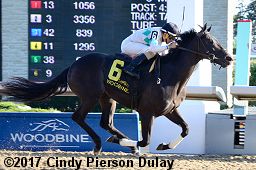 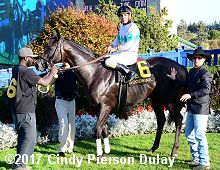 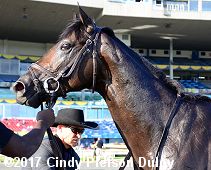 Left: Archaggelos in the winner's circle. Dirk Crane, assistant trainer to Michael Dickinson said, "He gets a little bit nervous [shipping], but I spent a lot of time and our team at home has spent a lot of time trying to get this horse prepared so that we would be successful at a race like this" The colt is a half-brother to 2008 Kentucky Derby and Preakness winner Big Brown.

Right: Archaggelos gets hosed off after the race. Jockey Rafael Hernandez said, "We saved ground all the way and I didn't want to go too wide so we just waited for a hole to open. That happened and he went between horses like nothing, he was brave." The name means "archangel" in Greek. 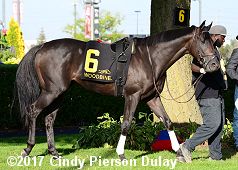 Left: Archaggelos in the paddock before the race. Crane added, "I really liked the ride that we got. I started getting a little bit nervous just because I'm an ex-rider so it's hard to tell what's going on. As he was running, I was very happy how he waited and let that inside position happen. And then as he came down the lane, he just gutted through there and went on running like we wanted him to do."

Right: The field breaks from the gate for the Grey Stakes. 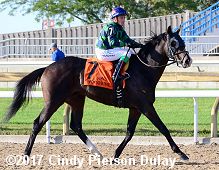 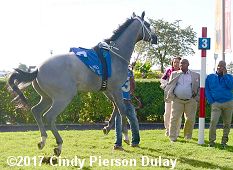 Left: Second place finisher and beaten favorite Peppered returns after the race. The 1-2 choice raced in 4th 3 lengths off the pace under Luis Contreras then rallied to get second beaten 2 1/4 lengths. The Reade Baker trainee improved his record to 1 win, 1 second, and 1 third in 3 starts, earning $55,446 for owners Paul Braverman and Timothy Pinch.

Right: Third place finisher Tale of Vienna threw a bit of a fit in the paddock before the race. He was the only gray horse in the Grey Stakes. The 43-1 longest shot raced in 6th 11 lengths off the pace under Omar Moreno then rallied to get third beaten 3 3/4 lengths. He improved his record to 1 win and 1 third in 2 starts, earning $39,256 for owner-trainer Laurie Silvera and co-owner Dennis Moss.


The co-feature on Sunday was the inaugural $50,000 Grey Starter Handicap for older grey/roan horses which have started for a claiming price of $20,000 or less in 2016 or 2017. A field of 10 faced the starter for this 1 mile trip around 1 turn of the firm E.P. Taylor Turf Course (GoingStick reading 11.0). Jockey Jesse Campbell sent 7-1 Fleetway to the lead through fractions of 23.77 and 47.08 while pressed by 30-1 Tale of Ronin and stalked by 3-1 second choice Silver Sidney. Entering the lane, 5-2 favorite Hampstead Heath gained a short lead through 7f in 1:23.64, but 7-2 third choice Arthur's Pass, 9th early under Alan Garcia, moved to the stands side for room and rallied by, outfinishing 5-1 Gray Phantom by a head in 1:34.80. It was another 3 lengths back to favorite Hampstead Heath third. 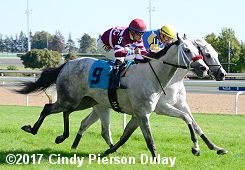 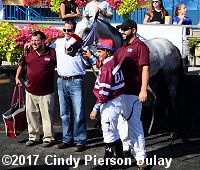 Left: It was a photo finish between #10 Gray Phantom (inside) and #9 Arthur's Pass who won.

Right: Arthur's Pass and his connections pose after the race. Winning jockey Alan Garcia said, "Don (MacRae, trainer) has given me a lot of opportunities and it was great to take a picture with this grey horse. He always had his head in front. He ran a very good race. After the wire, I was celebrating because I already knew we had won." 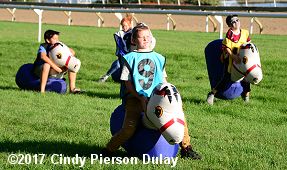 There was one more race for gray "horses" after the Grey Stakes with ten kids on white bouncy horses. #9 won but they all had fun.