The feature race at Del Mar on Sunday was the $150,000 Green Flash Handicap (G3) for older horses sprinting 5 furlongs on the Jimmy Durante Turf Course and is a Breeders' Cup Challenge "Win and You're In" qualifier for the Turf Sprint at Keeneland on November 5. Conditions were excellent at the seaside oval with the 9,226 fans in attendance enjoying sunny skies and temperatures in the mid 80's. A field of 10 went to post with last year's winner Lieutenant Dan sent off as the 9-10 favorite, unraced since finishing second in the Breeders' Cup Turf Sprint (G1) over the same course. In to challenge him included 3-1 second choice Dubai Key, winner of 3 consecutive allowance races since being imported from Chile, and 8-1 third choice Whatmakessammyrun, fifth in the Jaipur (G1) in June and a close second last out in allowance company.

Jockey Hector Berrios sent Dubai Key to the lead down the backstretch through an opening quarter of 21.77 pressed by 22-1 Maven and stalked by Lieutenant Dan. Turning for home, Dubai Key continued to lead through a half in 44.54 but Lieutenant Dan and jockey Juan Hernandez found room on the inside and rallied to win by 1 1/4 lengths over late-closing 9-1 fourth choice Lane Way in 55.87. It was a head back to 24-1 Coulthard third. 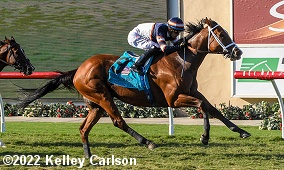 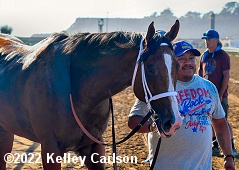 Left: Lieutenant Dan in the winner's circle. Winning trainer Steve Miyadi said, "He's not as quick as last year but he has a new rider and that's Juan's (Hernandez) nature. If he sees a speed duel developing he likes to wait. He got to the inside and we were lucky it opened up. It wasn't at all like we thought but he switched leads on cue and kept going."

Right: Lieutenant Dan heads back to the barn. 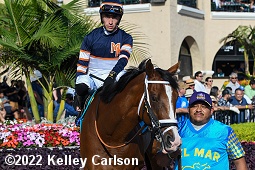 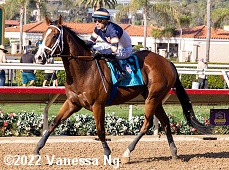 Left: Lieutenant Dan in the paddock. Winning jockey Juan Hernandez said, "He's a really nice horse. He broke really well and I didn't bother him because he took me there and I saw a couple horse with more speed than me so I just sat behind them and waited inside. When we turn the corner, there was a little space for me and we go there. He has a really nice kick inside, really professional. I shook the reins a little bit and he picked it up." 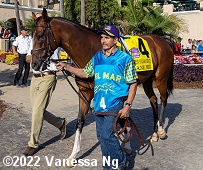 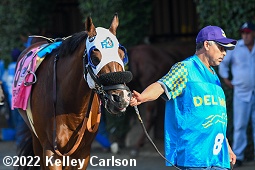 Left: Second place finisher Lane Way in the paddock before the race. The Richard Mandella trainee improved his record to 2 wins, 4 seconds, and 5 thirds in 13 starts, earning $178,560 for owner MyRacehorse.

Right: Third place finisher Coulthard returns after the race. The Phil D'Amato trainee improved his record to 3 wins, 2 seconds, and 5 thirds in 14 starts, earning $188,957 for owners Jay and Julie Manoogian. 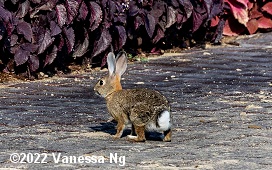 This bunny apparently lives in the paddock.

Earlier in the afternoon, the $125,000 Torrey Pines Stakes (G3) featured a field of 6 three-year-old fillies going 1 mile on the main track. Kentucky Oaks (G1) third place finisher and Clement L. Hirsch Stakes (G1) runner-up Desert Dawn was sent off as the 6-5 favorite over 8-5 second choice Under the Stars, winner of the Summertime Oaks (G2), and 11-2 third choice Midnight Memories, making her stakes debut off a third place finish in allowance company last out. 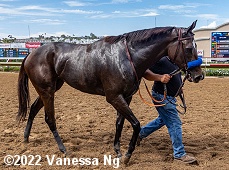 Left: Midnight Memories in the winner's circle. Winning trainer Bob Baffert, who also trains third place finisher Grace Adler and fifth place finisher Under the Stars said, "I told Vaz (jockey Ramon Vasquez) I don't know how far she'll go but just leave there and put her on the lead. I was afraid when Desert Dawn (came to her) because she has a lot of races under her belt. We've been high on this filly all along. I would have liked to run one-two-three but it's been a good day."

Right: Midnight Memories heads back to the barn after the race. 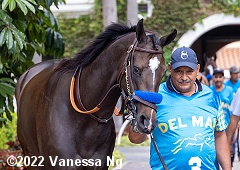 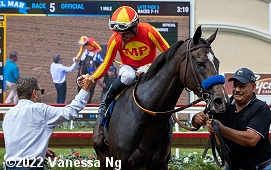 Left: Midnight Memories in the paddock before the race. Winning jockey Ramon Vazquez said, "She broke well and we were going easy on the lead. Then when it came time, she dug in down the stretch. She's a very nice filly. I'm so happy to be riding at the meet for the first time and doing well. I wanted to ride for someone like Bob Baffert and here I am. Today I rode two horses for him and both were winners. It's exciting." 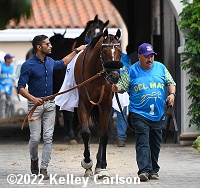 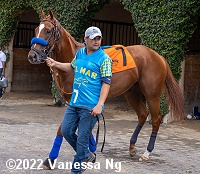 Right: Fourth place finisher Grace Adler in the paddock before the race. The Bob Baffert trainee improved her record to 2 wins, 1 second, and 1 third in 6 starts, earning $258,300 for owners Willow Grace Farm and Michael Lund Petersen.

The fillies break from the gate for the Torrey Pines Stakes.