The feature race on the second Sunday of the 2020 Bing Crosby fall meeting at Del Mar was the $75,000 Betty Grable Stakes, a 7 furlong main track sprint for California-bred or sired older fillies and mares. Earlier rainfall downgraded the track to "good", with the feature race conducted under cloudy skies with a post time temperature of 58 degrees and 18 MPH wind gusts. Just Grazed Me was sent off as the 3-2 favorite in the field of 8 off her win in the California Distaff Handicap after finishing 5th in the Monrovia. In to challenge her included 2-1 second choice Warren's Showtime, winner of teh Autumn Miss Stakes (G3) after finishing 3rd in the Del Mar Oaks (G1), and 5-1 third choice Mo See Cal, unraced since winning last year's edition of the Betty Grable after finishing 6th in the Breeders' Cup Distaff (G1).

Jockey Abel Cedillo sent 12-1 Miss Megan to the front exiting the chute through fractions of 23.34 and 47.22 while pressed by 27-1 Hotitude and stalked by Mo See Cal. Turning for home Miss Megan tired as jockey Flavien Prat moved Mo See Cal out for room and she swept to the front, opening up a 4 length lead through 6f in 1:12.31. Kept to task by Prat, Mo See Cal cruised the rest of the way to finish 3 3/4 lengths ahead of late-running Warren's Showtime in 1:25.01. It was another 3/4 length back to favorite Just Grazed Me third. 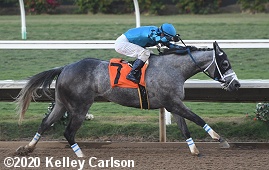 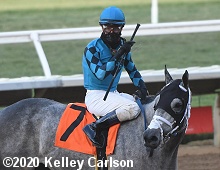 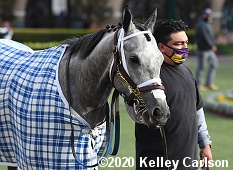 Left: Mo See Cal in the "winner's circle". Winning trainer Peter Miller said, "Great weekend. Good run at the Breeders' Cup and then to win all three stakes here. What could be better than that? I'm really just proud of the mare. They did a great job bringing her back after surgery (bone chips in knees) and a great ride by Flavien. I told him there were two that were going to go and I didn't want him to get involved with them. The pace was slow and he was kind of right on them, but he knows when to go. He knew it was time to go and he went. We put blinkers on because she'd won with them before and I'm kind of a tinkerer. She'd also won without them."

Right: Mo See Cal in the paddock before the race. Winning jockey Flavien Prat said, "We were just cruising on the backside and when we came up to the turn I decided to see what she could do. She responded well. I don't know if the blinkers (added them today) made a difference, but if they did it was a good one." Prat has won the last 4 runnings of the Betty Grable Stakes. 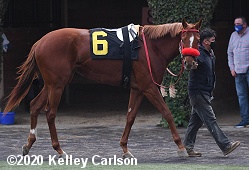 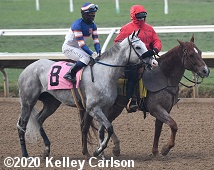 Left: Second place finisher Warren's Showtime in the paddock before the race. The Craig Lewis trainee improved her record to 6 wins, 1 second, and 5 thirds in 14 starts, earning $539,251 for owner-breeders Benjamin and Sally Warren.

Right: Third place finisher and beaten favorite Just Grazed Me in the post parade. The Phil D'Amato trainee improved her record to 7 wins, 4 seconds, and 2 thirds in 15 starts, earning $506,332 for owner-breeder Nick Alexander.