The $300,000 Gotham Stakes (G3) is the first major New York prep for the Kentucky Derby, and is worth 50 points to the winner as part of the Kentucky Derby Championship Series. Conditions on Long Island were typical for early March, with cloudy skies and temperatures in the low 40's, and the main track rated fast. A field of 10 three-year-olds contested this 1 mile trip around one turn of the main track, with Morello sent off as the even-money choice, undefeated in 2 starts including the Jimmy Winkfield Stakes last out. In to challenge him included 7-2 second choice Rockefeller, second in the Sham (G3) at Santa Anita after winning the Nashua (G3) at Belmont, and 11-2 third choice Dean's List, undefeated in 2 starts in allowance company and making his stakes debut here.

Jockey Manny Franco sent Dean's List to the lead exiting the chute and he set fractions of 23.47, 47.77, and 1:13.04 while pressed by Morello and stalked by 27-1 Golden Code and 39-1 Runninsonofagun. Turning for home, Morello and jockey Jose Lezcano took over the lead and under a mild hand ride, drew off late to win by 4 1/2 lengths over Dean's List in 1:39.28. It was another length back to Golden Code third. 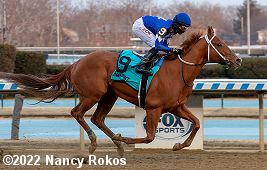 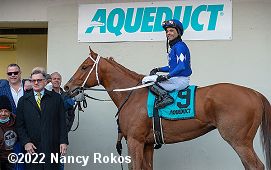 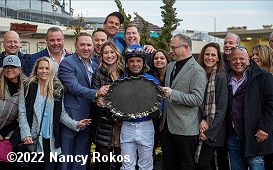 Left: Morello in the winner's circle. Toby Sheets, assistant to winning trainer Steve Asmussen said, "He got banged around coming out of there and the 10 [Rockefeller] came over on top of him, but he just overcomes it like always. He just gets out and runs easy. He hasn't been hit by the stick yet. I don't see why not (stretch out in distance). He definitely acts like it."

Right: Trophy presentation for the Gotham. Winning co-owner Dave Lyon said, ""He had to use a little more of the tank today and use another gear, but he showed us that he's got it. I don't want to look past this race - we want to celebrate this - but we're thinking he can go longer. I don't know how long he could go but we're all from Saratoga and we'd certainly want to win the Travers. I want that canoe more than I want the Kentucky Derby trophy - but I'll take that one, too." 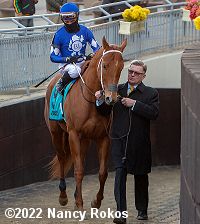 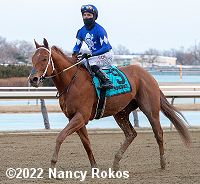 Left: Morello in the paddock before the race. Winning jockey Jose Lezcano said, "He's a very nice horse who has been doing everything right. He's one of the nicer horses I've ridden in the last three years. I never even touched him with the whip. You ask him a little bit and he takes off – it's a good thing. I've ridden some good horses and he's showed me he's one of those."

Right: Morello returns after the race. Lezcano added, "[Dean's List] kept going and my horse just dragged me over and I had to keep holding and holding and I didn't want to let him pass too early. At the quarter-pole, I had to let him go. Last time, he went seven-eighths and struggled a little for the first three-eighths. After that, he jumped into the bridle and won easy. Today, he was very comfortable the whole way. He was right there and when I asked, he was gone. Every race, he's improved and gotten better and better." 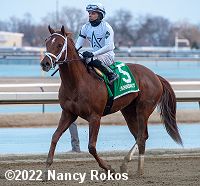 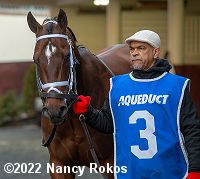 Left: Second place finisher Dean's List returns after the race. Jockey Manny Franco said, "He was second-best today. My horse ran great today the first time going a mile. I set a moderate pace in front and he just got outrun by a better horse now. I think he can go the mile no problem, but let's see how he comes out and what the future holds. I really like the way he ran today. He wasn't doing anything wrong. He won his [first] two races and today he showed me he belongs here."

Right: Third place finisher Golden Code in the paddock before the race. The Todd Pletcher trainee improved his record to 1 win, 1 second, and 1 third in 3 starts, earning $88,500 for owner Calumet Farm.


Kicking off the stakes action, a field of 5 older horses contested the $200,000 Tom Fool Handicap (G3) over 6 furlongs on the main track. Fall Highweight Handicap (G3) third place finisher and Gravesend Stakes winner Chateau was sent off as the 1-2 favorite over 4-1 second choice Repo Rocks, second in the Toboggan (G3), and 9-2 third choice Prime Factor, an allowance winner at Fair Grounds last out.

Jockey Kendrick Carmouche sent Chateau to the lead through fractions of 22.66 and 46.19 while pressed by Prime Factor and stalked by 11-2 fourth choice Officiating. Turning for home, Chateau continued to lead through 5f in 58.99 but Officiating came out 3 wide and rallied by to win by 5 1/2 lengths in 1:12.22. It was another 1 1/4 lengths back to Repo Rocks third. 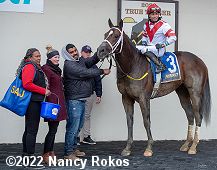 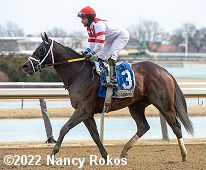 Left: Officiating in the winner's circle. Winning trainer Saffie Joseph Jr. said, "It was very exciting. He cut back to six furlongs for the first time and he wasn't outpaced. He was always in a handy spot. I was sure at the top of the lane he was going to kick in because he was cutting back in distance, and he did just that. I'm very proud of the horse. I would say (the Carter Handicap) would definitely be under consideration."

Right: Officiating returns after the race. Winning jockey Manny Franco said, "Just like they told me: break out of there, get good position and try to be in the clear. The race developed the way we planned and he got it done. He was ready. Every time I asked him to do something, he was there for me. I watched his replays and the more you push him, the more he goes. I was happy with where my horse put me and I was just waiting for the right moment to move. I wasn't worried at all, I wasn't too far away from [Chateau]." 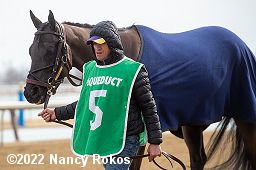 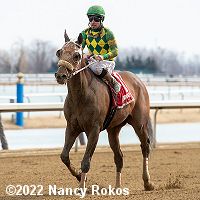 Left: Second place finisher and beaten favorite Chateau walks over before the race. Jockey Kendrick Carmouche said, "The track was a little heavier than he probably would have liked, but he still ran his race."


The distaff counterpart to the Gotham is the $250,000 Busher Invitational Stakes featuring a field of 5 three-year-old fillies also going 1 mile on the main track, worth 50 points to the winner as part of the Kentucky Oaks Championship Series. Forward Gal (G3) runner-up Radio Days was sent off as the 1-2 favorite over 9-2 second choice Magic Circle, winner of the Busanda after finishing 3rd in the Demoiselle (G2), and 5-1 third choice Sterling Silver, undefeated in 2 starts including the Franklin Square last out.

Jockey Kendrick Carmouche sent Magic Circle to the lead exiting the chute and she set fractions of 24.23, 48.19, and 1:12.62 while pressed by Radio Days and stalked by 11-2 fourth choice Venti Valentine. Entering the stretch Venti Valentine came out 4 wide to sweep to the lead through 7f in 1:25.82. Kept to task by Manny Franco, Venti Valentine drew off late to win by 7 lengths over late-running 23-1 longest shot Shotgun Hottie in 1:39.65. It was another 3/4 length back to Magic Circle third, and 3 3/4 more to favorite Radio Days fourth. 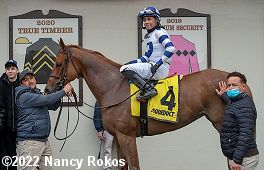 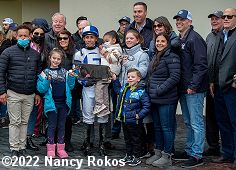 Left: Venti Valentine in the winner's circle. Winning jockey Manny Franco said, "I knew the pace wasn't going to be that fast. So I wanted to come out running. I saw Dylan [Davis aboard Radio Days] went with Kendrick [Carmouche aboard Magic Circle] and I was able to go around them, and after that I was comfortable where I was. I was in the middle in the stretch so I was worried about somebody coming from the outside, but I didn't see anyone. She's a nice filly. She's improving every time she runs.

Right: The trophy presentation for the Busher. Winning co-owner Dan Zanatta said, "All day, I thought the track was playing to her favor. It wasn't too fast and I thought the race was really shaping up for her on paper. It all came together. I think we wanted to be a little more forwardly placed and get outside earlier, but Manny got her in the perfect spot. She fired and Jorge (Abreu, trainer) did a great job getting her ready off the layoff so everything came together perfectly." 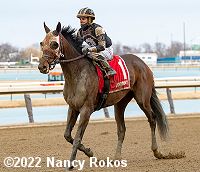 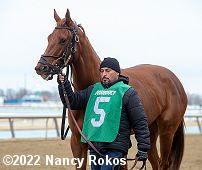 Left: Second place finisher Shotgun Hottie returns after the race. Jockey Eric Cancel said, "I liked my filly. I worked her last week and she worked very well. I had a good trip in the beginning of the race behind the turn. She started backing up from all the horses up front and took her time to get her gear going. Once we got to the quarter-pole, she started responding back again and never gave up."

Right: Third place finisher Magic Circle walks over before the race. The Rudy Rodriguez trainee improved her record to 2 wins, 1 second, and 2 thirds in 6 starts, earning $224,000 for owner J.W. Singer.