The $400,000 Gotham Stakes (G3) is the first major New York prep for the Triple Crown, and is worth 50 points to the winner under the new Road to the Kentucky Derby. Conditions were excellent for the first Saturday in March, with cloudy skies and temperatures in the low 40's. A field of 11 three-year-olds contested this 1 1/16 mile inner track feature, before just 7056 fans at the Ozone Park oval. As expected, Remsen (G2) winner Overanalyze was sent off as the 8-5 favorite in his first start of 2013. In to challenge him included 9-4 second choice Vyjack, undefeated in three starts including the Jerome (G2), and 7-1 third choice Escapefromreality, second in the Withers (G3). 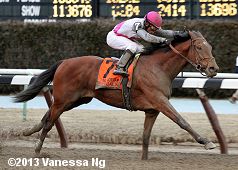 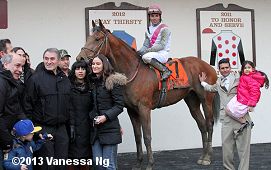 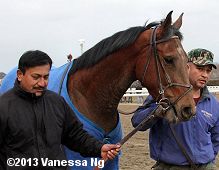 Left: Vyjack in the winner's circle. Winning owner David Wilkenfeld said, "It's amazing. Words can't describe it. You buy a horse, you hope for this, but it's not something you really think about. I was nervous (when he was so far back) because I've been watching the races all day and everything is first to second and pretty tight. I saw him way back - I saw he broke a step slow - but Joel got him to relax and he ran like we thought he could run. That's always been our game plan to stay at Aqueduct (and run in the Wood). We wanted to get a two-turn race and we thought the Jerome was a little quick, but the Withers was too close to the Gotham and the Wood, so we took a chance and ran back quickly. Then we wanted to take the time and work with him and give him the proper rest and let him mature."

Right: Vyjack heads back to the barn after the race. 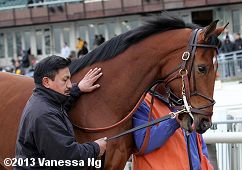 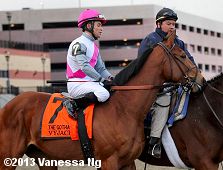 Left: Vyjack heads into the paddock before the race. Jockey Joel Rosario said, "A perfect trip. He had always showed a lot of speed, but he was very relaxed today. I let him do whatever he wanted. He looked very good today. He showed he can come from off the pace. He was very relaxed. He broke OK, and I didn't want to get in a hurry. I just let him do whatever he wanted to do. He was pretty relaxed behind horses, and he did everything right. Turning for home, I was pretty far behind, but that's where he wanted to be. He passed West Hills Giant, and then he just kept on going."

Right: Vyjack heads out for the post parade. Trainer Rudy Rodriguez said, "He was able to relax good and be comfortable. He showed that he's a really good horse. I told Joel just not to move too soon, let him do his race. I don't think we've gotten to the bottom of him yet. We'll see (about the Derby). We'll take it one step at a time, hopefully he'll keep improving. I'm excited about him, that's for sure. We thought maybe this horse could take us there. So far he's proven he can belong with this kind. Hopefully he can keep going." 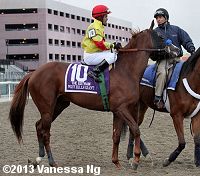 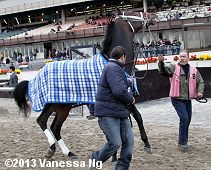 Left: Second place finisher West Hills Giant heads out for the post parade. Trainer John Terranova said, "He was a little green; he was laying in a little bit when Jose asked him to go on. He finally switched on once that horse went by him. He's always been a little green; that's why we put blinkers on him. We may have to close them up a little bit. We have just a small cup on him; we may have to work with that a little bit, but I think this race will bring him on even more. If he goes forward, we'll stay right here (for the Wood). He's a New York-bred, no reason to leave here."

Right: Third place finisher Elnaawi acts up as he heads into the paddock before the race. The 8-1 fourth choice raced 6th early under jockey Channing Hill, then closed late to get third beaten 2 3/4 lengths. The Kiaran McLaughlin trainee improved his record to 1 win and 2 thirds in 3 starts, earning $85,200 for owner Shadwell Stable. 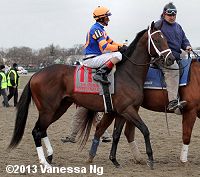 Left: Fifth place finisher and beaten favorite Overanalyze in the post parade. Jockey John Velazquez said, "I was where I wanted to be, perfect position, nice pace. He didn't come up with any run at all. When we got to the turn at the 3/8 pole, he let go and just didn't come with any run at all. Sometimes they need to get back to the distance again; maybe he needed the race." Mike McCarthy, assistant to trainer Todd Pletcher added, "He's got a race under his belt now. Todd and Mike (Repole, owner) will put their heads together and figure out a spot for him next time."

Right: The horses pass by for the first time in the Gotham.

The first stakes race on Saturday was the $200,000 Top Flight Handicap (G2) for older fillies and mares going 1 1/16 miles on the inner track. Summer Applause was sent off as the 6-5 favorite in the field of 7 off a disappointing 6th place finish in the Houston Ladies Classic. In to challenge her included 3-1 second choice Sunny Desert, off a 6 race winning streak including the Cat Cay last out, and 7-2 third choice Twice the Lady, winner of the Affectionately.

Jockey Jacqueline Davis sent 30-1 Natalie Victoria to the front through fractions of 23.52 and 47.05 before tiring, as 4-1 Sisterly Love took over the lead through 3/4 in 1:11.80. Turning for home, Summer Applause, who stalked the pace in third, easily gained the lead, drawing off to win by 2 3/4 lengths over Twice the Lady in 1:44.10. It was a neck back to Sunny Desert third. 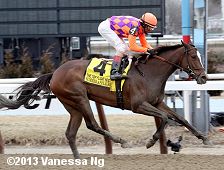 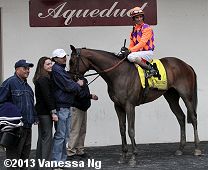 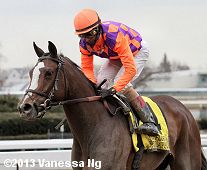 Left: Summer Applause in the winner's circle. Winning jockey John Velazquez said, "When the two horses didn't break, I tried to just come out and get a nice position going into the first turn. At the 3 1/2, I let her go. I watched the races, and it seemed like if she is close to the pace she finishes better. Last time, I didn't ride her, but she was too far back and didn't really put in any effort. Today, she's where she wanted to be. Definitely (made the lead too soon). I didn't know she was going to do that. When she got to the lead, she started waiting and lugging in, but she got the job done, anyway." 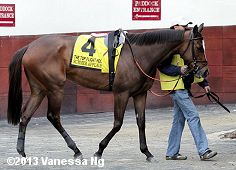 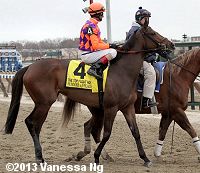 Left: Summer Applause in the paddock. Cherie DeVaux, assistant to trainer Chad Brown said, "She shipped in, she's had no problems with the weather or the climate change and she's been training well the two days she's been here. She looks great and they did a really good job with her in Florida getting her ready to come up here for today." 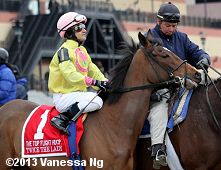 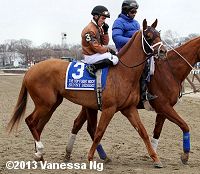 Right: Third place finisher Sunny Desert in the post parade. The 3-1 second choice was 4th early under jockey Joel Rosario then gained late to get third beaten 3 lengths. The John Parisella trainee improved her record to 6 wins, 3 seconds, and 1 third in 12 starts, earning $331,750 for owners Saul and Max Kupferberg.


Immediately before the Gotham, a field of 10 older horses sprinted 6 furlongs in the $200,000 Tom Fool Handicap (G3). Comma to the Top was sent off as the 2-1 favorite off a third place finish in the San Carlos (G2) just one week ago at Santa Anita. In to challenge him included 3-1 second choice Johannesburg Smile, second in the Toboggan (G3) last out, and 6-1 third choice Smash, unraced since fifth in the Vernon O. Underwood (G3) at Hollywood in December. 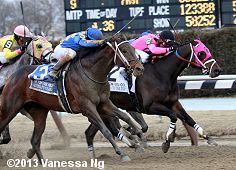 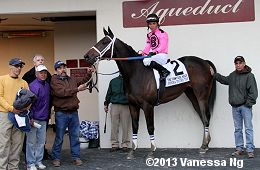 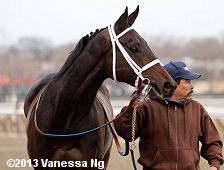 Left: Comma to the Top in the winner's circle. Martin Contreras, assistant to winning trainer Peter Miller said, "The horse performed pretty well last time, so we took a shot, considering the horse came out of it very good. This guy is a tough fighter, and when in he's in his right moment he fights pretty tough. We got lots of luck (on the photo finish). Thank God on that one!"

Right: Comma to the Top heads back to the barn after the race. 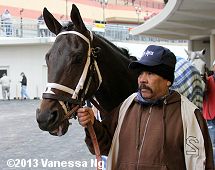 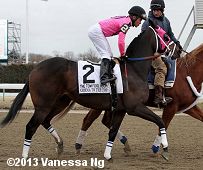 Left: Comma to the Top in the paddock before the race. Jockey Joel Rosario said, "He tries hard, this horse. To come in here and show up like that, he's something special. He hung on there and kept going. I didn't know whether I had won, it was tough. I'm glad for the horse he won."

Right: Comma to the Top in the post parade. 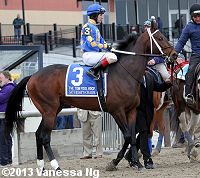 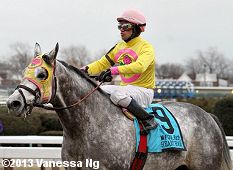 Left: Second place finisher Saturday's Charm heads out for the post parade. The 9-1 shot was 9th early under jockey Junior Alvarado, then rallied well but just missed. The Steve Asmussen trainee improved his record to 3 wins, 2 seconds, and 2 thirds in 9 starts, earning $172,050 for owner Mike McCarty.

Right: Third place finisher Head Heart Hoof returns after the race. The 8-1 shot pressed the pace in second under jockey Cornelio Velasquez, but was outfinished in the final 1/16 to get third beaten 1 length. The Rudy Rodriguez trainee improved his record to 18 wins, 7 seconds, and 4 thirds in 51 starts, earning $490,176 for owners Michael Dubb, Stuart Grant, Gary Aisquith, and Scott Akman.