The first graded Triple Crown prep race in New York is the $400,000 Gotham Stakes (G3), crucial for graded stakes earnings required to draw into the Kentucky Derby field. Overnight rains rendered the Aqueduct inner track muddy early in the card, but it was later upgraded to good. A field of 13 three-year-olds went to post on Saturday in this 1 1/16 mile feature, before just 8244 fans under sunny skies and temperatures in the mid 50's. As expected, Breeders' Cup Juvenile (G1) winner Hansen was sent off as the 4-5 favorite, exiting his first career defeat finishing second in the Holy Bull (G3) at Gulfstream. In to challenge America's champion 2-year-old of 2011 included 11-2 second choice My Adonis, third in the Holy Bull last out, and 10-1 Dan and Sheila, off a fourth place finish in the Lecomte Stakes (G3) at Fair Grounds.

39-1 longest shot King and Crusader went to the early lead under jockey Mike Luzzi and he set fractions of 23.68, 47.51, and 1:11.79 while pressed by Hansen immediately to his outside and My Adonis to his inside. Entering the lane, King and Crusader tired, allowing Hansen to easily take over the lead, with My Adonis giving chase. Hansen opened up by 3 lengths at the 1/8 pole, and preserved that lead to the line, completing the trip in 1:43.84 over the good inner track. It was a long 6 lengths back from My Adonis to late-running 25-1 Finnegans Wake third. 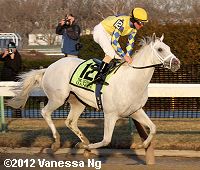 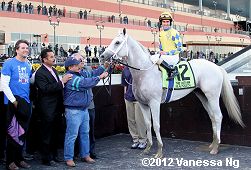 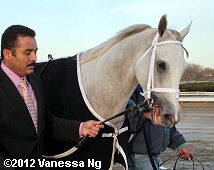 Left: Hansen in the winner's circle with winning owner and namesake Dr. Kendall Hansen on the far left. Dr. Hansen said, "To see him relax and see him finish up strong, that's really what I wanted. This is perfect. I'm a little bit more relaxed when he's tucked in and just tracking another horse and just takes it easy. As far as running on an off track, he's bred for it. Tapits do well on that surface. We don't have to run again (before the Kentucky Derby). We may make that decision, whatever is best for the horse. As long as everything stays on schedule, we'll probably run him one more time. I think 1 1/8 (Wood Memorial) would be good for him to build up to 1 1/4 (Derby)."

Right: Hansen heads back to the barn after the race. Trainer Mike Maker said, "I didn't like losing all that ground, but of more concern to me was he didn't leave the gate as quick as he normally has. But Ramon said it was no big deal, he settled nice and that's what we were looking for. More impressive, he lost all that ground and wasn't rank behind horses and settled. Ramon said on his gallop out, he had to call the outriders to come and get him. Great. He did everything perfect today, and I don't have to be embarrassed after his last race." 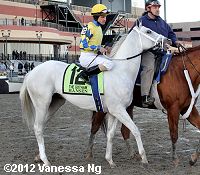 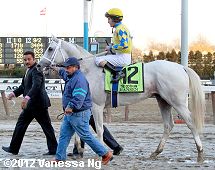 Left: Hansen heads out for the post parade. Jockey Ramon Dominguez said, "He really took the step forward as far as maturing. He actually did it better than I expected – he was so relaxed. Coming to the 3/8 pole when he switched to his left lead and I got after him, he went on beautiful. He really did it as nice as I could expect. I was hoping that he could take the step forward, mind-wise, but he really took it further than I expected. Awesome. Galloped out like a freight train, too."

Right: Hansen circles after the race. Co-owner Dr. Harvey Diamond said, "He ran the race we felt he was capable of running, and I think Mike Maker made the correct move and made some adjustments. Ramon was also very helpful in making those adjustments. Obviously, he isn't a one-dimensional horse. 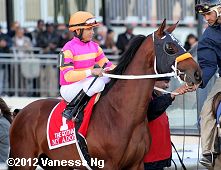 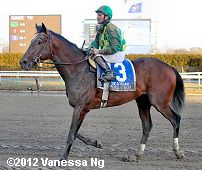 Left: Second place finisher My Adonis heads out for the post parade. Trainer Kelly Breen said, "Hansen is a nice horse. They don't win Breeders' Cup races for nothing. Hopefully we'll see him in (the Wood Memorial) and we'll do all that we can do to try and turn the tides. (My Adonis) will stay here, we have a barn over at Belmont. To me, he looked good; he sat in a good spot and we were outkicked. I thought (Hansen) got caught a little wide, and I thought we got a chance to save all the ground that we were in a good spot, but Ramon did a great job guiding him to where he needed to be and he ran a nice race."

Right: Third place finisher Finnegans Wake returns after the race. The 25-1 shot was last for the first 1/2 mile under jockey Kent Desormeaux, then closed 3 wide to get third beaten 9 lengths. The Dale Romans trainee improved his record to 1 win, 0 seconds, and 1 third in 4 starts, earning $66,230 for owner Donegal Racing.


The first stakes race on Saturday was the $200,000 Top Flight Handicap (G2) for older fillies and mares going 1 1/16 miles on the inner track. It's Tricky was sent off as the 3-10 favorite in the short field of 5, off three straight runner-up finshes in the Alabama (G1), Cotillion (G2), and Breeders' Cup Ladies' Classic (G1). In to challenge her included 4-1 second choice Love and Pride, winner of the Affectionately Stakes last out, and 9-2 third choice Delightful Mary, off a second place finish in the Sunshine Millions Distaff. 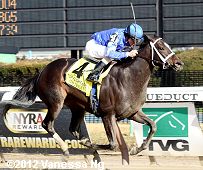 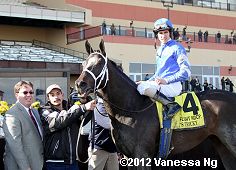 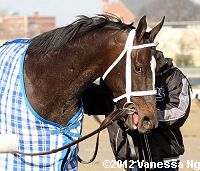 Left: It's Tricky in the winner's circle with rainer Kiaran McLaughlin on the far left. McLaughlin said, "It's nice off four months for her to win. It's kind of a funny track today, maybe drying out a little bit. But she won, and that's important. She's trained great. I give a lot of credit to her exercise riders. Rob Massey was getting on her all winter and she's been very well- behaved. We just thought she does a little better up here, and obviously, talking to Simon Crisford (racing manager for Godolphin Stable), we weren't hooking Royal Delta and Awesome Maria."

Right: It's Tricky heads back to the barn after the race. 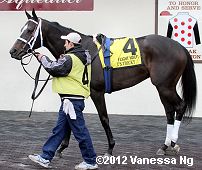 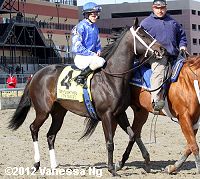 Left: It's Tricky in the paddock. Jockey Ramon Dominguez said, "I really feel like the track is extremely tiring today – very consistent, very good, very safe but tiring. I was watching (Love and Pride) who was coming off a solid effort, and before we hit the hit the 1/4 pole she's already showing signs that she's tiring. She got the lead and got to relax and kind of had everything her way; I just feel that the track is very tiring. (It's Tricky) did get tired the last 1/8; she was kind of wandering around a little bit, but overall I was very happy with her. Especially with her demeanor, how well she handled herself."

Right: It's Tricky heads out for the post parade. 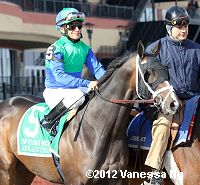 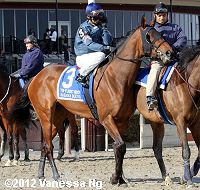 Left: Second place finisher Love and Pride heads out for the post parade. The 4-1 second choice set the pace under jockey Cornelio Velasquez, but was no match for the winner. The Todd Pletcher trainee improved her record to 4 wins, 1 second, and 4 thirds in 9 starts, earning $248,760 for owner Green Hills Farm.

Right: Third place finisher Bahama Bound heads out for the post parade. The 19-1 fourth choice was last early under jockey John Velazquez but rallied late to get third beaten 4 3/4 lengths. The Tony Dutrow trainee improved her record to 5 wins, 3 seconds, and 3 thirds in 18 starts, earning $211,325 for owner Farnsworth Stables.


Immediately before the Gotham, a field of 6 older horses sprinted 6 furlongs in the $200,000 Tom Fool Handicap (G3). Emcee was sent off as the 6-5 favorite, undefeated in 2 starts and making his stakes debut here. In to challenge him included 2-1 second choice Caleb's Posse, making his first start of 2012 after winning the Breeders' Cup Dirt Mile (G1), and 7-2 third choice Calibrachoa, winner of the Toboggan (G3) last out.

10-1 Royal Currier and Emcee battled on the front end down the backstretch through quick fractions of 22.44 and 44.92 over the good track, while stalked by Calibrachoa. Royal Currier continued to lead to mid-stretch through 5/8 in 56.75, but he tired badly as Calibrachoa inherited the lead, and was all out to hold off late-running Caleb's Posse by a neck in 1:09.07. It was another 3/4 length back to Emcee third. 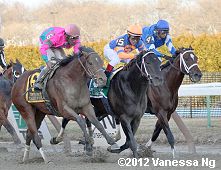 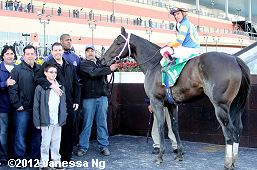 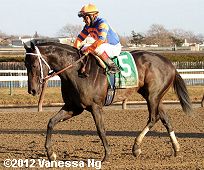 Left: Calibrachoa in the winner's circle. Trainer Todd Pletcher said, "That was very exciting. I was getting very nervous when Caleb's Posse was making his move, because we've seen that before. So, we were happy to see the wire when we did. He's been a great horse for us. He's awfully consistent, loves the inner track and is a real cool horse to be around. He's got a lot of character, and a lot of heart. If he's doing well, we'll look next at the Carter."

Right: Calibrachoa returns after the race. Winning owner Mike Repole said, "It was nice to see that he was consistent, and if we can get the Carter moved to the inner track, I'm going to feel really good next month. He's just a nice horse. He's won this race back-to-back now, and the Toboggan back-to-back, which is cool." 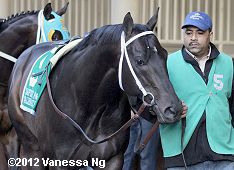 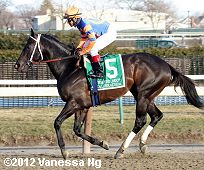 Left: Calibrachoa in the paddock before the race. Jockey Cornelio Velasquez said, "I had a good position. I had a good hold, and I tried to not put pressure on Emcee. Caleb's Posse is a Grade 1 horse and he was closing fast, but my horse tries hard every time."

Right: Calibrachoa warms up before the race. Owner Mike Repole added, "He doesn't have the big name, but I think this is his year. I think he's going to be one of the best sprinters in the country this year. Uncle Mo watched the race from his stall in Lexington and he was happy that one of his stablemates was able to hold off Caleb's Posse." 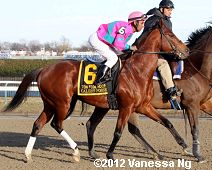 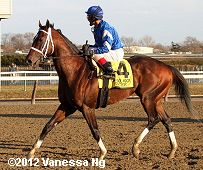 Left: Second place finisher Caleb's Posse in the post parade. Trainer Donnie Von Hemel said, "He ran a good race. He just ran out of ground. It was a big effort, and I'm very happy with him. The Carter is still the plan." Jockey Rajiv Maragh added, "He ran a great race. He made his big run that he always makes, he had a lot to make up, and just didn't get there today. I don't think it was a bad effort; I think it was a really good effort, unfortunately he was second."

Right: Third place finisher Emcee returns after the race. The 6-5 favorite stalked the pace under jockey John Velazquez and held on to finish third beaten just a length. The Kiaran McLaughlin trainee improved his record to 2 wins and 1 third in 3 starts, earning $75,500 for owner-breeder Godolphin Racing.