The first major Triple Crown prep race in New York is the $250,000 Gotham Stakes (G3). A field of 7 three-year-olds went to post on Saturday in this 1 1/16 mile inner track feature, before just 7114 fans under overcast skies and temperatures in the low 50's. Stay Thirsty was sent off as the 9-10 favorite, unraced since finishing fifth in the Breeders' Cup Juvenile and winless since breaking his maiden last August. In to challenge him included 8-5 second choice Toby's Corner, winner of three straight including the Whirlaway Stakes last out, and 7-1 third choice The Fed Eased, winner of a maiden race in January.

Jockey Jose Valdivia Jr. sent The Fed Eased to the lead first time past the stands and he set fractions of 24.79, 49.18, and 1:13.47 over the fast track while being stalked by 47-1 Norman Asbjornson a length behind. Jockey Ramon Dominguez kept Stay Thirsty in midpack fourth 3 lengths off the pace. Entering the stretch, Stay Thirsty moved out to challenge the leaders, passing the tiring pacesetter inside the 1/8 pole. Stay Thirsty crossed over in front of and then drew off from Norman Asbjornson to win by 3 1/4 lengths in a time of 1:44.78. It was another length back to late-running Toby's Corner third. Julian Pimentel aboard Norman Asbjornson claimed foul against Ramon Dominguez but the objection was disallowed. 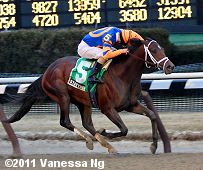 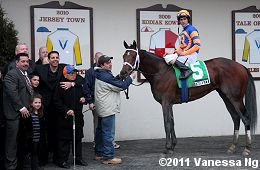 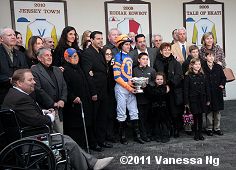 Left: Stay Thirsty in the winner's circle. Winning trainer Todd Pletcher said, "I thought he ran huge. He's coming in off only 5 breezes, going 1 1/16, and he hasn't run since November 6. It was very encouraging. I was a little concerned when he broke just a step slowly, sort of tossed his head at the break, but he recovered real quickly and put himself in a good spot. I was very, very pleased with the way he finished up. Ramon said he was very handy and was there every time he called on him. He was impressed, as we all were."

Right: The trophy presentation for the Gotham. Winning owner Mike Repole (left of the jockey) said, "I couldn't be any happier for this horse, because I keep hearing about 'Mo's shadow' and 'stablemate' and this is one of the top six 3-year-olds in the country. Today is all about Stay Thirsty and I think he proved that when you get away from Boys At Tosconova and you get away from Uncle Mo, this is a pretty special horse. Uncle Mo will go to the Wood Memorial and Todd and I will discuss the two options for Stay Thirsty, probably either the Arkansas Derby or the Florida Derby." 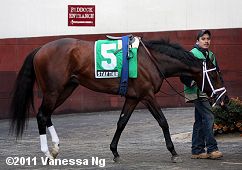 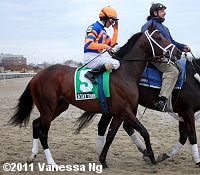 Left: Stay Thirsty heads out for the post parade.

Right: Stay Thirsty in the paddock before the race. Winning jockey Ramon Dominguez said, "At the very last second he threw up his head and missed the break. On the second jump I barely got after him and he got into the race pretty good, but he was also very relaxed at the same time. That's always a concern after they break like that - after you encourage them to get into the race they might get too rank. Turning for home he was drifting in slightly, but there was barely any contact. I was very happy with him. He gave me whatever I asked him, and he galloped out very strong, too." 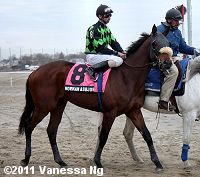 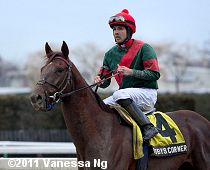 Left: Second place finisher Norman Asbjornson heads out for the post parade. His trainer Chris Grove said, "It was a bigger effort than I expected coming off the 60-day layoff. I was happy with him. Our goal is the Preakness, not the Derby, but we might be back for the Wood. I haven't decided yet." Jockey Julian Pimentel added, "(Stay Thirsty) came over on me, he wasn't clear. I know he was much the best and he was going by me, but he still came over on me. Otherwise, everything went really well and the horse ran well. It set up for us, he was going along pretty easy, he just ducked in when I asked him to run."

Right: Third place finisher Toby's Corner returns after the race. His trainer Graham Motion said, "I was a little disappointed he didn't get up to finish in the top two, but I think he showed he belonged with those horses. He ran a big race last time in the Whirlaway and a lot of handicappers thought he might regress off that race, and I think he may have regressed a little. I've always taken it one step at a time with him, and I think it'd be asking a lot to come back in the Wood."


The co-feature on Saturday was the $150,000 Tom Fool Handicap (G3) for older horses sprinting 6 furlongs on the inner track. The two-horse entry of Toboggan and Gravesend Stakes winner Calibrachoa and stablemate Have You Ever was sent off as the 1-2 favorite over 3-1 Flat Bold and 7-2 Deputy Daney, each coming off an allowance win.

Jockey Jeremy Rose sent Deputy Daney to the lead down the backstretch and he set fractions of 21.63 and 44.03 while as many as 2 1/2 lengths in front of Have You Ever who sat second. Deputy Daney continued to lead to mid-stretch through 5/8 in 56.82, but Calibrachoa, who raced third some 7 lengths back early, passed the tiring pacesetters inside the 1/8 pole to win going away by 4 1/2 lengths over late-running Fastus Cactus in 1:09.67. It was another 4 lengths back to Deputy Daney third. 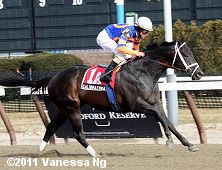 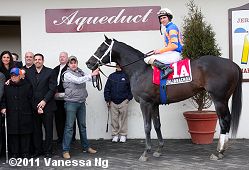 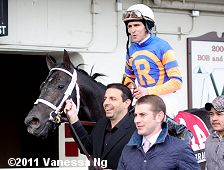 Left: Calibrachoa in the winner's circle.

Right: Winning owner Mike Repole leads Calibrachoa to the winner's circle. Winning trainer Todd Pletcher said, "He's been very consistent and a good horse to train, and we're just happy to have him. Ramon sensed that they were flying early, so he just let him settle and he relaxed really well. Even though he was far back, when the fractions are that fast, he was in the race fine. You could see when they started to come back to him it was the same time he was starting to find his stride, and so he made up a lot of ground in a short period of time. It looked like he won with something left. We'll look at the Carter next." 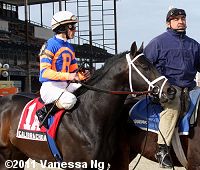 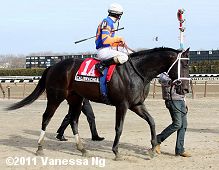 Right: Calibrachoa returns after the race. Winning jockey Ramon Dominguez said, "I was trying to slow him down as much as I could. I knew the horses in front of me were going extremely fast, and I just didn't want to fall into chasing and then having someone close on me. I certainly at no point in the race wanted someone to take my position, but at the same time I was trying to reserve as much as I could. I was actually surprised at how much they opened on me. My horse finished up pretty strong." 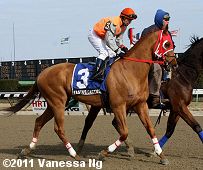 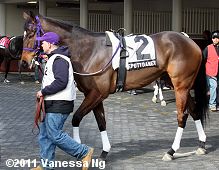 Left: Second place finisher Fastus Cactus in the post parade. The 54-1 longest shot raced fourth 8 lengths off the pace early under jockey Jose Espinoza, saved ground on the turn, and passed tiring horses late to get second beaten 4 1/2 lengths. He improved his record to 7 wins, 1 second, and 3 thirds in 17 starts, earning $179,752 for owner-trainer Naipaul Chatterpaul.

Right: Third place finisher Deputy Daney in the paddock. The 7-2 third choice shook off "rabbit" Have You Ever down the backstretch under jockey Jeremy Rose after a brief duel, led to the 1/8 pole then tired badly to finish third beaten 3 1/2 lengths. The Hugh McMahon trainee improved his record to 5 wins, 2 seconds, and 1 third in 11 starts, earning $168,370 for owner Danny Limongelli. 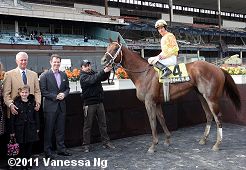 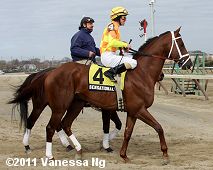 Left: Sensational Slam in the winner's circle with trainer Todd Pletcher on the left. Pletcher said, "The horse was training well so we were optimistic, but it was the first time we had run him on the dirt. This looked like a good place to give it a try. The race unfolded like we thought it would. We thought there'd be plenty of pace, and he's not a real ambitious horse, especially early on. I just told Ramon (Dominguez) to let him settle, and when it came time to give him an encouraging ride. I think the Bay Shore makes sense. He seems to like Aqueduct, and we'll see if he likes the main track."

Right: Sensational Slam heads out for the post parade.


Kicking off the stakes action on Saturday at Aqueduct was the $65,000 Broadway Stakes for New York-bred older fillies and mares sprinting 6 furlongs. 9-10 favorite Meese Rocks was quickest away under jockey Junior Alvarado and set fractions of 23.21, 46.32, and 58.22 while a length in front. At the 1/8 pole, 19-1 longest shot Big Brownie, who was 3rd early, put in a late bid but Meese Rocks turned her away, extending her lead to win by 1 1/2 lengths in 1:10.62. It was another 2 1/2 lengths back to 6-5 second choice Lots of Stones third. 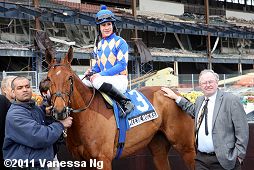 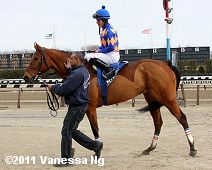 Left: Meese Rocks in the winner's circle with the demolished grandstand in the background. Winning trainer Edward Barker said, "It was a total non-effort last time, and I knew it. She has a lot of heart, this filly, I'll tell you that. I love her. We'll probably give her 60-90 days off and bring her back at the end of Belmont or the beginning of Saratoga."

Right: Meese Rocks returns after the race. Winning jockey Junior Alvarado added, "I had the only speed in the race, so I figured I'd break and let her go. It was completely easy, all the way. I wanted her to switch leads and as soon as she did, she just took off. I didn't even hit her, it was just a nice and easy win."