The $250,000 Gotham Stakes (G3) at Aqueduct Racetrack in New York is the major local prep for the Wood Memorial (G1) and ultimately the Kentucky Derby. A field of 10 three-year-olds went 1 1/16 miles over the inner dirt track on Saturday afternoon before just 4,028 spectators under partly cloudy skies and temperatures in the low 50's. European invader Awesome Act was sent off as the 5-2 favorite, despite being unraced since finishing fourth in the Breeders' Cup Juvenile Turf at Santa Anita. In to challenge the Jeremy Noseda trainee included 7-2 second choice Yawanna Twist, undefeated in two starts and making his stakes debut, and 9-2 third choice Wow Wow Wow, shipping in from Oaklawn Park off an allowance win after disappointing in 8th in the Smarty Jones Stakes.

Jockey Corey Nakatani sent Wow Wow Wow over to the rail and to the lead straight out of the gate, and he set quick early fractions of 22.85 and 46.60 while as many as 1 1/2 lengths in front of 7-1 Peppi Knows and 9-1 Three Day Rush stalking him second and third respectively. Julien Leparoux kept favorite Awesome Act back in 6th about 5 lengths off the pace. On the far turn, both Wow Wow Wow and Peppi Knows tired from the fast pace and faded from contention, allowing Three Day Rush to briefly gain the lead through 3/4 in 1:11.90. However, Awesome Act was just hitting his best stride, going 4 wide into the stretch to pass tired horses to take over the lead at the 3/16 pole. He opened up a 3 length advantage in mid-stretch through 1 mile in 1:37.34, and easily held off late-running Yawanna Twist to win by 1 3/4 length in 1:43.85 over the fast track. It was another 1 3/4 length back to 8-1 Nacho Friend third. 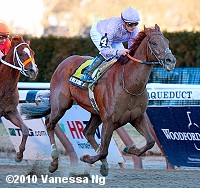 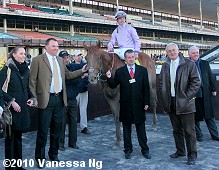 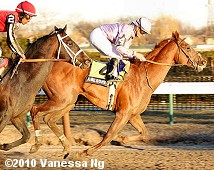 Left: Awesome Act in the winner's circle with trainer Jeremy Noseda in the background on the far right. Noseda said, "He handled the dirt today. You would think a horse by Awesome Again would handle the dirt. For the first time, it's all we could ask for. He's a horse that is reminding me all the time of (2004 Breeders' Cup Juvenile winner) Wilko. I believed in this horse today. It was a good, solid race, but there were no graded stakes winners. It's the first hurdle out of the way, so the dream lives on. We'll be back for the Wood Memorial. He'll stay at Belmont Park, in Steve Asmussen's barn with my team, and get ready for the Wood. We had the discussion about him possibly being a Derby horse after the Breeders' Cup. I stood up and said 'I believe I can do it from Europe.' Now he's been in America, and we can move forward. I will be going back to Newmarket, maybe I'll come in for a day and watch him train."

Right: Awesome Act just past the finish and out of the shadow on the track. 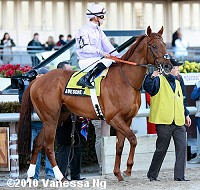 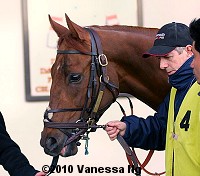 Left: Awesome Act heads out for the post parade.

Right: Awesome Act in the paddock before the race. Winning jockey Julien Leparoux said, "He just did everything perfect. He broke well and appeared to get a good position around the first turn, relaxed on the backside, and he was good. He was beyond good on the dirt; it didn't matter to him at all. He just did everything on his own, he put me in the right spots, and then he just finished very nice. I think more distance will be good." 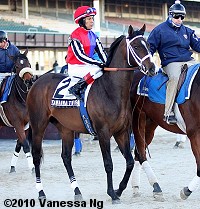 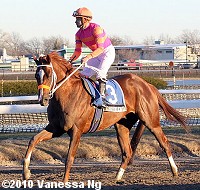 Left: Second place finisher Yawanna Twist heads out for the post parade. His jockey Edgar Prado said, "I'm very happy. I was right behind the winner and when the winner got through I followed him. It was the first time I had to really get in and ride him hard and I think he relaxed and took a couple strides and figured out what to do. He's a very nice horse and I'm very happy with the race."

Right: Third place finisher Nacho Friend returns after the race. The 8-1 shot raced in fourth early under regular rider Joe Bravo, rallied on the turn to get within a head of the lead and finished well to hold third beaten 3 lengths. The Kelly Breen trainee improved his record to 1 win, 1 second, and 0 thirds in 3 starts, earning $55,300 for owners George and Lori Hall.


The other graded stakes on the card was the $100,000 Toboggan Stakes (G3) for older horses. A field of just 5 older horses faced the starter in this 6 furlong inner track sprint, with Wall Street Wonder sent off as the 7-5 favorite off two straight wins, an allowance in December followed by the Paumonok Stakes in January. In to challenge him included 2-1 second choice Custom for Carlos, winner of the Bet On Sunshine Handicap at Churchill Downs followed by the Mr. Prospector Stakes at Gulfstream, and 5-2 third choice Elusive Warning, an allowance winner last out after finishing fourth in the Gulfstream Park Turf Sprint.

Custom for Carlos on the inside and Wall Street Wonder on the outside dueled for the lead down the backstretch and around the turn through fractions of 22.76 and 45.78, with 6-1 Driven by Success stalking them in third in the whole way. The pair continued to battle into the stretch, with Wall Street Wonder poking his head in front at the 1/4 pole. They battled noses apart through the lane, with Custom for Carlos briefly leading at the 1/16 pole, but Wall Street Wonder fought back late to get the win by a neck in 1:09.88. It was a long 5 lengths back to Driven by Success third. 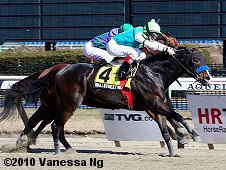 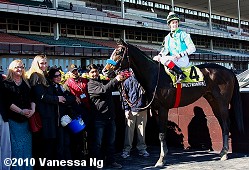 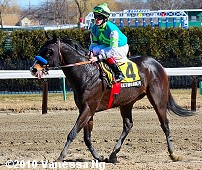 Right: Wall Street Wonder returns after the race. Tonja Terranova, assistant to trainer John Terranova said, "He'd been training super. He showed no ill effects from running so fast last time. Once he breezed last week and went tremendously, we knew that we'd run him. He has a tendency sometimes to wait on horses; I know in the last one he drew clear. Custom for Carlos is a very nice horse and he's been battle-tested. This was a very big effort on our horse's part and we're really proud of him. The Carter is the goal now." 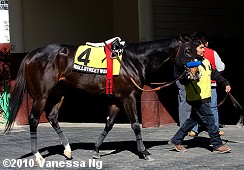 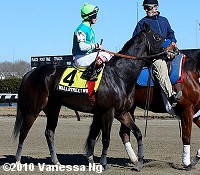 Left: Wall Street Wonder in the paddock before the race.

Right: Wall Street Wonder in the post parade. His jockey Channing Hill said, "He's the kind of horse who will keep his head in front. Today, he got a real class test with Custom for Carlos, and he passed." 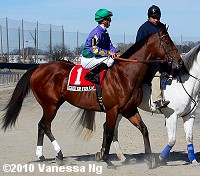 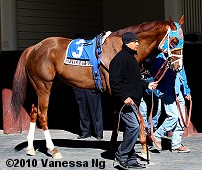 Left: Second place finisher Custom for Carlos in the post parade. His trainer Eddie Kenneally said, "He ran his race. We're happy with the way he performed. There are a few races coming up in the Midwest we'll focus on, but we won't make any decision now." Jockey Julien Leparoux added, "He broke well, and he didn't go too fast the first quarter, which was good. My horse is a big horse; maybe if we were on the outside we would have gained a little bit there, but he was good. We came back on him a little bit at the end."

Right: Third place finisher Driven by Success in the paddock. The 6-1 shot rated in third behind the leaders under jockey Ramon Dominguez, came out three wide for room into the stretch but lacked a significant rally, finishing third beaten 5 1/4 lengths. The Todd Pletcher trainee improved his record to 4 wins, 3 seconds, and 5 thirds in 16 starts, earning $336,619 for owner Repole Stable.


Kicking off the stakes action on Gotham day was the $65,000 Fred "Cappy" Capossela Stakes for 3-year-olds sprinting 6 furlongs on the inner dirt. Castaneda, the longest shot on the board at 6-1, quickly opened a 3 length lead down the backstretch, setting fractions of 22.67 and 45.98, and held that advantage the whole way, cruising to a 3 length victory over 3-1 third choice Strapping Groom in 1:10.48. It was another 5 1/2 lengths back to 8-5 Golden Ghost third, and 10 1/2 lengths more to 7-5 favorite Liston in last. 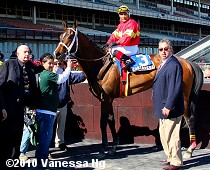 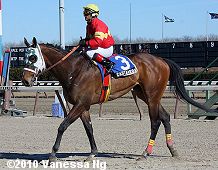 Left: Castaneda in the winner's circle with trainer Gary Contessa at his hip. Contessa said, "It was not my thought to come into this race, but when we heard it was going to be a light field, we decided to enter. This horse has just found himself sprinting. He's a good horse and a New York-bred as well. He probably could use a little time off after this race, but he might be Bay Shore material. We'll see."

Right: Castaneda returns after the race. His jockey Jorge Chavez said, "I didn't expect to be in the lead but he did it so easily. I said 'Well, I have to do what I have to do.' It wasn't my plan but sometimes if plan A doesn't work out you have to take plan B."